I have written about child stealing before – specifically the crime of stealing children in order to rob them of their clothes and the kidnappings of Thomas Dellow and Joseph Charles Horsley.

These two cases, from 1816 and 1817, are very different from each other, but both involved the theft of children from working class families in pre-planned deceptions.

The first took place in Bristol in 1816 and, as far as I can tell, was never resolved in the courts. 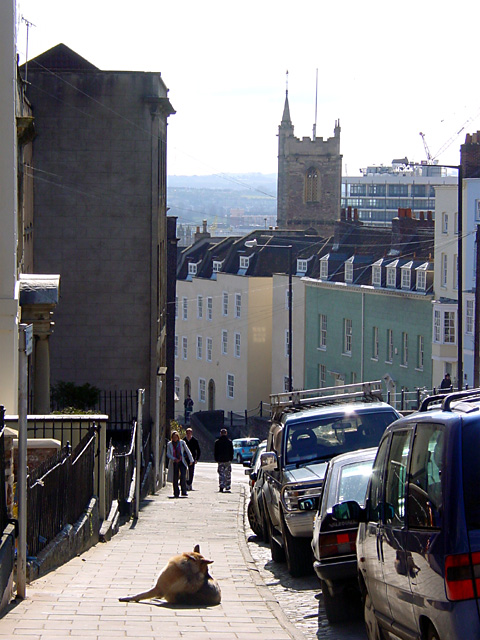 CHILD STEALING
The following extraordinary circumstance took place in Bristol, on Tuesday se’nnight. About five in the evening a female, of genteel appearance and address, calling herself the Right Hon. Lady Gwynne, came to the house of Reuben Bond, a journeyman cooper, on St. Michael’s-hill, requesting to see Bond’s wife, who had been brought to bed of a daughter three days previously. After many inquiries, and much apparent anxiety for the situation of the family, she proposed giving some cast off clothes for the other children, and left a letter of recommendation to a most respectable lady at Cotham. She next begged that the nurse might take the child to her house, as she would clothe it in a handsome manner, and also send some clothes for the other children. Imposed upon by her specious appearance, and her apparently benevolent intentions to the whole family, the nurse was permitted to take the child agreeably to her request. On leaving the room she gave Mrs. Bond a dollar and a three-shillings piece. When they had proceeded to the end of Church-lane, the Lady said she had forgotten to ask the ages of the other children, and taking the child from the nurse, sent her back to make inquiry, bidding her come to the house at the bottom of Lodge-street. The nurse did as directed, but on her return, the Hon. Lady Gwynne had disappeared with the child. Lady Gwynne is rather under the middle size, dark complexion and hair, and wore a black silk gown; black bonnet and a white lace veil. The Police have been very active in their endeavours to trace her retreat, but hitherto without effect.

The infant which was artfully stolen from its mother a few days ago at Bristol, by a genteel woman, calling herself Lady Gwynne, has been restored to its now happy parents, by a woman, who says it was placed with her to nurse. She has been twice examined by the Magistrates, and remains in custody for a final hearing.

After that there is nothing. It is likely that the genteel lady was not Lady Gwynne but an imposter. Can we assume that Lady Gwynne was quietly allowed to return to her family?

An intriguing story about Lady Gwynne (if it is the same person) appeared in the papers three years later. She was as one of the guilty parties in a scandalous prosecution for criminal conversation. Her husband Thynne Howe Gwynne sued his cousin Sackville Frederick Gwynne for his adultery with his wife, Lady Georgiana Gwynne (neé Devereaux, a daughter of the 13th viscount Hereford). As far as I can tell, she died childless, in 1861. 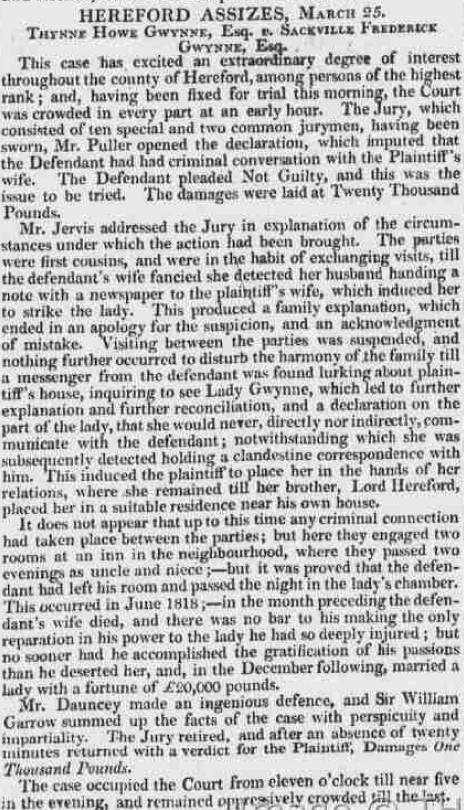 The second case concerns the theft of a baby boy from a poor family in Kensington in west London. 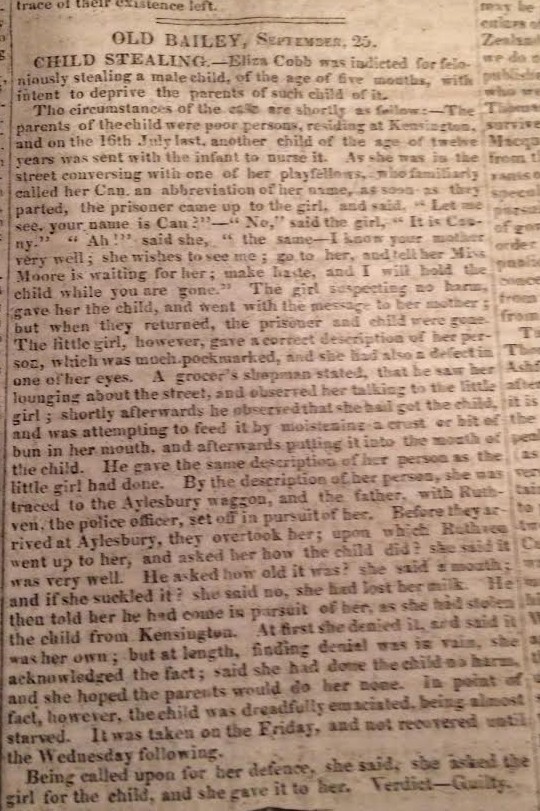 Eliza Cobb, aged 17,  stole the 16-week-old son of William and Sarah Canning from his 12-year-old sister Sophia in Kensington on 16 August 1816. She had approached Sophia in the street and asked her to take a message to her mother. Suspecting nothing the child handed over the baby to Eliza and went off.

When the ruse was discovered Mr Canning, accompanied by Ruthven, a Bow Street police officer, went in pursuit, and tracked down, five days later, on the road to Aylesbury (according to The Observer; the Old Bailey record states Arlesford, in Hampshire). The child was very emaciated.

In her defence Eliza Cobb merely said that she had asked for the child and been given it. No motive was discussed in court, and Eliza was not accused of stealing the baby’s clothes.

She was sentenced to transportation for seven years. She arrived in Australia on board the Maria a year later. She married John Fawkner four years later.