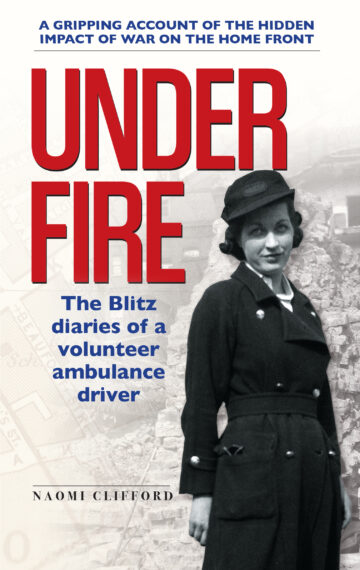 “We would say to each other ‘here it comes’ and would listen to the whining whizz which sounded like it was for us every time.”
Danvers Street Ambulance Station, 8 September 1940

LONDON IN THE SUMMER OF 1940
June Spencer volunteers for the London Auxiliary Ambulance Service in Chelsea. Every night she writes up the day’s events in her diary, whether it’s driving in a hail of incendiaries, peeling potatoes for the crews, or loading broken and bleeding victims into her ambulance.

She also records her hectic social life – dining at the Ritz, dancing at the Café de Paris and partying with the artists, writers and aristos in her set. But below the surface is turmoil and heartache: dear friends killed in action, relationships cracking under pressure and a growing dissatisfaction with her role in London.

Using June’s vivid first-hand accounts of life in the thick of the Blitz, Naomi Clifford paints a vivid picture of a young woman navigating the perils of home front life.

Under Fire is available via Amazon as a print book and ebook (Kindle and other formats).

This is a riveting account of the dark and terrifying days of the London Blitz. Naomi Clifford has used June Spencer’s diary entries, most of which are a record of what she did, where and when, as a framework for a rich evocation of the tensions, horrors, fear and occasional tedium of her work as a London Ambulance Driver during the horrific and deadly bombings. June was a newly presented debutante, thrown into the most gruelling and heart-breaking work when war broke out. As a survival mechanism, after working all day, she and many like her threw themselves into a whirlwind of parties, dances, soirees and chance encounters. Clifford’s meticulous research unveils and brings alive the places, people and events of this double life, in a story that is as gripping and tense as any novel.

Wow–Naomi Clifford has done some serious research to write this book. “Under Fire” features diary excerpts from June Spencer, an upper middle class British woman who lived in London and drove an ambulance during WWII, including during the blitz. I’ve read other diaries where the entire book is the person’s diary. Instead, most of this book is Clifford’s in-depth research about June Spencer and what her life was like, with brief diary entries (Spencer was not effusive) throughout.

Under Fire is what you experience as you race through Naomi Clifford’s account of a woman volunteer ambulance driver during WW2. Based on June Spencer’s diaries, her brief entries are examined and embellished with historical detail. The result is an enthralling world of a young woman thrust into the exhausting horror of the Blitz.

In 1938, June Spencer was a beautiful debutante who made her own ball gowns with talent and style. A creative upper-class girl brought up on a Hertfordshire estate, she sold her unique embroidered belts to Harvey Nichols and fashion houses. What struck me most while reading was the dizzying contrast between high society events with the hell of pulling severed limbs and corpses from rubble. Thick on imagery, the pages skip from balls at Grosvenor House for 1000 people to the tragedy of the Café de Paris. She observes in her diary that after leaving Grosvenor House she walks past the destruction of the feted night club – ‘Someone had come out alive and come in to dance at the 400. It made very little visible impression on anyone.’

The effect on the human psyche is unimaginable, and through June’s pithy diary entries one conjures a kind of dance macabre – or Dance of the Red Death – because dancing is everywhere and constant. One sentence will record ‘between 70 and 80 were killed’ and then in the next breath she will be dining, having tea or swimming at Hampton with French film stars. How quickly they became anaesthetised from the carnage that surrounded them is shown with the motif of a parachute – given to June to make a dress from. It is still spattered with the blood of the German airman that was shot down. The unpicking of the silk stitches is an ongoing task and one which various friends and suitors take part in between diving out between bombing attacks and rescuing what life remains from the blasts.

She has an entertaining array of uniformed lovers who drift in and out of her life with the unpredictability of wartime. But Clifford emphasises the impact on June’s health; as the war continues she becomes frequently ill with headaches, exhaustion and an unexplained malaise.

The immensity of their trauma, the constant bereavement, rationing and sleep deprivation over a long period of time must have had a devastating psychological impact. June lost weight, so much so, that she recounts with a laugh that her knickers fell down in the middle of the dance floor! A scintillating read, packed full of anecdotal detail and truly humbling.

I’ve read all of Naomi’s books, I really like her style of writing and her in depth research. I liked the way she wove June’s diary entries in with other sources and created a timeline of events of June’s life during the Blitz. I love reading about the lives of different types of people at various points in history and June deserves to be remembered as much as anyone else, famous or otherwise. I wonder what she would have thought of us reading her diary entries? I hope she would have been pleased that her experiences and life were considered so important as to be recorded in such a respectful and readable way by Naomi Clifford. I can’t wait to know who Naomi will write about next.

This is not only a compelling read that makes you feel you are living through those terrifying and exhilarating times but Under Fire tells a story of the Blitz I don’t feel I’ve heard before. Naomi Clifford’s thorough research adds depth and historical context to the real diaries of debutante June Spencer. I cannot recommend this book highly enough.

All Naomi Clifford’s books are superby researched and bring to life the fascinating stories of hidden women in our history. I think that this is the best one yet. Perhaps it’s the access she had to such rich and personal source material that makes it such a moving and compelling read. The story telling, full of fascinating social detail, is gently captivating. Thoroughly recommended.

Socialite and Chelsea girl June Spencer is set to follow the time-worn path of a debutante, but when war comes to London she volunteers to drive an ambulance through the bomb-strewn city streets. Off duty, her gilded life of shopping, dancing and partying disguises a struggle to contain her true feelings.

Naomi Clifford paints a compelling picture of life on the home front and unpicks the minute clues in June Spencer’s diary to reveal the whole story behind the stoicism of Blitz Britain. Her book offers a fresh perspective on life in London in wartime. It is an eye-opening exploration and a riveting read.