The events surrounding the snatching of a little boy in London in 1818 had many elements of a 19th-century melodrama. The black-hearted villain, the wronged middle-class family, the cruelly deceived maidservant, the devoted father…

On Sunday 8 November, at two in the afternoon 16-year-old Elizabeth Holbrook, a nursery-maid working for the Horsley family at 3 Canonbury Lane, Islington, took two of her four young charges, Joseph, 3½, and his sister Sarah, 18 months, out for some air. She knew she was not allowed to take the children out of the neighbourhood but on that day she deliberately disobeyed her employers and headed for Smithfield, an hour’s walk away, to meet her fiancé.

George Faulkner, who had recently befriended Elizabeth in the street when she was out with the children, wanted to marry quickly, but first he had business in Birmingham to attend to – he had to claim a legacy, which would set them up properly for married life. He gave Elizabeth £2 and told her to take the coach and wait for him. He would follow shortly, and once the legacy was sorted, they would be married immediately. His job now was to return these toddlers to their parents.

By four o’clock, back at Canonbury Lane, merchant and shipbroker Joseph Horsley and his wife Sarah Elizabeth were becoming anxious. When night fell, Mr Horsley and his servants and neighbours started to search the area. There was no sign of Elizabeth nor of the children. The Horsleys began to fear the worst: that Elizabeth had fallen ill or been attacked or was even murdered. There was also a nagging fear that a particular person, Mrs. Horsley’s first cousin, 28-year-old Charles Rennett, who had a long-standing grudge against them, was involved. They had inherited property that he felt should be his and had given him a substantial sum in compensation, but this had proved inadequate for his dissipated habits.

The next day brought good news, at least in part. The little girl had been found. The landlady of a pub at St. George’s Fields in south London, four miles from Islington, had found her on the pavement, still strapped into her chaise, and taken her in for the night. Of Joseph Charles there was no sign.

Three days after she boarded the coach for Birmingham, Elizabeth returned to London and the Horsleys. Her money had run out and, when Faulkner failed to appear, she realised that she had been duped. She confirmed the Horsleys’ suspicions. Charles Rennett had abducted their son. He and George Faulkner were one and the same.

Mr. Horsley soon discovered that Rennett had embarked at Dover for Calais and obtained a passport for Flanders. He set off immediately in pursuit. And although Rennett had tried to fool his pursuers by zigzagging across Holland and Belgium by 23 November he was tracked down to Braake in the Duchy of Oldenburg in north-west Germany. He had had possession of little Joseph for two weeks.

In London, Rennett’s wife was arrested and incarcerated in the House of Correction with her young son, on suspicion of being involved in the kidnapping.

On 13 December The Observer published an account of the arrest and detention of Rennett and of Mr. Horsley’s return to London with Joseph.

ARRIVAL OF MR. HORSLEY AND CHILD
It is with great pleasure we state, that Mr. Horsley’s little boy has been re-conveyed to England; and was restored to his mother and other relations on Sunday evening. The child came with his father in the Leicester packet from Cuxhaven, and arrived at Cromer on Sunday morning. Thence they posted to Canonbury-lane, Islington, which they reached between five and six in the evening. The child is in good health, and its first words, on being restored to his maternal parent was, “Ah, Dear Ma! –Dear Ma!”

BOW STREET OFFICE. –Wednesday, about half past twelve, Mr. Horsley entered the office, and thanked Mr. Birnie, the magistrate, who was then sitting, for the assistance he had rendered him in the pursuit of his child. The Municipality of Braka behaved uncommonly well in the business. Rennett having applied for a passport to go to Baltimore, he was asked if he had any person with him, to which he replied in the negative, adding, however, only a child, his son. He was told the child must be seen, as they must be both fully described in the passport. Rennett replied he would go and fetch the child; he was told, if he would say where his hotel was, the child should be fetched, it being strongly suspected that Rennett was the man who had stolen the infant. An officer was sent to the hotel where Rennett described himself to be lodging, took possession of the boy, and conveyed him to the municipality, who took great care of him till the arrival of Mr. Horsley, when the boy was delivered up to him. Charles Rennett was detained in custody, and on his coming into the presence of Mr. Horsley, he fell on his knees, and begged for mercy: he acknowledged that his object in stealing the child was to lay Mr. Horsley under contribution to obtain the child again, although Mr. Horsley states, that he gave him £3000 some time since.

Mr. Horsley applied to Mr. Birnie for the discharge of Mrs. Bennett, the wife of Chas. Rennett, who had been confined in the House of Correction, on suspicion of being concerned with her husband. Mr. Horsley being now convinced of her innocence, prayed for her discharge: she has in consequence been liberated.

Braka, where the child was recovered, and Charles Rennett was taken, is under the Government of Oldenburg; and on Mr. Horsley leaving the office, he proceeded to the Secretary of State’s office for the colonial department, in Downing-street, to apply to Earl Bathurst for the necessary official documents to be transmitted to Braka, authorising the officers of the government to deliver Charles Rennett into custody, to be brought to England to take his trial.

Mr. Horsley appeared in much worse health than when he left England, owing to his harassing journey and agitation of mind, although on the magistrate enquiring respecting the state of his health, he replied he was very well. He also said his recovered child and Mrs. Horsley were in good health.

On Monday Mr. Horsley’s house in Canonbury-lane, Islington, was thronged with carriages and pedestrian visitors, anxiously inquiring respecting the health of the child. Great curiosity was excited to see the infant. 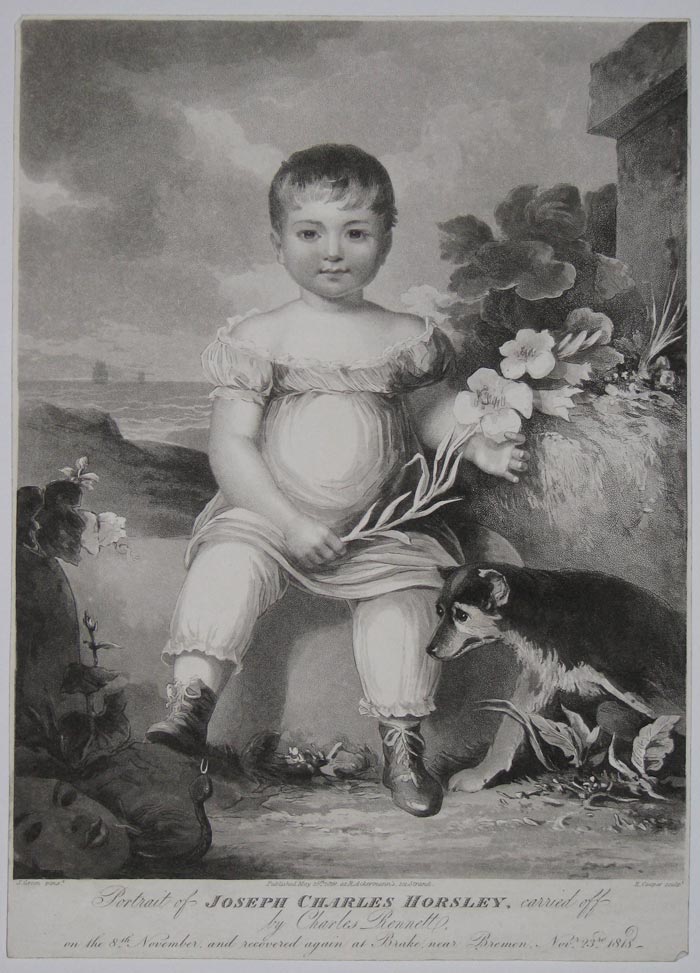 The Observer‘s account does not make it clear that Mr. Horsley not properly reunited with his son for an agonising six days while the authorities confirmed that he was the father.

In May 1819 Rennett was tried at the Old Bailey. He called no witnesses but read a statement outlining his claim to the property in question. The jury found him guilty and Justice Bailey sentenced him to seven years’ transportation to Australia. He was discharged in 1825. I can find no further trace of him.

Old Bailey Online has a verbatim record of Rennett’s trial and includes his self-serving statement pleading to the jury for understanding of his cause.

A sad addendum is that Rennett’s own infant son died in prison when he was incarcerated along with his mother. My guess is that Charles Rennett’s wife was Mary Ann Bevan, who married him while still a minor, in 1816 at St. Mary, Lambeth1. There is a baptism record for Mary Ann Rennett, daughter of Charles and Mary Ann Rennett, for February 18182

See also Thomas Cromwell, Walks Through Islington: Comprising an Historical and Descriptive Account of that District, both in its Ancient and Present State. Sherwood, Gilbert and Piper, London 1835