Education was not compulsory in Britain until 1880. Until then, there were many options, of varying quality: Dame schools, Sunday Schools, National schools, British Schools, ragged schools… And in parallel, the endowed schools such as Eton, cathedral schools, grammar schools, and commercial establishments such as the plethora of boarding schools. In accordance, here are six fairly random portrayals of school life. How far they reflect the truth, I cannot say.

Londoner Thomas Webster (1800–1886), known as a painter of genre scenes and especially of ‘schoolboy life’, produced this study when he was about 20, before he was admitted to the Royal Academy. He showed an astonishing talent for capturing, in impressionistic brushstrokes (aren’t the jackets on the wall wonderful!), the chaos of a one-room village school full of mischievous boys: on the right, a desk is upset, someone sports a dunce hat in the centre, while the rather aloof schoolmaster, complete with hat and spectacles, calmly peruses a newspaper, probably while admonishing the boy called up to ‘see me’. 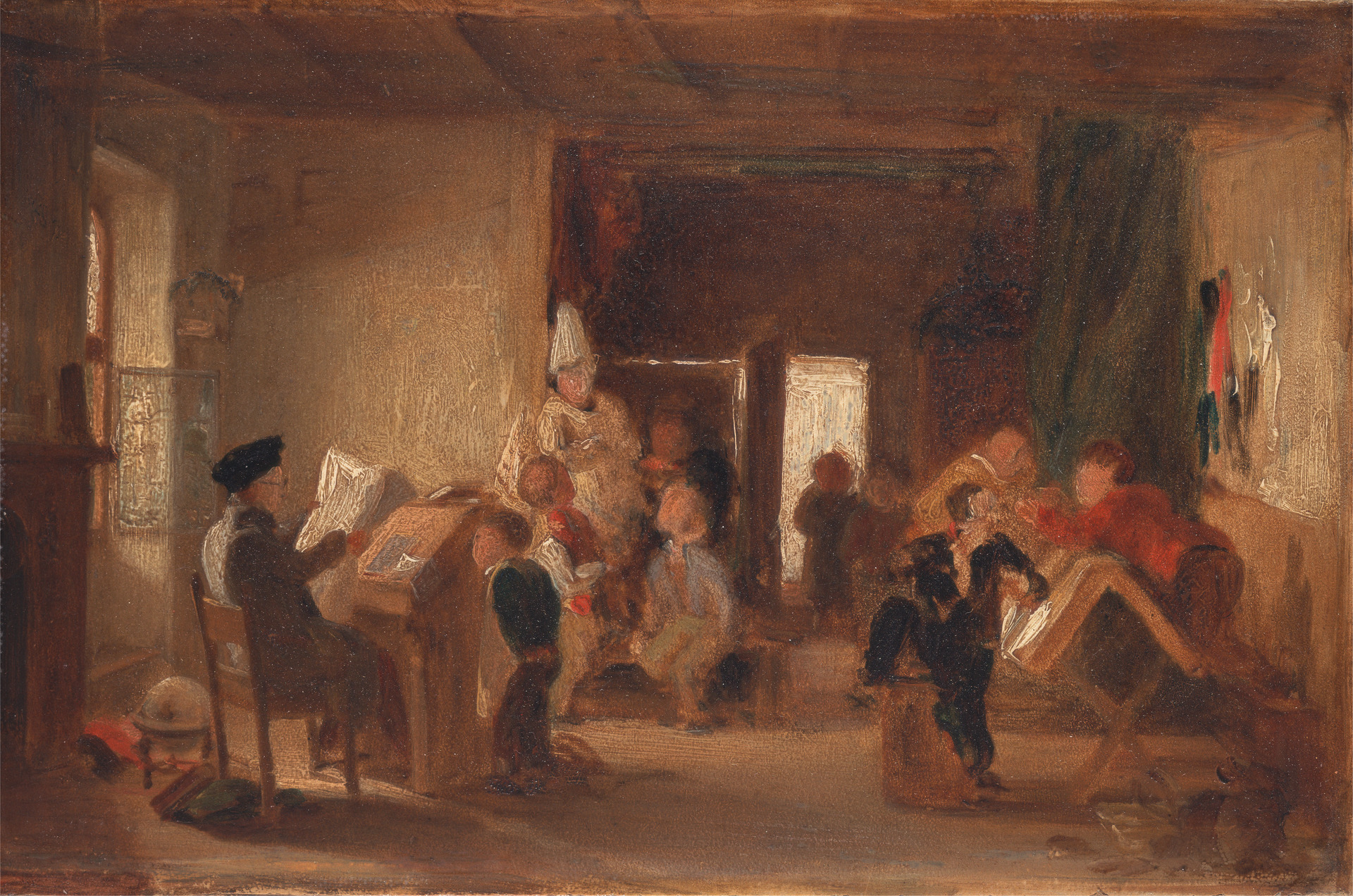 I’m not sure exactly what kind of school is depicted in the next image, a cartoon by an unknown artist – possibly a grammar school as it looks well equipped (note the tomes in the top right and the exercise books on the floor) and the master and pupils do not look particularly underfed or impoverished. The boys start a riot the minute the master is out of the room.  Then he’s back, cane at the ready. One boy is apeing him by wearing his glasses and brandishing a switch, another chalks a cruel caricature. Through the window, lies nature and freedom, a contrast with the confines of the classroom. Eton famously erupted into riot in 1818. 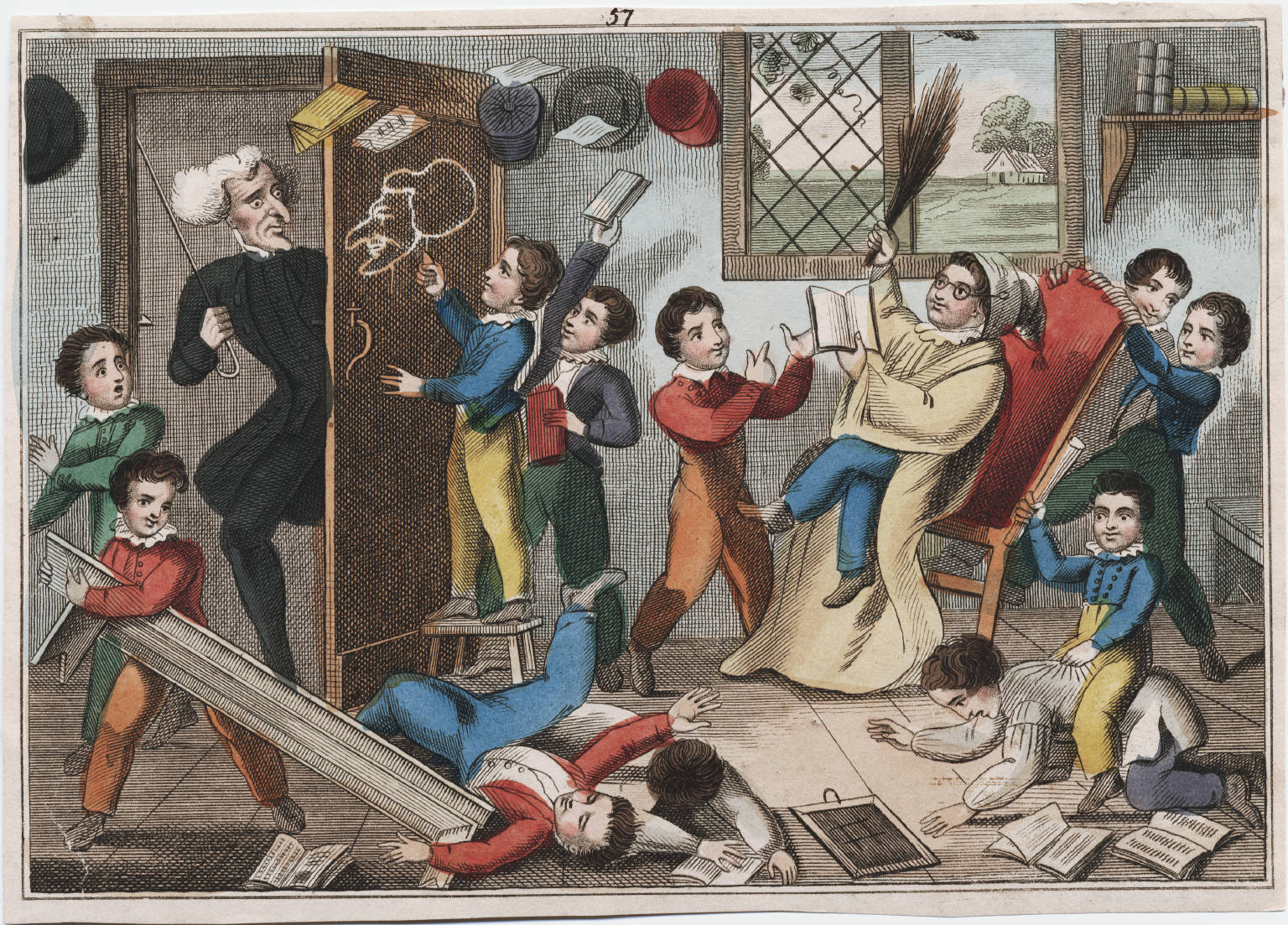 Anonymous, The schoolmaster’s Return, 1825. Courtesy of the Lewis Walpole Collection. Note the similarity of the schoolmaster to Dr Syntax in Rowlandson’s print below.

James Miller’s 1780 watercolour of Dr Fountain’s Boarding School in Marylebone’s Old Manor House (it stood opposite the Old Church, which is still there), appears to show a real event. The commotion caused by the arrival of a camel, perhaps in the possession of a travelling circus, outside the school gate. The boys coming running out to take a look, as other members of the community also congregate including two beautifully drawn ragged girls. Boarding schools were for-profit businesses (as the Yorkshire schools scandal showed so clearly). They were set up and failed regularly, much like restaurants do in our economy. 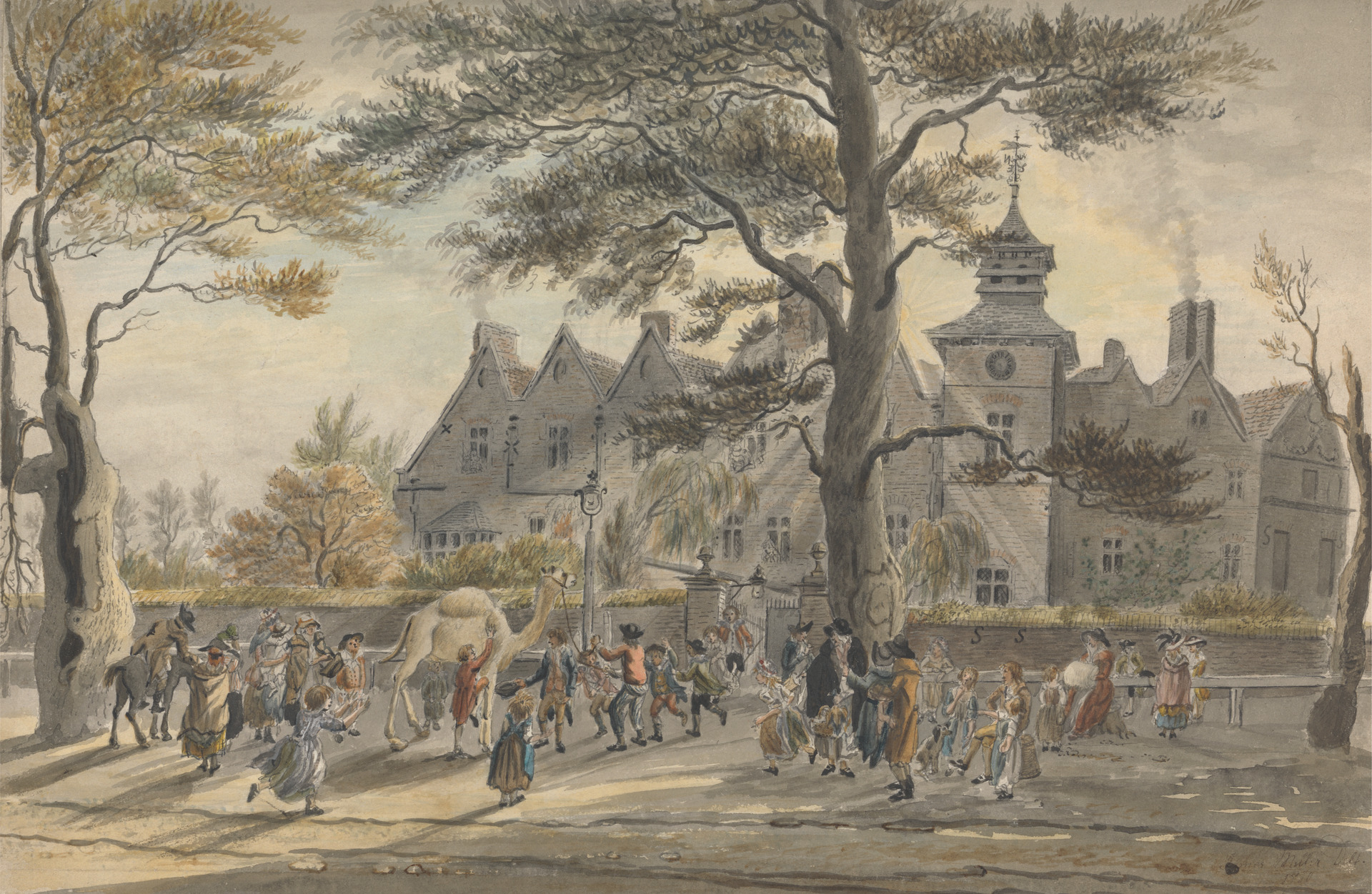 Dr Fountain’s later became a boarding school for girls. I have previously blogged on the role of girls’ boarding school establishments,[ref]On Geri Walton’s website.[/ref] which provided a route up the social ladder for aspirational families. James Gillray’s satirical print in which Farmer Giles and his wife attempt to use their daughter’s faltering piano playing to impress their rather uninterested neighbours in the drawing room at Cheese Farm. You can practically hear the sneers echoing across time.[ref]The Wonderful Dromedary and Surprizing Camel by Joanne Major has fascinating detail on the possible background to this scene.[/ref] 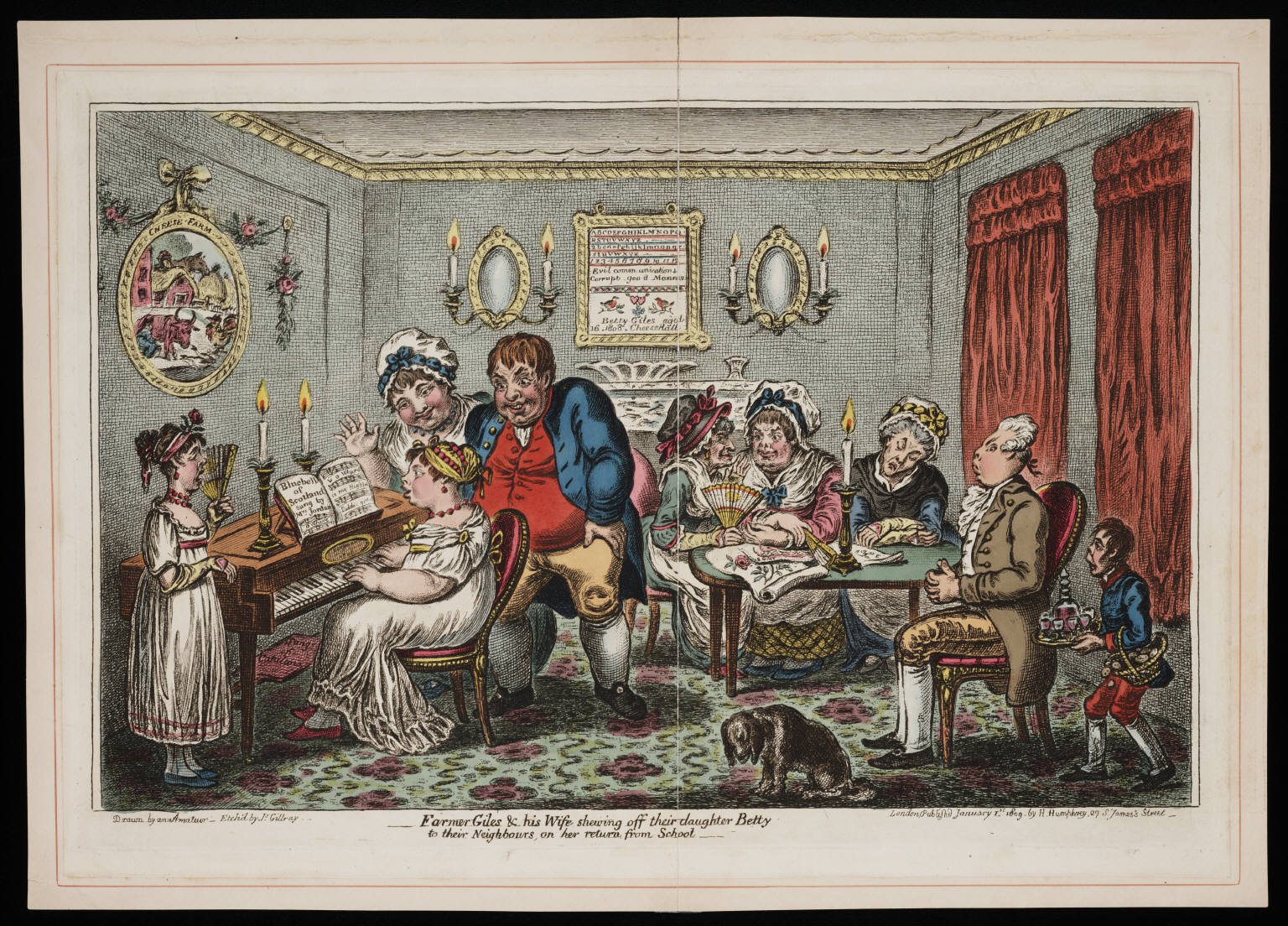 Gillray, James, 1756-1815, Farmer Giles & his wife shewing off their daughter Betty to their neighbours on her return from school drawn by an amateur ; etch’d by Js. Gillray. Courtesy of Lewis Walpole Library.

Thomas Rowlandson’s watercolour sketch of Dr. Syntax lecturing the pupils of a boarding school for young ladies, overseen by a demure mistress, portrays an ideal of compliant female innocence. They sit in rapt attention, hanging on ‘the wisdom of his [Dr. Syntax’s] tongue.’ Rowlandson’s illustrations accompany a text by William Coombe[ref]The Second Tour of Doctor Syntax: In Search of Consolation, a Poem.[/ref] in which he describes the girls:

Some were rosebuds of the day,
Some did their op’ning leaves display 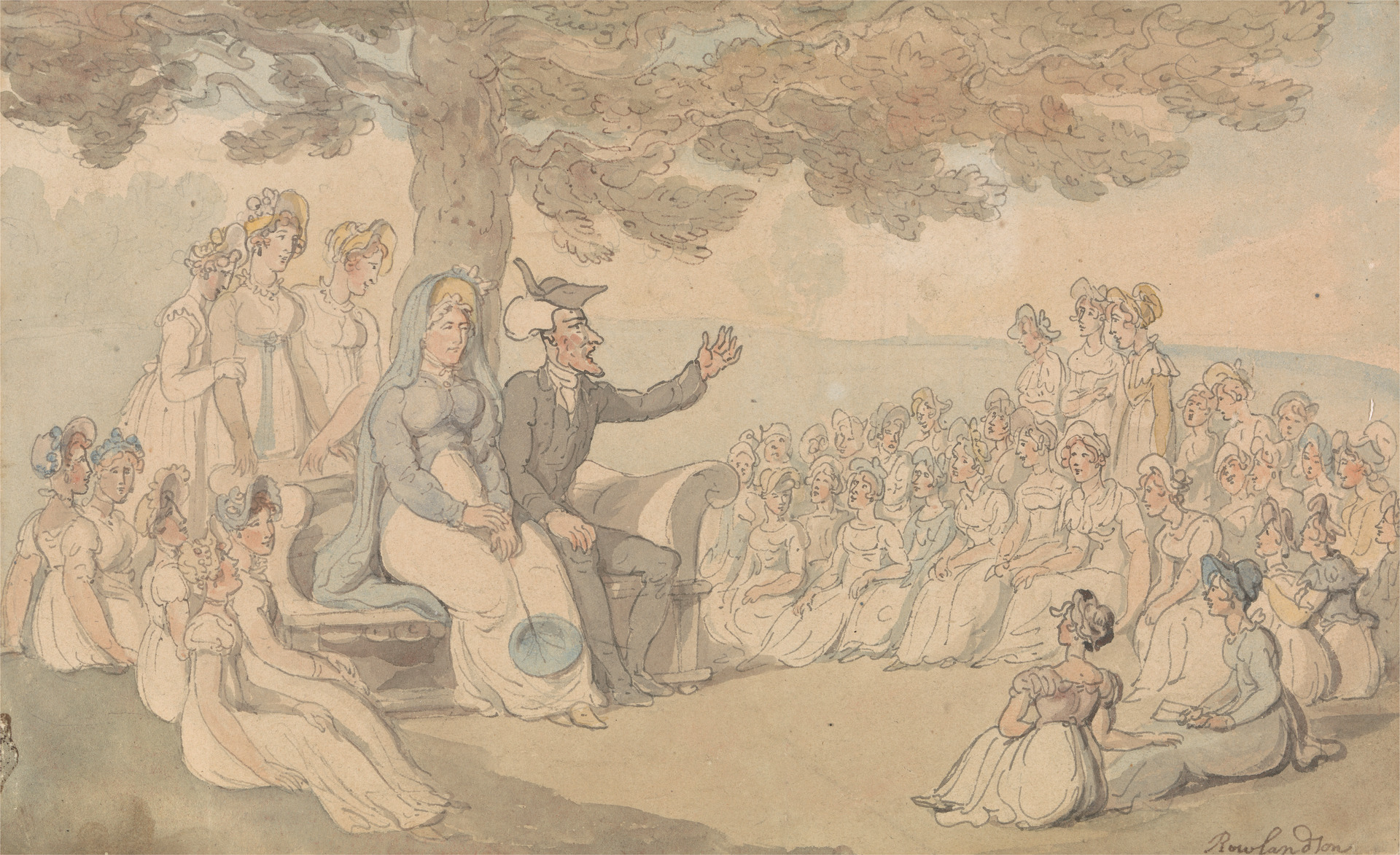 Thomas Rowlandson was rather more concerned with the ‘op’ning leaves’ in his earlier print of a nubile (and probably naive) young woman eloping from a boarding school to join her soldier lover, who upskirts her leeringly while she stands on his shoulders. A servant loads her trunk into the coach, symbolising the transfer of all her worldly, not to mention her bodily, goods to her husband. 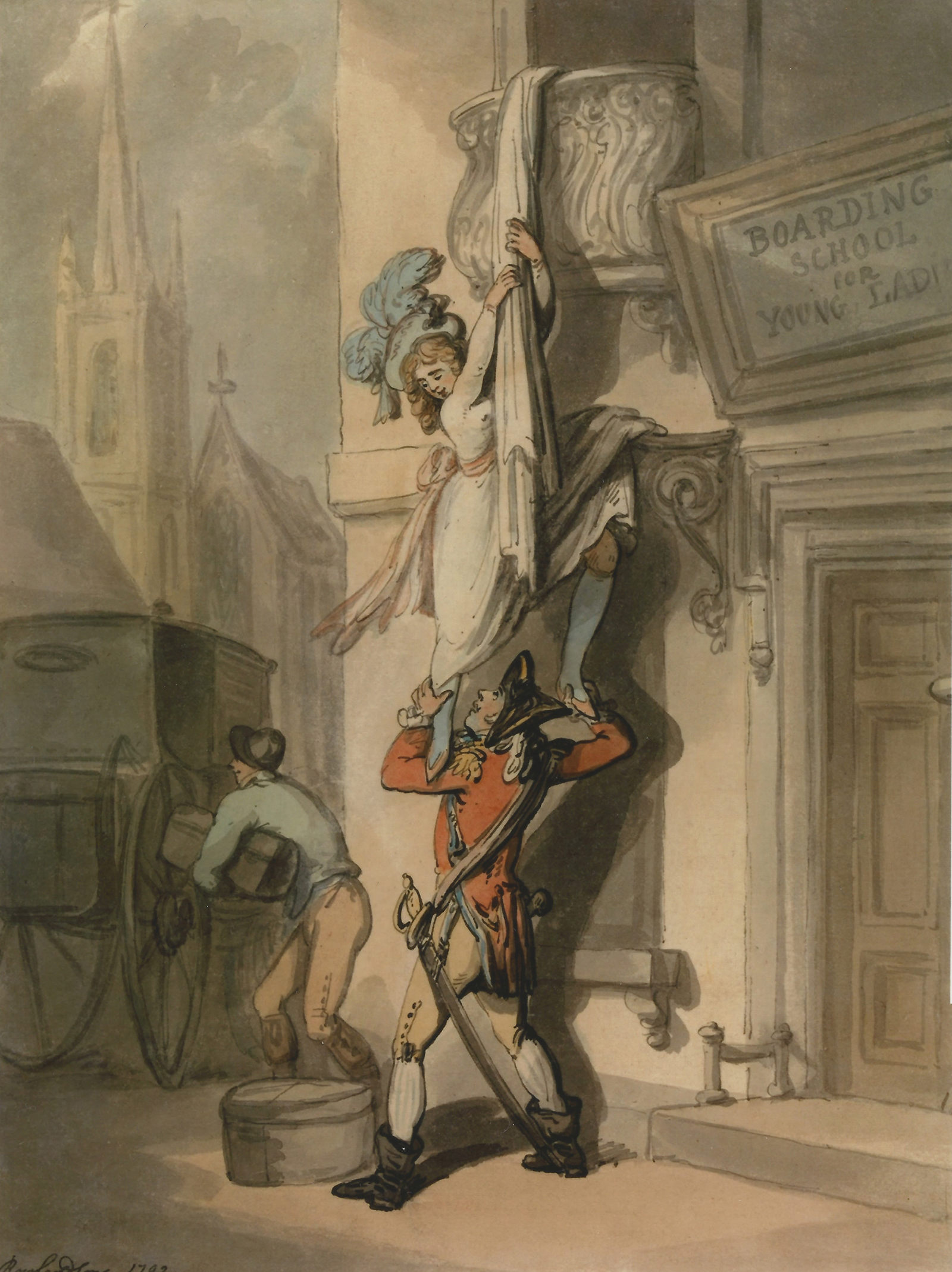