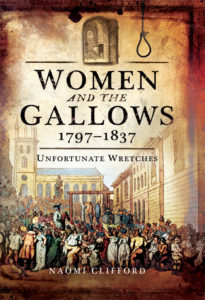 Naomi Clifford’s accomplished account of the fate of 131 women sentenced to death by public execution between 1797 and 1837 is a grim, tragic and compulsive read. We enter the seamy back rooms of regency Soho where forgers lurked, the lives of con-women exploiting the superstitions of country folk and public executions that sated the blood-rush of a pagan past, occasionally resulting in the crushing to death of the spectators.

The writer describes with skilled brevity the story of 20 of these women, dividing the book in to two parts: crimes against a person and crimes against property. The result is a devastating slice of women’s history told without sentimentality and by the chilling facts alone. And the facts are that the majority of these women were pushed in to either murder, fraud or arson through desperation, madness or manipulation from a male accomplice – that desperation arguably encouraged by living under laws firmly biased towards the male advantage.

1797 was a bloody time to live, just 3 years after the reign of terror in revolutionary France and the most remembered public execution of a woman, Marie Antoinette. The book highlights the way in which women were treated as the property of their husband – who was seen in the eyes of the law as a ‘petty’ king of his household, ruling over his property which included his house, land, children, wife and servants. If you were found guilty of the murder of such a ruler you were charged with ‘petty treason’. For women, the punishment was different from murder: you would be dragged by a horse or sledge through the streets to be finally burnt at the stake. In 1793 the burning was abolished, but the dragging towards your place of execution continued until 1828.

Due to the basic forms of forensic research, mistakes were inevitable. In 1815, 21-year-old Eliza Fenning was publicly hung for the attempted murder of her employers with arsenic poisoning. The evidence was sketchy to say the least and efforts for a reprieve, [these were often given] failed. Employers had an inbuilt suspicion towards their servants, bordering on paranoia, and they were the first to be blamed of any wrong doing that took place. After Eliza’s execution, and her innocence became more apparent, public anger rose. This disapproval forced the establishment to act with more care over any future destruction of young women in their prime.

The most heart-breaking accounts are those stories of young women, often teenagers, hung for the murder of their illegitimate babies. We are told that 35 of the 91 women hung for murder in this period were accused of infanticide. Because of the prevailing moral climate, the law often waived the death sentence, aware of the impossible circumstances that surrounded unmarried mothers. One such mother, servant Mary Morgan, had no such luck and was used as an example to others. It was expected that the judge would take pity – instead Judge Hardinge, aptly named, ordered her execution. His attitude to her was deeply sadistic. It is recorded that he described her in admirable terms: ‘her carriage was respectful…and she was born with every disposition to virtue’. Hardinge was then later eulogized on her headstone as a ‘benevolent judge’! Thankfully, local opinion differed and they erected a stone inferring that the 17-year-old had been cruelly mistreated.

This book is an important record, bringing to the surface the injustices of female victims killed by a world with little compassion. It is also an invaluable source for historical fiction writers. Naomi Clifford has given these voiceless forgotten victims a place in history, beginning with the Bank Restriction Act and ending with the ascension of Victoria. This period also brought about the end of public executions and a transformation in our capital punishment laws. It is easy though to be complacent – in exposing the legal injustices to women in the past we can be reminded of those in the present. Worldwide legal injustices against women still rage – and in our own country the present situation at Yarls Wood detention centre is unacceptable. A brilliantly researched document for our times.

Beatrice Parvin, author of Captain Swing and the Blacksmith

READ ABOUT THE BOOK