In late 1811 the public was severely shaken by a set of astonishingly brutal murders in London. In December, during the space of 12 days, two families – including a three-month-old baby — were slaughtered in Ratcliffe Highway and New Gravel Lane in the East End. The local population was terrified; they barricaded themselves in their homes and sat waiting for the worst armed with guns and cudgels1.

A suspect, John Williams, was soon identified and arrested, but to the frustration of all, on 28 December, while awaiting trial, he managed to hang himself with his handkerchief. His body was then paraded through the streets, a stake driven through the heart, and buried in unconsecrated ground along with the murder implements. It was a truly grisly event, and it was reported on in newspapers throughout the country.

With this traumatic backdrop, the story of the abduction of little Thomas Dellow must have come as light relief. Here was a bad story with a good ending! 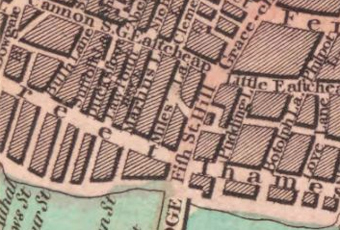 On 18 November, three-year-old Thomas Dellow was stolen from his parents’ green-grocers shop St. Martins Lane, Upper Thames Street. A kindly lady had come in and bought some apples, one of which she gave to him. She asked the boy’s sister to direct her to a pastry shop where she would buy a treat for them. Their mother, being distracted with customers, did not object. At the pastry shop the woman promptly took up the boy and disappeared with him.

A suspect was soon identified. Mrs. Russell, a respectable woman, despite her protestations of innocence, was hauled up in front of the Magistrate and sent to the Old Bailey for trial.

The populace, ever ready to decide without proper evidence, took up a most violent prejudice against her, not only assuming that she was the guilty person, but would probably, but for the humane interference of the city chief magistrate, have inflicted upon her the most severe and summary punishment. —The New Annual Register, 30 December 1811

Mrs. Russell was exonerated when her alibi was proved but her reputation was ruined.

The authorities in London organised an extensive publicity drive, sending posters and hand-bills across the country, in which Thomas’s appearance was minutely described. A reward of 100 guineas (£105) was offered.

In Alverstoke, near Gosport, Hampshire, a Mrs. Fallick became suspicious of her neighbour, Harriet Magnes (or Magnay), a sailor’s wife. Harriet seemed to have a child but Mrs. Fallick did not remember her ever having been pregnant or caring for a baby. The child, a little boy, seemed to bear a resemblance to the missing child being advertised. She took her suspicions to the local magistrate, who called in Mr. and Mrs. Magnes.

Harriet Magnes soon confessed that the boy was indeed Thomas Dellow. Her reasons were unusual to say the least. She had not attempted sell the child, nor does she appear to have been overcome with maternal yearnings.

Instead, she had lied to her husband that she had had a child while he was at sea. Kidnapping one was the only way to extricate herself from her tangled web:

Magnes, her husband, who was a gunner on board one of his Majesty’s ships, and had saved a considerable sum of money for a man in his station of life, was extremely partial to children, and had often expressed his most anxious wish to have a little darling, as he used to term it. His wife, not less anxious to gratify him in this respect, wrote to him while at sea, that she was in the family-way. The gunner, highly delighted that he had obtained his desired object, sent home the earnings of many a cruise, amounting to 300l. [£300] with a particular charge that the infant should be well rigged, and want for nothing: if a boy, so much the better.

The next letter from his hopeful wife, announced the happy tidings, that his first-born was a son; and that she would name him Richard, after his father. The husband expressed joy at the news, and counted the tedious hours until he should be permitted to come home to his wife and child.

At home he at length arrived, but at an unfortunate time, when the dear Richard was out at nurse, at a considerable distance; change of air being necessary to the easy cutting of his teeth. Magnes’ time being short he left home with a heavy heart, without being able to see his offspring; but he was assured that on his next trip to Gosport he should have the felicity he had so often pined for, of clasping his darling to his bosom. It was not until November last that he was at liberty to revisit home, when he had again the mortification to find that his son, whom he expected to see a fine boy of 3 years old, had not yet cut his teeth, or that he was from home on some other pretence. Magnes, however, was not be pacified thus: he would go and see his son, or his son should come to him. Mrs. Magnes, finding him determined, thought the latter much the best way; and accordingly set off to fetch the boy. —The Times, 2 January 1812

It might surprise you that Harriet was charged only with a misdemeanour.

A friend of the innocent Mrs. Russell’s was at the preliminary hearing in front of the Lord Mayor and protested loudly at her treatment (she was clearly continuing to suffer damage to her reputation), but the Lord Mayor, while regretting the injury and inconvenience she had suffered, said there was nothing he could do.

At her trial at Winchester in March Harriet Magnes was also charged with having two husbands, but found non-guilty through insufficient evidence. The case rested on identification, which could not be proved. She was also let off the charges relating to Thomas Dellow.

She was acquitted by the direction of Judge Graham, on the ground that the assault, if any, was committed in London; and he could not consider any thing done subsequently as amounting to an assault. —She was again tried, on the 7th, for falsely imprisoning Thomas Dellow, detaining him, and cutting off his hair, without the consent of his parents: the Jury found her not guilty; evidence having been given, that her husband, Richard Magnes, was present during the time the little boy was detained by her in Alverstoke. —No evidence having been produced in the course of these trials to prove whether Mrs. Magnes was the person who actually took Thomas Dellow from St. Martin’s-lane, Upper Thames-street, or whether she received him from some other person, this affair may perhaps remain a mystery for years to come… –The Gentleman’s Magazine, Volume 111 (January-June 1812)

After this the players in the story fade from view. But the case had major repercussions. First, a book for children:

The Adventures of the Celebrated Little Thomas Dellow: Who was Stolen from His Parents on the 18th of November, 1811, and Restored to Them on the 3d of January, 1812, Illustrated by William Darton.

and a strengthening of the law:

In the year 1808, Mr. Alderman Combe brought a Bill into the House of Commons, to prevent CHILD STEALING, which passed that House, but, from some accidental cause, did not pass the House of Lords. At the time the distressing event happened of the loss of Thomas Dellow (aged three years), who was stolen from London in November 1811, and discovered at Gosport, the want of a law by which persons, guilty of Child Stealing could be indicted in a direct manner, was noticed, and with a view to the passing of Act for that purpose, several cases of this offence were printed, and distributed to Members of Parliament and others; and, on the 17th of May last, Mr. William Smith (member for Norwich) brought in a Bill against the crime; which Bill, with some amendments, was finally passed July 18, 1814. –The Gentleman’s Magazine, Vol 84, Part 2 (July–December 1814

And what happened to little Thomas?

A Thomas Dellow, born in 1808, died in 1886 in Poplar, East London. The 1871 census shows him as an unmarried basket maker boarding in Shadwell.

Mrs. Fallick had to sue for her reward for correctly identifying Thomas Dellow. Mr. Barber, the keeper of the House of Correction in Gosport, had claimed it for himself. She was awarded £70.

Aside: Harriott Voice was recorded as marrying Richard Magnass on 24 July 1808 at Holy Trinity, Gosport. In addition, a Harriott Voice married Thomas Furlong on 6 August 1808 at Alverstoke. Whether these two Harriotts were one and the same cannot now be proved but perhaps she did marry twice. I can find no further evidence of Harriet/Harriott.

Newspaper sources for this story