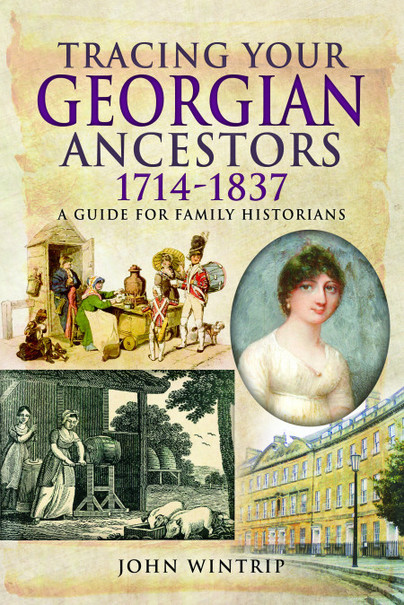 John Wintrip’s well-ordered book introduces the range of resources available to the family historian researching the Long 18th Century. It is written in a simple, straightforward style but is never less than interesting and Wintrip illustrates his sections with real-life examples. Compared with the Victorian era, the Georgian can present difficulties to the researcher: incomplete archives, lack of details, but Wintrip guides the reader to alternative ways to glean genealogical data.

The book is a companion work to Wintrip’s Tracing Your Pre-Victorian Ancestors (also by Wintrip and published by Pen and Sword), which covers research methods. The resources outlined here are given concise historical context so in effect the book is an excellent potted history of the period.

There are chapters on Government, Parishes, Higher Ecclesiastical Jurisdictions, Religious Dissent, Education and Employment, War and Peace, Social Status and Prosperity, Poverty, Land and Property, Law and Order, Migration and Research Methods, plus a useful glossary and bibliography.

Although aimed at the family historian there is plenty for the more general historian. I learned plenty: the male naming conventions in families (and why it can be so confusing), why Mr Bennet and Mr Collins have different surnames despite being descending through the male line from the same ancestor, the way the swap over from the Julian to the Gregorian calendar worked are just a few examples. I will certainly be referring to this book when stuck on how to find some of the scads of people who crop up in my research for this blog or my book projects.