The journalists had fun with this story of six prisoners destined for Botany Bay who decided they would rather take their chances by escaping. There are great details, such as the cupboard concealing them as they dug out the hole and their dilemma when they discovered that they were stuck on the roof without a means of getting down (they used blankets knotted together). 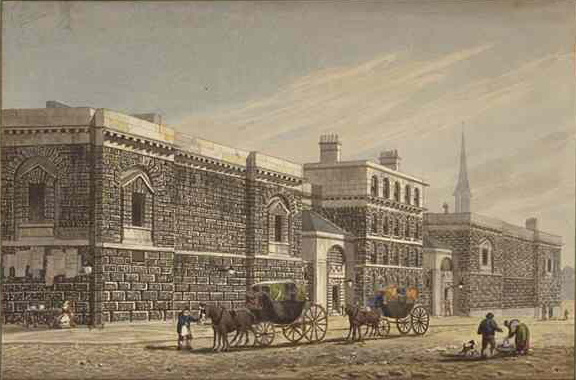 Maurice (or Morris) Healey, the only prisoner to be recaptured on the day, was not wearing chains (another had filed his off but the rest were “heavily ironed”). Seems like rotten luck.

He was obviously naive or wanted to appear so, telling the magistrate, Mr. Newman, that escaping “did not appear so great a crime”. The authorities did not agree, of course, as shown by the size of the prize they offered: £20 plus £5 for each escapee.

On Sunday evening, at six o’clock, the following prisoners, who had been capitally convicted,but whose sentence had been commuted to transportation for life, broke out of Newgate. The offences of which they were found guilty are annexed to their names:— James Hickey, Thomas Culliver & Maurice Healey, for burglary, Solomon Bowerman, John Hardy, and John Harrison, for horse-stealing —Healey was prevented from joining his companions by the courage of an old woman who resided on the premises into which they made their way from the place of confinement. He was shut into a small yard, from which there was no possibility of making an immediate escape; and of course was obliged to remain there until the alarm was given, and the keepers and officers, who assembled in great numbers, after there had been a great necessity for them, arrived. The following is the substance of the examination of Healey, who was conducted to Mr. Newman’s house, where the Lord Mayor had already arrived:— He at first denied that he knew any thing of a premeditated plan to escape from prison but when he was assured of his danger in case of his refusal to declare all he knew, he became more communicative. He then said – but begged to be understood as a man, not only innocent of prison breaking, but of the crime for which he was confined in that prison – that the five men whom he followed had been working for their escape five days: that the horror of transportation for life made them desperate enough to attempt any thing, and that it was by mere accident he became acquainted with their intention, His first impulse was to prevent the crime by alarming the keeper, but when he reflected, it did not appear so great a crime. Besides, they had told him they would just breathe the fresh air and return. In the room where they were all confined there was a cupboard large enough to contain a man without cramping him. This cupboard was in the direction of Warwick-square , and the prisoners in five days accomplished the task of cutting through the wall, which consisted of bricks and timber of prodigious thickness, by which a very extensive area presented itself. They left a thin partition between them and the open air, until it was dusk on Sunday evening, when they pulled it inside, and formed a hole large enough to admit them through it. Healey was not in irons, because his legs were unfit either for their weight or pressure; the others were; but Solomon Bowerman, who had a file, freed himself from his while the other four were muffling their bolts. Culliver was the first at the hole; he looked out to see whether the watchman on the roof of Newgate were attentive to their duty: no watchman was to be seen. All the prisoners got out upon the top of the prison; but upon looking round they saw nothing but death, and upon looking through the hole they saw nothing but transportation. The walls were so high, and the enterprise appeared so fearful in every respect, that they would have repented, but that Bowerman put them in heart, saying, he’d bring up the rear. In all their deliberations they had not once hit upon the necessity of having a rope, or a substitute for a rope. Bowerman went through the hole, and returned, dragging after him the rugs with which they used to cover themselves, Those they tore to huge pieces, tied together, and suspended from the ramparts. They descended without hurt into the yard of a private house, and having listened at the back door for a moment, Bowerman tried the latch, which admitted him; but the moment he entered the kitchen an old woman stood full in his view. It was too late for ceremony; he dashed by her, and was followed with great speed by all his friends, except Healey, who loitered, and was shut into the yard. Healey declared, that so anxious was he to return, that he attempted to mount by the means he had used in descending. The five other men have not yet been apprehended. Mr. Newman offered the sum of 5l. for the apprehension of each of them, in addition to the reward from government of 20l. The Lord Mayor was at dinner at the Mansion-house on Tuesday, and declared that he would so regulate the police that 200 officers should be ready at less than ten minutes’ warning to attend the chief magistrate upon any emergency; and that if the disturbance which prevailed had been a riot instead of the result of an escape, the consequences might have been most alarming. 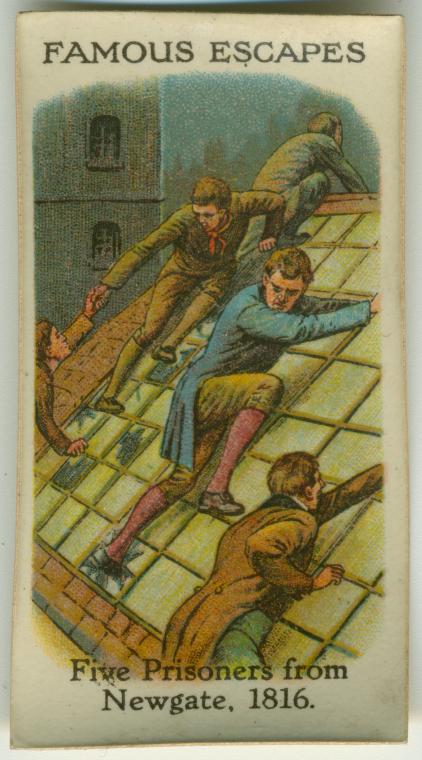 An additional report published with the above has the men going through the roof of their cell and adds that they descended into the space between the Old Bailey and the Physicians College, and then climbing into the yards of two houses and entering the print works for the County Chronicle. Then, as they clambered over a roof, the skylight gave way and they were discovered by a man who ran upstairs to give the alarm while the men got into a yard belonging to a Mr. Letterman. This was where they encountered the old woman and where Healey was captured. He was taken to Giltspur Street Compter and from there to the prison hulks. The remaining men were reported to have entered a cottage in Barnet occupied by a lone woman. There they managed to take off their irons and continued on their way.

Maurice Healey was transported on board the Morley and arrived in Australia in April 1817.

Solomon Bowerman was eventually caught (no details) and transported. He had grown up in a large and poverty-stricken family in Charlbury, Oxfordshire. One brother, James, was transported in July 1816 for killing a fallow deer in Wychwood Forest and another, George, was sentenced to hang for burglary but also transported. All three were hanged in Australia on 23 December 1820 for highway robbery. 1