When I was a child in the late 1960s, my mother told me that the man upstairs had forbidden his wife to read books. Since I spent nearly every waking moment with my nose in a book, I was both incredulous and mystified. How did this poor woman put up with such a thing? Did she defy her husband?

Alas, women’s reading is frequently of interest to men, and not necessarily in a good way. In individual households they might be forbidden to read specific books or pages of the newspapers. Female education was often dominated by domestic skills and a bit of foreign language – enough to ensure women could converse intelligently with their husbands but not to get above themselves in areas that should not concern them. But women have always managed to circumvent the restrictions imposed by men, and reading is no different.

It’s worth bearing in mind that of these five depictions of women reading three are known to be by men and two are probably by men.

We’ll start proceedings with this stipple engraving by an unknown artist, in which a rather earnest-looking young woman seated next to a writing table and engrossed in her book fails to notice that Cupid hovers nearby and is about to brush the back of her head with the feather of his arrow. Possibly she is reading the type of racy romance that was thought to overstimulate the emotions of females. The cherub looks knowingly out of the picture at us. 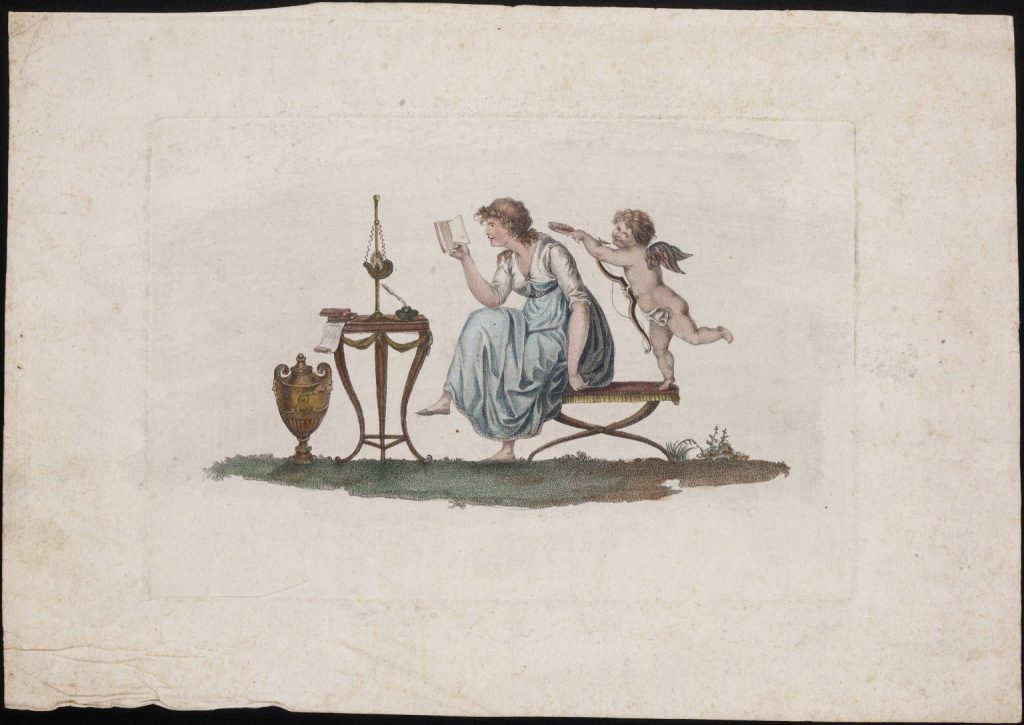 The next, by George Morland (1763–1804), is an intimate portrait of his wife Anne (1765–1804) who is dressed informally and seated on a sofa in her bedroom or boudoir. She holds a small book but is not actively reading. Rather, her gaze is cast sideways, and although the hint of a smile plays on her lips she has a weary, long-suffering expression, possibly because at the time this was painted she and Morland had separated, their marriage foundering under the stress of his drinking and profligate spending. Morland died in a sponging house nine years later, followed within four days by Anne, who had suffered chronic ill health for years as the result of a disastrous birth. 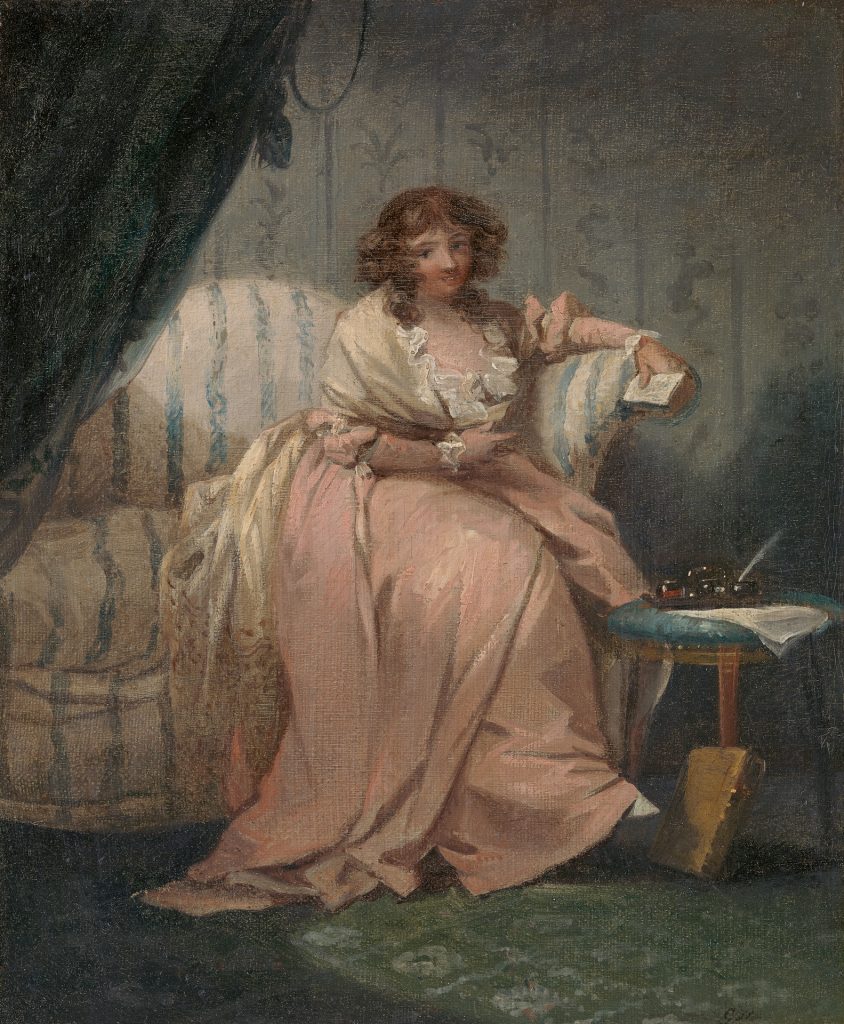 Third is this Thomas Gainsborough. The young woman, shown in a landscape full of classical structures, is not actively reading but looks out of the frame questioningly. Perhaps she is perusing a female conduct manual. The sitter is unidentified but is similar in appearance to the woman in Portrait of a Woman, Possibly of the Lloyd Family. 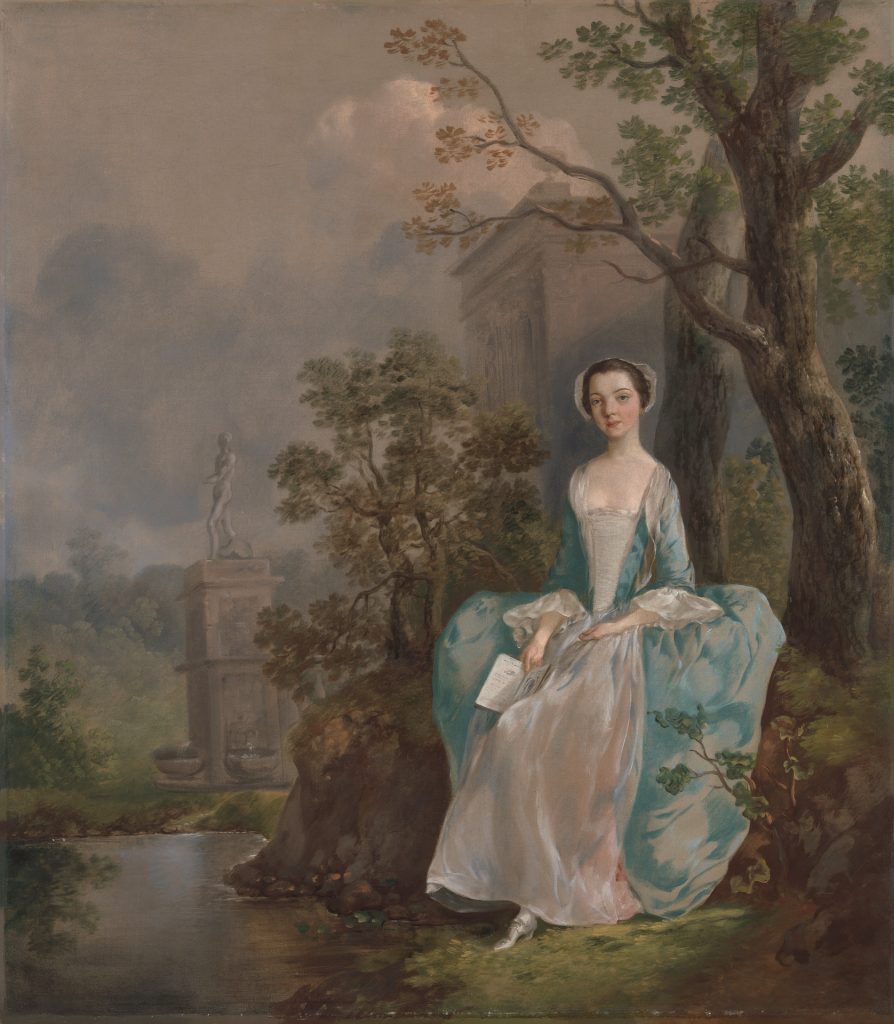 Thomas Gainsborough (1750). Portrait of a Woman. (Girl with a Book Seated in a Park). Yale Center for British Art, Paul Mellon Collection.

By way of contrast the fourth image is a print by the satirical cartoonist James Gillray in which three women sit at a table while a fourth reads out loud from the Gothic novel The Monk. The print is inscribed “This attempt to describe the effects of the sublime & wonderful is dedicated to M.G. Lewis Esqr. M.P”, Lewis (1775–1818) being Matthew Gregory Lewis, the author who wrote and published the work in about 1795 when he was barely 20. Six years later, the novel, which went through several editions, came in for some heavy criticism from Scots Magazine1 The Monk, usually thought of as a “male gothic” novel, was heavily influenced by Ann Radcliffe’s The Mysteries of Udolpho, which Jane Austen satirised in Northanger Abbey. 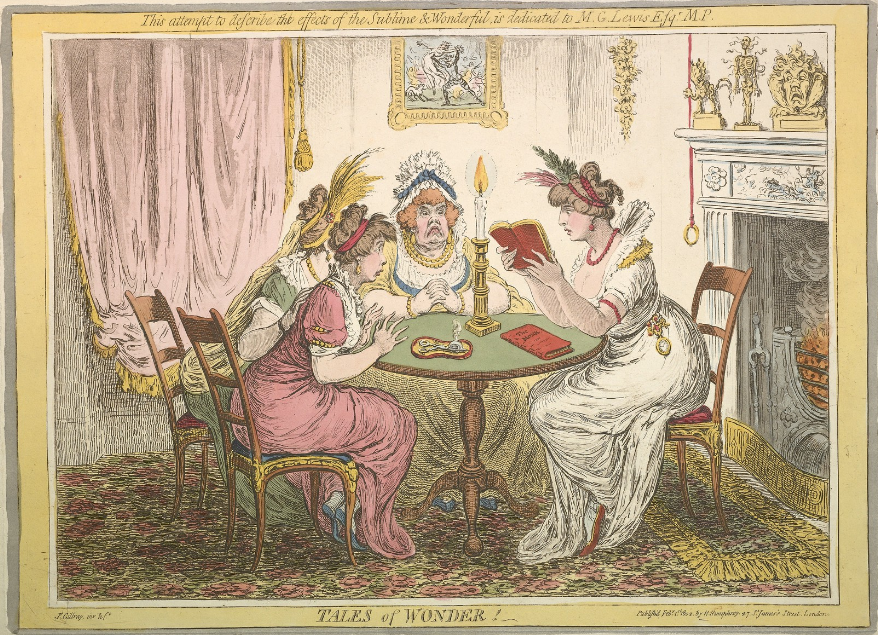 Finally, in this 1778 print entitled The Studious Beauty, we can be confident the fashionable young lady seated by a table is not reading a tome of sermons or  a manual on how to improve her conduct. Everything about her pose and appearance – the legs clearly delineated beneath her skirt, her hand lying suggestively in her lap – points to her being immersed in a racy romance or a sexy gothic novel. 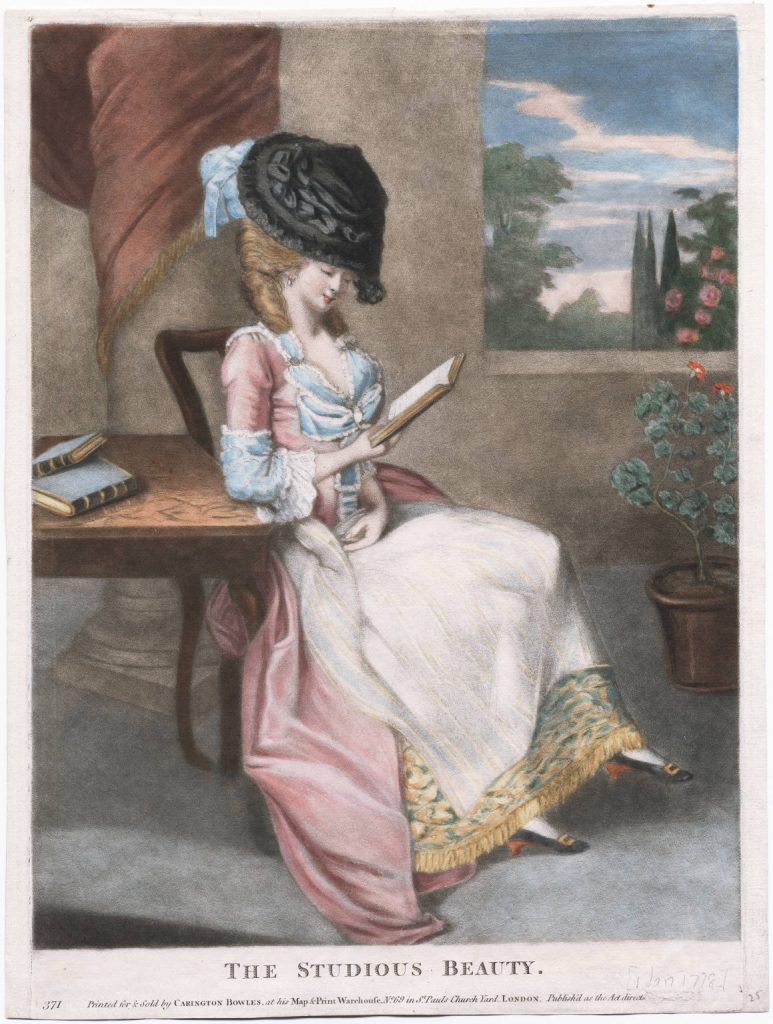