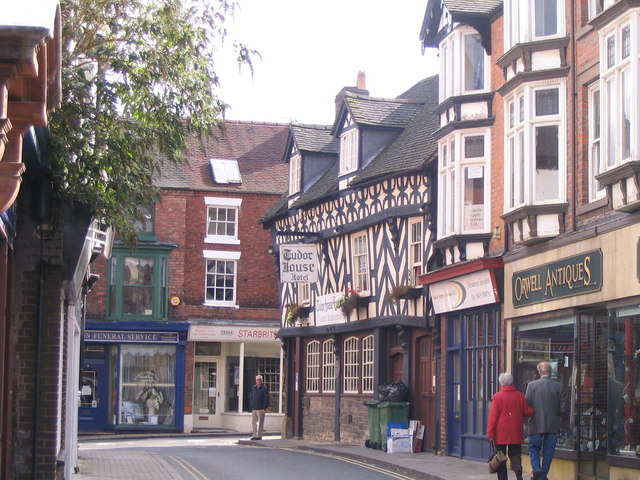 Market Drayton, Shropshire: At the corner of Cheshire Street and Shropshire Street. © Copyright M J Richardson and licensed for reuse under this Creative Commons Licence

This story is almost Jacobean in its twisted loyalties, blackmails and betrayals, so in order not to confuse you, we’re going to start with a dramatis personae:

Looks lovely, Market Drayton. Difficult to believe there was a time when it was overrun with sheep-stealing gangs, ‘a dreadfully depraved set of people’.1 The gang was 40 or 50 strong and many of the members were closely connected by blood and marriage. One of them, Thomas Ellson, was arrested in at Easter 1827 for stealing potatoes and locked up in Stafford gaol. He was later transferred to Shrewsbury gaol and charged with stealing sheep, a hanging offence. The chief witness against him was James Harrison, another member of the gang.

To save Ellson from the gallows, his friends and family decided to kill Harrison. Ann Harris, Ellson’s mother, had a conversation with John Cox, his father-in-law: ‘Damn him,’ said Cox and promised to throw Harrison into a coal pit, but Ann preferred to poison him. Cox went to an apothecary’s shop to buy arsenic but did not have a witness, which was standard practice to deter poisoners, and was refused.

Ann then tried a different approach: she asked her sister-in-law Alice Lewis to ask her husband, who was about to travel to Newcastle, to get some arsenic.

‘What do you want it for?’ asked Alice.

‘I want it to poison that damned scoundrel James Harrison.’

The woman told her this was a wicked thing, and in the end Ann promised not to do it.

She didn’t. However, she did embark on a third plan, which was, with John Cox, to pay Cox’s two sons John and Robert and a young man called Joseph Pugh to kill Harrison. They each gave the young men 50 shillings (£2.50) for their trouble.

Harrison lodged in Joseph Pugh’s parents’ house. In order to entice him out to a prearranged spot, Pugh suggested that they go out to steal bacon. Pugh took him down Wiper Lane to the town-field by the penfold, and on to Dale’s barn, where the bacon was kept, but then said the timing wasn’t right and that he should go and lay down by Cartwright’s stack and wait for the moment. When he got there the Cox brothers jumped out from their hiding place. Pugh caught him by the throat while John Cox grabbed his legs. John put a rope around his neck and strangled him. Robert Cox, meanwhile, was digging a grave in the next door field. Harrison’s last words were, ‘Oh, Lord! Spare my life and I’ll never hurt Shooler [Thomas Ellson’s nickname].’ 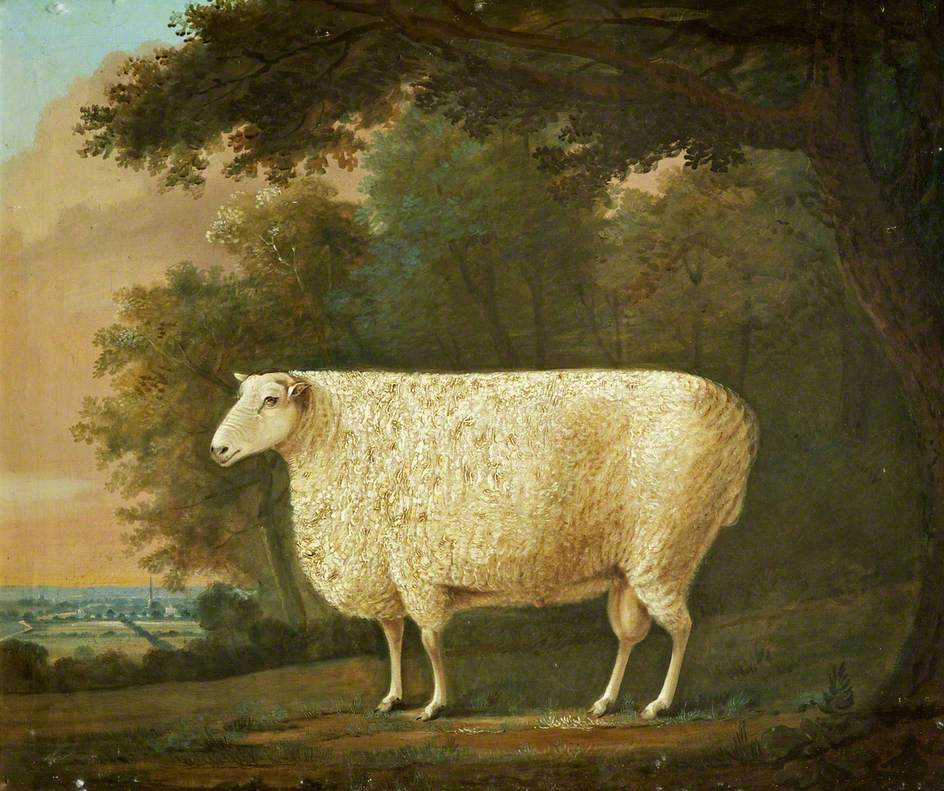 When Harrison failed to appear at Ellson’s trial it was generally thought that he had taken fright at giving evidence and left the neighbourhood. Ellson, of course, got off the charge. After he emerged from Shrewsbury gaol he went to the pub with Old Cox and his sons. Robert told him, ‘If it had not been for me and Joe Pugh, you would not have been here now.’

That night Ellson went back to his mother’s house. At suppertime, Robert Cox turned up and said to Ann Harris, ‘Damn your eyes, if you don’t give me some more money, I will fetch him [Harrison], and rear him up against thy door!’ He came back the following morning and Ann Harris gave him 2 shillings and told him ‘never to come bothering me again.’

After that, everything seemed to calm down – until June the following year, when Ellson was once again arrested, this time for stealing fowls. While he was in the lock-up, Old Cox came to see him. If you say nothing about the murder, I’ll hire you a lawyer and counsel, he said, but to save himself from punishment (not execution in this case, seven years transportation) Ellson decided to tell the authorities about what had happened to Harrison.

On 26 June, acting on information provided by Joseph Pugh after his arrest (he confessed immediately), Harrison’s body was located in Hocknell’s Field, and identified at Drayton poorhouse by George Pugh, in whose house Harrison had lodged. Joseph Pugh gave evidence at the inquest, saying that he and John Cox had killed Harrison and that Ann Harris had given them 50 shillings for the job. During the murder, he said, Robert Harris ‘stood looking on’; he did not take part in the killing. 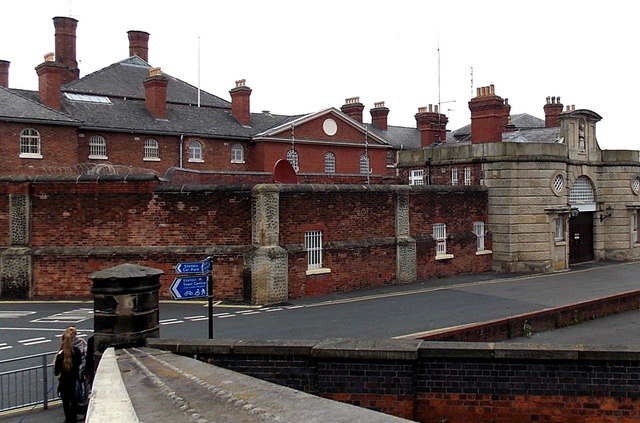 Former HM Prison Shrewsbury. Viewed across the road named The Dana at the end of May 2014. The prison closed in March 2013. The building, constructed during 1787-1793, was Grade II listed in 1969 (as Shropshire County Gaol). © Copyright Jaggery and licensed for reuse under this Creative Commons Licence.

At the trial of Ann Harris, John Cox the elder, John Cox the younger, Robert Cox and Joseph Pugh, George Pugh described the night Harrison went missing. He said that on 14 July 1827, he had heard a whistle outside the house. Ann Pugh, his wife, told the court she had looked out of window and seen John Cox the younger. When Harrison did not appear in the morning, they asked their son where he was. He said he didn’t know.

Thomas Ellson was brought out of gaol to give evidence. He was well aware that by giving his account to the court he was placing his own mother’s life on the line, and admitted that he had known about the murder for over a year.

Ann Harris’s confession was read to the court. She admitted giving money to Robert Cox for the murder. Old Cox came up with a different story; he claimed that he had taken Harrison to Gloucester and enlisted him in the army. Robert Cox said that his brother John had nothing to do with it and that Pugh had committed the murder while he himself sat under a hedge. Elizabeth Ellson, the wife of Thomas Ellson and daughter of Old Cox and sister of John and Robert Cox, said that along with her mother-in-law Ann Harris and Joseph Pugh she had gone to visit her husband in Stafford gaol. On the journey, the subject of killing Harrison came up, and Ann Harris had, at that stage, offered Pugh £5 and a coat for doing it.

During the trial Old Cox spoke directly to Judge Gaselee: ‘My Lord Judge, my Lord Judge, I’ll speak, I’ll speak now I will. That there lawyer chap [pointing at his attorney] and that Counsellor there, they have kept my witnesses out of court, and would not call them. They would not, and I have to call them.’ The witnesses were called but they did not help his case.

After a brief consultation, the jury found all five guilty. The three young men who had killed Harrison were ordered to be hanged and dissected. Ann Harris and John Cox the elder, being accessories before the fact, were to be hanged only.

Robert Cox had assumed that because he merely dug the grave he would be given a lesser sentence and took some time to be reconciled to his fate. At nine o’clock on the morning 4 August, notice of a reprieve for him arrived. John Cox and Joseph Pugh went calmly to the scaffold,

Old Cox was reprieved on 10 August, which raised the hopes of Ann Harris. When it was clear that she would not be respited, she fell into ‘a deplorable situation’, not helped by the bread and water diet, which was all that condemned prisoners were permitted while they awaited their fate. Normally, condemned felons were executed within a two days of their sentence but because of the possibility of respites execution was delayed.

Before her death, her husband and daughter visited, but she requested them to stay away as she needed to prepare herself without distraction. Even so, she was not contrite; she said that her commission of the killers ‘had saved the life of her dear lad’. Even after he had betrayed her, her commitment to him was absolute. Newspaper reports claimed that she had ‘never heard of Jesus Christ till she came to the gaol, and the plainest doctrine of Christianity was to her unknown till she came within its walls.’

Ann Harris, aged 50, was executed at Shrewsbury shortly after 12 noon on 16 August in front of a crowd of 5,000, the first woman to be hanged in the county for 25 years. On the scaffold, her legs being bound together, she needed the help of Mrs Kitson, the matron of the gaol, and another woman, to reach the rope. After the drop, she ‘struggled violently for a few minutes’ and an hour later her body was cut down. She was buried in St Mary’s churchyard.

As was usual, newspaper reporters made judgments on the accused on the basis of their physical appearance. Joseph Pugh was said to have ‘a Gipsy cast of feature’, with ‘a look of savage fierceness when his attention is excited’ (his parents, who gave evidence, were not described but we can assume one of them had similar dark looks); the Cox brothers were ‘ill-looking’; their father had a face showing ‘deep traces of revenge, malice, and low cunning’. Ann Harris was ‘remarkably keen-looking, with a most malignant pair of sparkling black eyes’.

Thomas Ellson escaped the charges for stealing fowl because he had given evidence in the murder trial, but seven years later he was back in court for larceny and sentenced to 14 years transportation to Australia. After eight years and with no major infractions to his name, he was granted a pardon, and his whereabouts after that are unknown.

Ellson may have been the boy soldier Thomas Ellson from Prestrip 2 recruited at Shrewsbury by Sergeant Harris (his stepfather?) and named on the Canadian Regimental Registers of Service for the 58th Foot Soldiers and lying about his age (given as 16 but probably 13).3

Harrison’s body probably would have remained undiscovered in the field but for the boasting of Ann Harris and the Coxes. Ann herself probably suffered death, while her co-conspirator Old Cox did not because society could not tolerate women who acted in what was seen as a ‘masculine’ way.