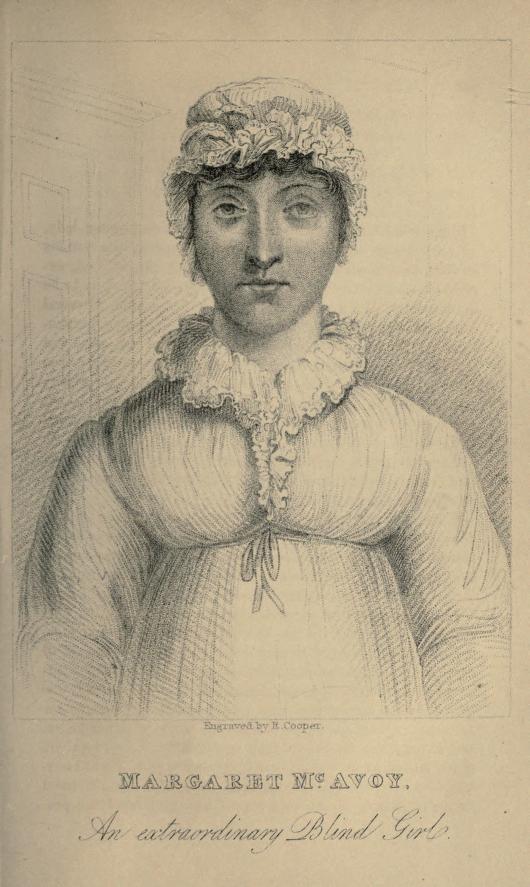 In September 1816, Thomas Renwick, Physician to the Liverpool Infirmary, called on a respectable family living in St Paul’s Square, Liverpool. He was accompanied by Egerton Smith, founder of The Liverpool Mercury, who was eager to meet their daughter, Margaret McAvoy, about whom Renwick was making astonishing claims.

Margaret, aged 16, had the previous year suffered an episode of hydrocephalus or water on the brain, which had rendered her paralysed down one side. She was weak and sickly, and her illness had robbed her of her sight, but the crisis had left her with extraordinary powers of perception. Despite being unable to see, she could distinguish the colours and read books, by merely touching the objects with her fingers. Smith wrote:

What I had seen at my first interview was so extremely astonishing, and so far surpassed any thing I had ever known or read of the powers ascribed to persons deprived of sight, that I could only account for it on the supposition that she was not blind, and that she had some secret mode of discerning an object, notwithstanding the bandage [over her eyes] through which I myself could not distinguish night from day, when applied to my own eyes.

He described her reading from the book.

She began to trace the words with her finger, and to repeat them correctly. She appeared to recognise a short monosyllable by the simple conduct of one finger, but in ascertaining a long word, she placed the fore-finger of her left hand on the beginning, whilst with that of her right hand she proceeded from the other extremity of the word; and when the two fingers, by having traversed over all the letters, came in contact with each other, she invariably and precisely ascertained the word.

He noticed that when the object under test was hidden behind another (that is, out of view), “she is much embarrassed, and frequently entirely baffled,” but she came up with explanation that there should be “uninterrupted communication between her finger and her breath.”

The family were very polite and accommodating. There was no suggestion that he should make a contribution to their expenses.

Smith made an arrangement to return later that evening, and tested her by asking her to sit in a corner of the room with her back to the very small fire in the grate (the candle having been extinguished). He gave her a book to read out, which she did, “except for one very minute word,” and to describe some coloured lines on a page of smooth writing paper.

On one of Smith’s visits, he brought with him seven stained landscape “Claude Lorraine glasses” (glass plates bound up in a book that have the the effect of abstracting the subject reflected in it from its surroundings, giving them a painterly quality). For this experiment Margaret wore goggles, of the type normally worn by travellers to protect against wind and dust on the road, with green glass fitted into a “bandage” of leather wrapped around the face. These were lined with opaque pasteboard and paper, and Smith stated that “not an aperture was left through which a single ray of light could penetrate.”

Margaret announced the shade of each one accurately, apart from one, which she eventually pronounced deep crimson. It was too dark in the room for Smith and his companions to determine the colour. Just at that point, the sun came out and the plate was revealed to be as Margaret said.

It has been said, and with some plausibility, that this must have been a bold guess on her part; if not, it will puzzle our physiologists to explain how a person reputed to be blind, with an opaque bandage also over her eyes, could declare the colour of a glass,, which persons in full enjoyment of their eye-sight, and without any such obstacles, could not discern by any other light than that of the meridian sun!

Egerton Smith was impressed but he was also sceptical. Ultimately, he was not convinced that trickery had not been used. “I could never divest myself of the impression that the eye was in some way or other concerned in these mysteries.”

Dr. Renwick, on the other hand, had no doubt that Margaret had developed enhanced powers of perception, and he published a pamphlet about her: A Narrative of the Case of Miss Margaret McAvoy,1 in which he argued that, far from being unique, she was not alone in her gifts and gave several other examples where blindness had led to “a superior acuteness in touch, in smell, in taste, or in hearing”. He went into minute detail about Margaret’s medical history:  her symptoms – costiveness convulsions, fever, putrid discharges, muscle contraction, constipation, menstrual regularity, and headaches – and the treatments prescribed for her. She was bled, was administered clysters, and endured blisters applied to her head.

Margaret McAvoy wearing the mask Dr. Renwick developed to test her claims that she could see through her fingers. From Thomas Renwick’s Narrative of the Case of Miss Margeret McAvoy

Despite all this, and through one health crisis after another, she managed to learn how to sew beautifully (she was excellent at threading needles), read pages of the Bible, and entertained the gentility.

Egerton’s Narrative attracted “a great influx of visitors,” including inent medical men, such as Drs. Brandreth and Trail, and Mr Bickersteth, who examined Margaret and gave their opinions. To overcome their doubts, Renwick filled the goggles with cotton or lint, but these pressed on Margaret’s eyeballs and gave her severe pain. They were terminated, which just increased the doctors’ scepticism. Even Renwick had a twinge of doubt – but he soon expunged it. “I did not think I was doing justice to Miss McAvoy’s character, or to my own, by giving up the judgment I had formed, from repeated trials, that she possessed this power.”

Margaret’s health began to deteriorate rapidly. She had convulsions and twitches. Her throat went into spasm and she was unable to breathe. She coughed up green slime. Eventually, just as Renwick had given up hope of saving her, the crisis abated and she began to improve. Her powers were unaffected. One day, because her mother was away from the house, she decided to mix up her medication herself. As the writing on the instructions was very small, “it struck her that she might be able to read it through this glass, and she applied her fingers to the glass, and then read the direction upon the label.”

The medical sceptics returned, for more trials. Dr. Trail put sticking plaster on Margaret’s eyes; when crevices appeared because she moved the muscles in her face, he held them closed with the end of his pencil. She failed the test. She was distraught and had to be carried to bed.

More visitors arrived and were impressed by Margaret, including Mr. Kirwan from Charleston, South Carolina. Margaret was able to tell him the colour of the metal of his watch, and of the ribbon attached to it, despite having her eyes closed with sticking plaster and a blindfold of black silk, covered with another silk handkerchief.

The house was almost under siege. The gentility flocked. Renwick listed them: Mr. Bootle Wilbraham, and a part of his family from Lathom, Mr. and Mrs. Pilkington of Bolton, Mr. and Mrs. Gaskell 2, Mr. Lyall, Mrs. Willis Earle and daughter, Miss Lutyens, Mr. Josiah Williamson, the Bishop of Chester, Lord Lilford, Mr. Ireland Blackburne. There were many others.

Shortly afterwards, Margaret suffered a final relapse. She died on 9 August and within twelve hours her body was on the dissecting slab, the doctors keen to see if her body would reveal clues as to her reputed powers. They were disappointed. There appeared to be no organic disease, her brain was normal and her eyes showed no atrophy.

Was she blind? I do not think so. In this she was most certainly faking it. But she may have been innocent. It is possible that her apparent inability to see was really elective blindness, brought on by the trauma of her original illness or by some other cause. Or perhaps some of her observers were at least half right when they theorised that she actually had heightened powers of sight: synaesthesia combined with an ability to see, however weak, might account for her compulsion to touch and interpret objects of different colours. It is unlikely that, if she were blind, her other senses developed in compensation to the point that she could read and sew and discern the colour of objects through her fingertips.

Imposters pop up at any time, and the Georgian era certainly provides many entertaining examples. Margaret McAvoy’s case, however, is imbued with sadness, not only for her early death (she was only 20) but because her motivation was most probably to seek attention. Neither she nor her family appear to have importuned their visitors, who were of higher rank than themselves, but they did seem, at times, unable to turn them away. For someone who frequently sought her sickbed, she maintained a busy receiving schedule.

In his Narrative, in order to demonstrate that he is not a naive dupe, Dr. Renwick makes a passing reference to Ann Moore, “the fasting-woman of Tutbury” who attracted crowds and substantial gifts, when she claimed that she was able to survive on no food at all. She was exposed in 1813. Renwick would not be the first medic to be so duped. This was an age of great curiosity about the body, and fascination with those who had unusual characteristics, but little sound scientific understanding. Some things in life defied obvious explanation. This perhaps was one of them.