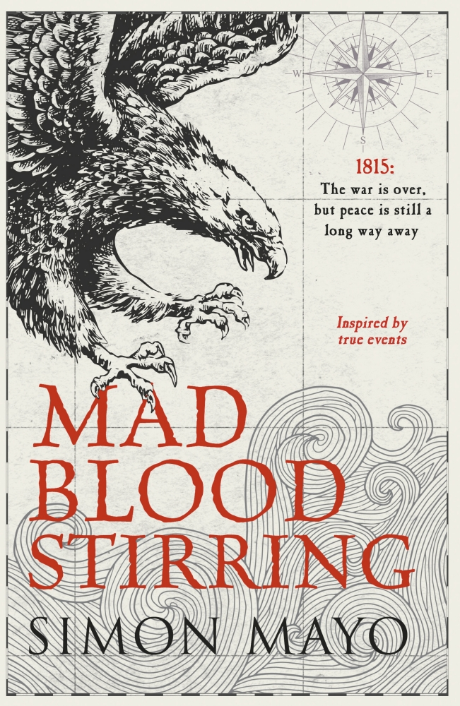 In June 2018 Donald Trump had a bad-tempered call with Justin Trudeau in which, apparently referring to the 1812–14 war, he claimed that the Canadians had burnt down the White House. In fact, it was the British who did this.

Trump is probably not alone in his shaky understanding of this war. No one seems to remember why it started (blockades on neutral trade with France, since you ask) or how it played out (battles on America’s borders and coasts and lots of naval interactions).

Simon Mayo’s novel, which is set after the war ends in December 1814, does not put us straight on the whys and wherefores but focuses instead on the fate of a batch of American prisoners of war newly arrived at Dartmoor prison. The story is based on truth, meaning that although Mayo has played a bit with the timing of events, the essentials of the plot are correct.

In Mayo’s novel, a group of American sailors captured from the Eagle join thousands of their compatriots who have been incarcerated for months in terrible conditions, and where racial tension has almost reached a crisis. The prisoners have already been segregated: the white prisoners occupy six blocks while the black prisoners occupy one, which is ruled by ‘King Dick’ aka Richard Crafus, who commands respect by the liberal use of his cudgel, his unusual height (six foot four) and his sharp-witted intelligence. A gang of murderous white thugs known as the Rough Allies periodically target black sailors. One of the newbies, 16-year-old Joe Hill, knows that the war is over and announces it. Unfortunately, although this is true, the peace treaty had not yet been agreed and so the prisoners must wait, itching for their promised liberation. The black prisoners decide to put on a play – and yes, this is absolutely factual. They had already performed Othello and now they decide to do Romeo and Juliet.

In early April, the British discovered a hole in an inner wall and interpreted it as an escape attempt. In the ensuing conflict, they shot many unarmed Americans, some of whom died (sources differ on the exact number but it seems to have been between seven and 10).

I won’t go into the plot of the novel in detail because it is the non-fiction themes that interested me. All I’ll say is that Mayo has given the book a Shakespearean format: five acts within which are a number of scenes. He has previously written thrillers so it is not surprising that the book, in places, reads as if he had a film or TV adaptation in mind. (I note, after writing this that The Guardian thought the same.)

In sum, Mayo has done a brilliant job bringing to life this little-known episode. His research is excellent and he has used imagination and skill to construct an engaging plot. The historical details are intriguing and prompted me to read more about the facts. I would like to know more about Richard Crafus and the fate of black sailors who refused to sail home on ships bound for the slave-holding southern states. I’ve added it to my long list of possible projects…

FURTHER READING ON US PRISONERS AT DARTMOOR

Sketch of Dartmoor Prison by one of the prisoners.