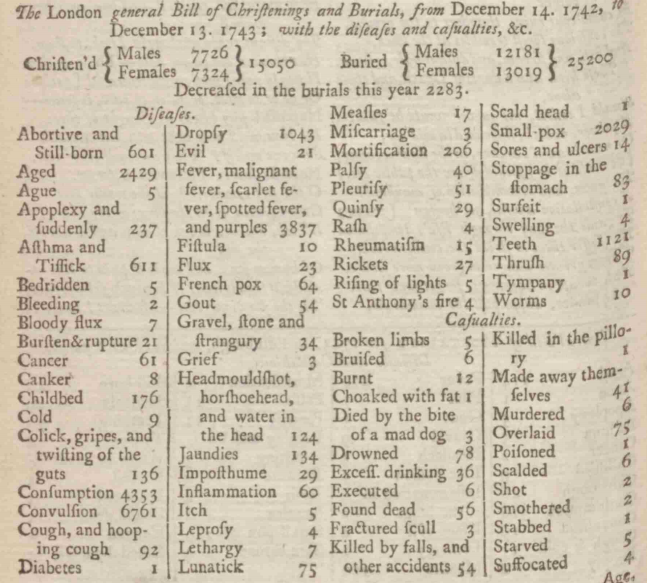 1743 Bill of Mortality published in The Scots Magazine, 3 December 1743 © British Library Board

Some diseases and casualties are archaic, and deserve some explanation:1

Evil: The King’s evil or scrofula, a tubercular infection of the throat lymph glands.2

Headmouldshot: This is when edges of the sutures of an infant’s skull overlap, resulting in convulsions and death. Possibly the root cause was birth injury, often the result of the mother’s rickets which would have led to deformity of the pelvis.

Horseshoehead: Inflammation of the brain.

Imposthume: A collection of pus in a cyst.

Mortification: Death or decay of one part of a living body; gangrene or necrosis.

Overlaid: The suffocation of infants when an adult falls asleep on top of them.

Purples: Spots of a livid colour, which break out in malignant fevers. Possibly meningitis.

Rising of the lights: Croup, primarily a disease of infants and children. Essentially this is any obstructive condition of the larynx or trachea (windpipe), characterised by a hoarse, barking cough and difficult breathing.

Scald head: Diseases of the scalp characterised by pustules (the dried discharge of which forms scales) and by falling out of the hair.

Strangury: Restricted urine flow. This could have included bladder stones.

St Anthony’s fire: An acute infection typically with a skin rash, usually on any of the legs and toes, face, arms and fingers.

Teeth: This usually meant children who died while their deciduous or ‘milk’ teeth were erupting.

Tissick: Consumption, although this is also listed separately.

Causes of death in the Georgian era always make entertaining reading. Strange terms (tissick, rising of the lights) and symptoms (itch, lethargy) that were not diseases at all. The distance of time makes the stories behind the statistics less awful. When we are not mildly amused by all this, we pity the patients of doctors hampered by ignorance and lack of science.

But the advance of medical discovery is unending and no doubt historians of the future will be guffawing over mistakes made by our own lab technicians, coroners and doctors.

Parochial Registration and the Bills of Mortality: case studies in the age structure of causes of death in urban areas between 1583 and 1812 by Gill Newton, Cambridge Group for the History of Population and Social Structure