After an indifferent and short summer, autumn, my favourite season, has arrived. Usually I am looking forward to all the mists and mellow fruitfulness but this year I am troubled by talk of shortages of food through a lack of workers to bring in the harvest – farming still relies on workers.

My thoughts turned to farming in the 18th and 19th centuries and specifically to the business of bringing in the corn.

The harvest was not only an important festival in the religious calendar but it was an opportunity for a major end-of-season celebrations, a time for the community to come together and work together. Activities need not always meet approval. Charles Vancouver, who surveyed Devon for the General View series in 1808 (an initiative of the Board of Agriculture), complained that the harvest encouraged ‘practices of so disorderly a nature, as to call for the strongest mark of disapprobation, or at least a modification of their pastime after the labours of the day.’2

Unsurprisingly, autumn was seen as a time of romance, an opportunity for intimacy between men and women who worked together closely in the fields. 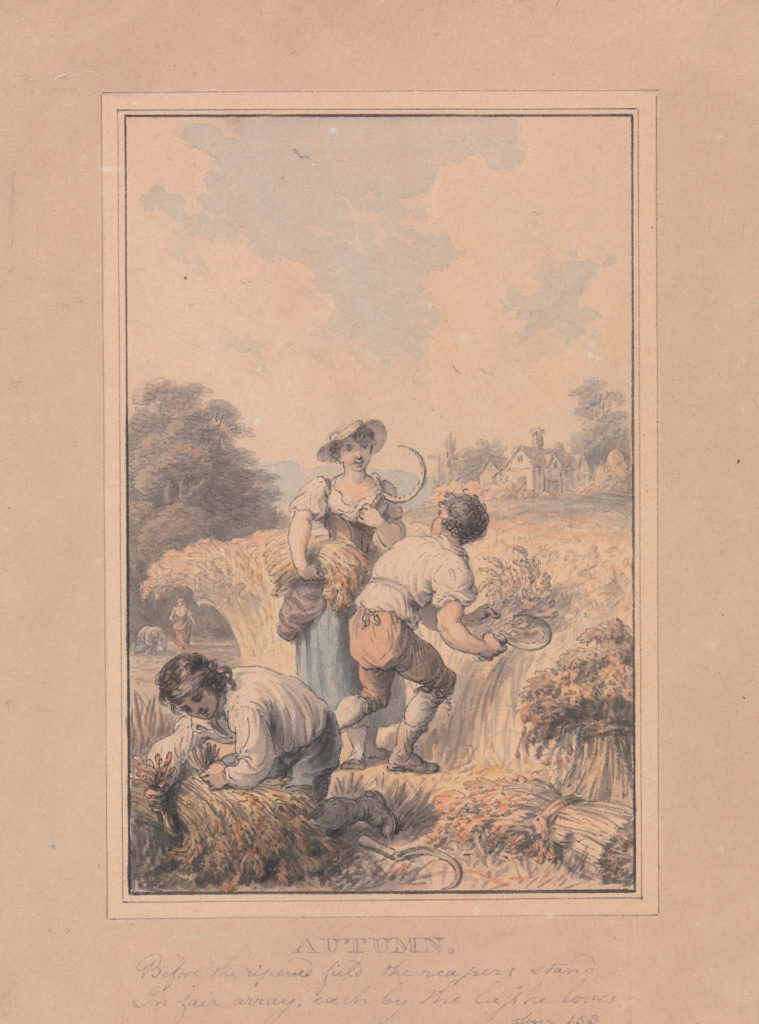 Before the ripened field the reapers stand
In fair array; each by the lass he loves
Thomson’s Seasons – ‘Autumn’

After the reaping, the sheaves were brought into the barn, opened and laid out to be threshed with a flail to separate the grain (edible) from the chaff (used for animal feed). This was an exhausting process requiring intense physical strength. The contemporary spelling thrashing gives an idea of the force involved. Vancouver says that in Devon, unlike the reapers, the threshers were paid.

The process of threshing was considerably speeded up with the introduction of mechanisation. Vancouver described what he called a ‘very good’ water-powered threshing machine belonging to Mr Vinn at Payhembury, which could thresh, winnow, grind and could be adapted to crush apples and shell clover seeds. There were horse-powered versions and, later, steam. 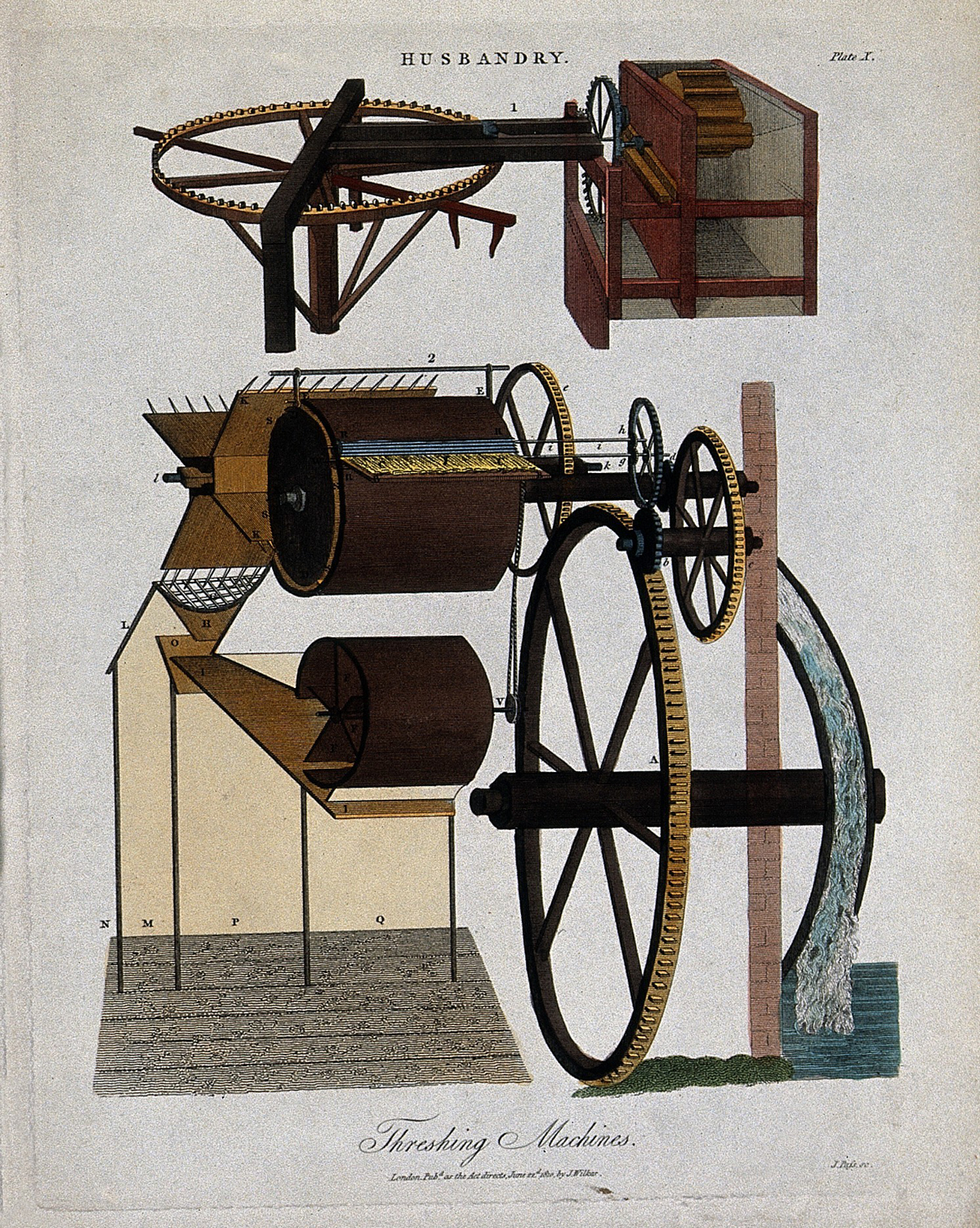 Naturally, the machines required less physical strength than manual threshing, which meant that women and children could be employed in greater numbers. Some saw this as an advantage because the men could be directed to more arduous tasks. In Vancouver’s opinion there was actually more employment rather than less and everyone, from the workers to the parish authorities, would benefit.

Unsurprisingly, the workers did not agree with this. They knew that their role overall would be diminished and reacted with anger and threats, and sometimes with riot and machine-breaking. The introduction of threshing machines was a contributory factor in the rural disturbances known as the Swing Riots of the 1830s.

After threshing, the reeds were gathered up and the corn and chaff swept into a pile to be winnowed. Winnowing could be done manually using a ‘fan’.

Sometimes a machine was used. This was placed in the middle of the barn whose the doors were kept open to create a draught. The grain and chaff were poured into the machine, which ejected the chaff into the farmyard and grain dropped into a bucket at the side, to be packed into sacks and sent to the miller. 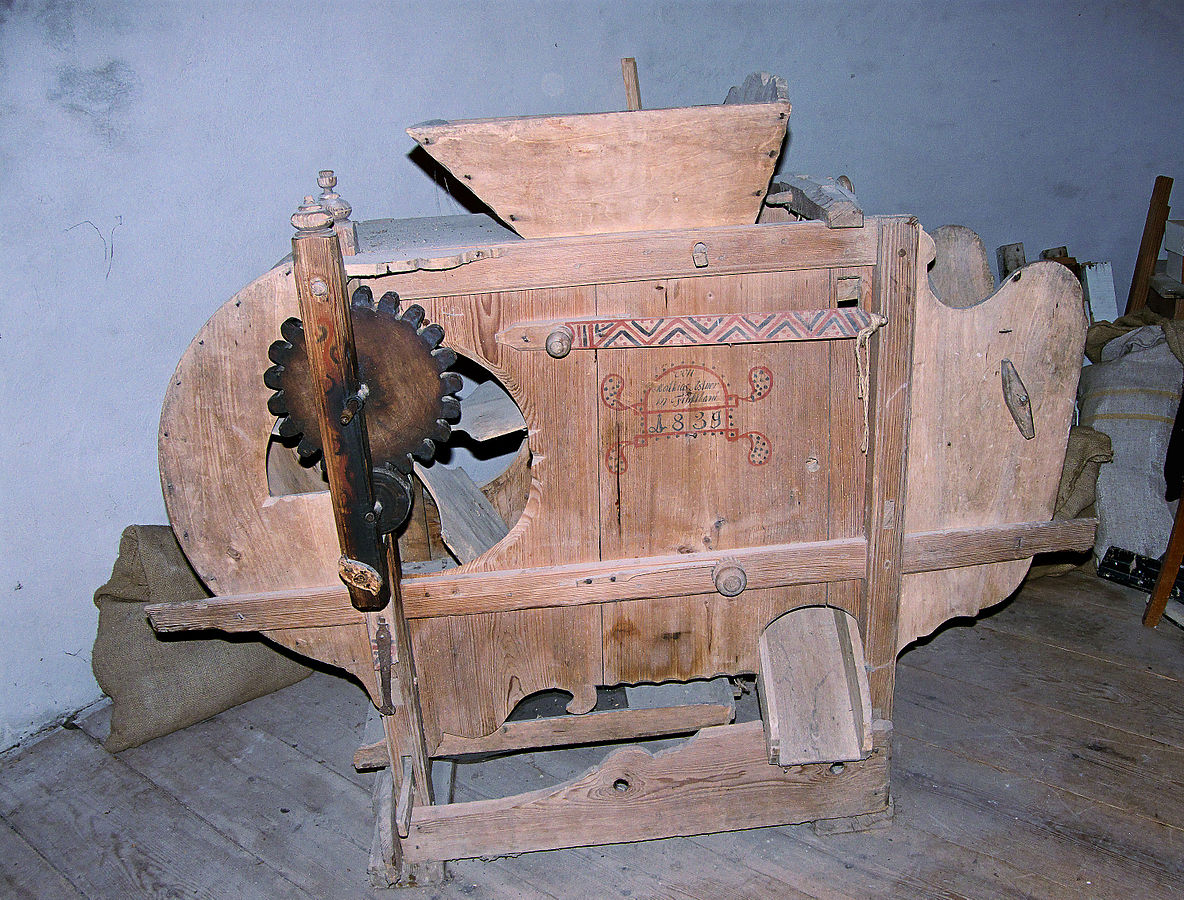 The last stage was combing the reed. The loose straw and chaff were removed with a large wooden framed comb with iron teeth and the reed dried and used for thatching the roofs of barns and houses and also for protective covers for hayricks.

The ancient celebration of the harvest took place during the Harvest Moon, originally a pagan celebration (the earliest church service for harvest has been traced to 1843 at Morwenstow in Cornwall). 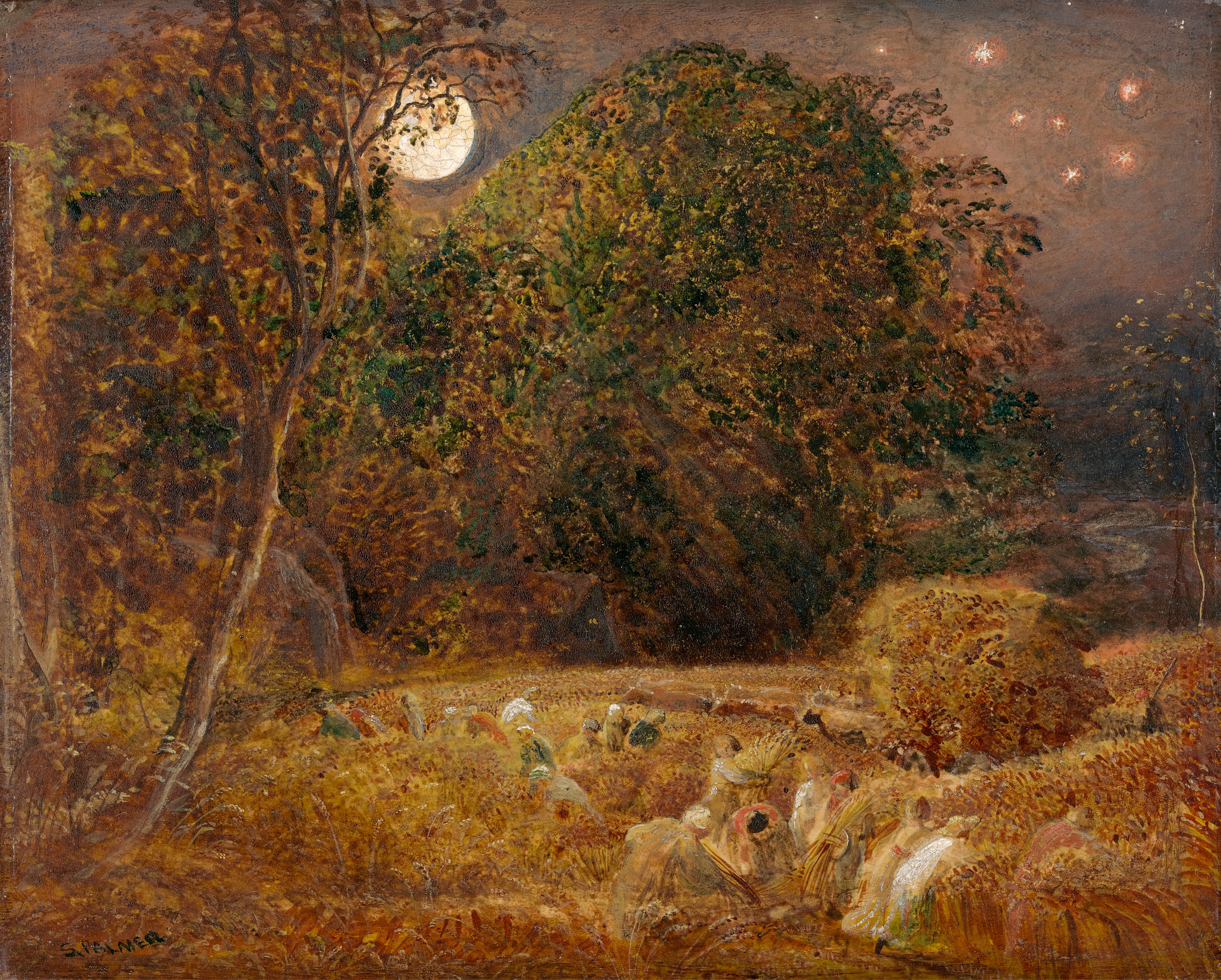