It is easy, amongst all the depressing talk of a resurgence of anti-Semitism, to forget that there was, and perhaps still is, the opposite: philo-Semitism. The late-Georgian period was a time when there was a strong fascination with the Jews, for their perceived exoticism (note the mention of the “beautiful Jewesses” in the report) as well as for the tantalising possibility that they could be persuaded to convert and come over to the “true religion”.1 (Not sure whether this is true philo-Semitism but perhaps it shows a regard, however ill-founded, for the safety of Jews’ souls.) 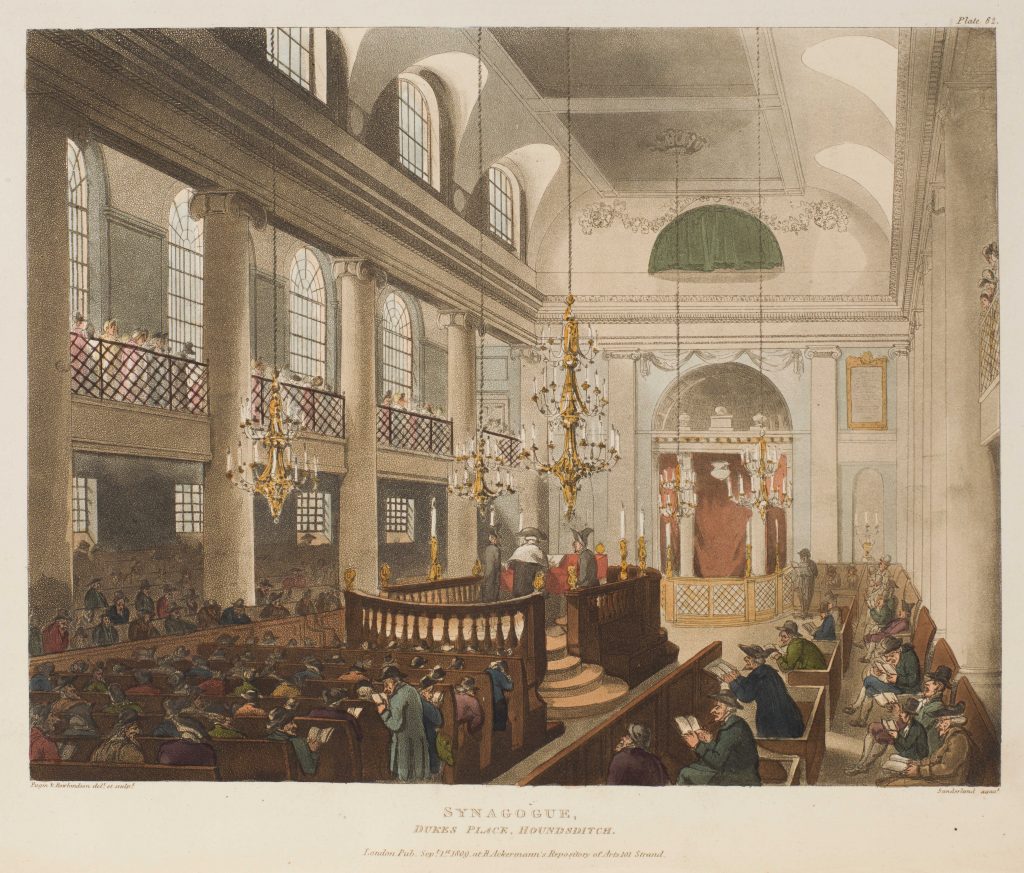 Synagogue, Duke’s Place, Houndsditch. From Thomas Rowlandson (1756–1827) and Augustus Charles Pugin (1762–1832), The Microcosm of London or London in Miniature. Courtesy of romanticlondon.org

The British Establishment and the Jewish community needed each other: the Jews appreciated the protection and the public display of tolerance, even affection; the upper echelons, and the government, relied on the richest Jews for help with funding and finance.

And this piece describing the visit of three of George III’s sons to the Great Synagogue is a perfect example of their mutual reliance.

Abraham Goldsmid who, seems to have sponsored the event, was the son of a Dutch merchant to settled in England in 1763. Both Abraham and his brother Benjamin were bill-brokers and were noted for their generosity. 2

Friday, at half past six o’clock, the Dukes of Cumberland, Sussex, and Cambridge, attended the great Synagogue Dukes-place, to witness the Hebrew form of worship. The preparation made to receive the Princes evinced the loyalty of the Jewish people, and the spectacle was magnificent and most solemn. The Synagogue was most superbly decorated on the occasion. The seats on each side were raised, and the pulpit in the centre was adorned crimson and gold. A space between the pulpit and the ark was appropriated to the Royal Dukes and the Nobility, who stood on a rich platform with four beautiful Egyptian chairs and stands for their books, flowers, &c. The ark was also superbly ornamented. A crimson curtain, embroidered with gold, hung before it, and the light of an Egyptian lamp added to the solemnity of the scene. The Synagogue was brilliantly illuminated by chandeliers. The High Priest Rabbi (Hirschell) in his sacerdotal habit, displayed unusual magnificence; he was dressed a robe of white satin, of considerable value, ordered for him expressly by Abraham Goldsmid esq. The Dukes arrived in the carriage of Mr. Goldsmid, and their carriages followed, with several Ladies of distinction.

The singing was excellent, and the Royal Dukes appeared much gratified by the Chorusses. When the Ark was opened to take out the five Books of Moses, the Princes were conducted by Mr. Goldsmid to view the interior, at which they expressed great satisfaction the structure being grand and beautiful. The High Priest, in honour of the Royal dukes, made offering to the charity of fifty guineas, and the ceremony throughout was extremely interesting. The galleries were crowded with beautiful Jewesses, who attracted much the attention of the Royal Party.

After the service the Royal Dukes went to the mansion of Mr. A. Goldsmid, where a sumptuous entertainment was provided, which was followed by a grand concert.

The Great Synagogue was destroyed in 1941 in the Blitz.