While researching my third book for Pen & Sword – which is about a rape-murder during the Regency period – I have been looking at other deaths and unsolved cases. The case I am investigating involves a possible sudden suicide so I was interested to find this sad tale of drunken violence and misadventure in The Observer of 28 September 1817.

SUSPICIOUS DEATH OF A FEMALE

An inquisition has been taken, before Thomas Stirling, Esq. Coroner for Middlesex, at the Swan, near Fulham-bridge, to investigate the cause of hte death of Maria Cooper, a young woman only twenty years of age, there lying dead, whom it was generally reported, was thrown off Fulham-bridge into the Thames, and drowned. 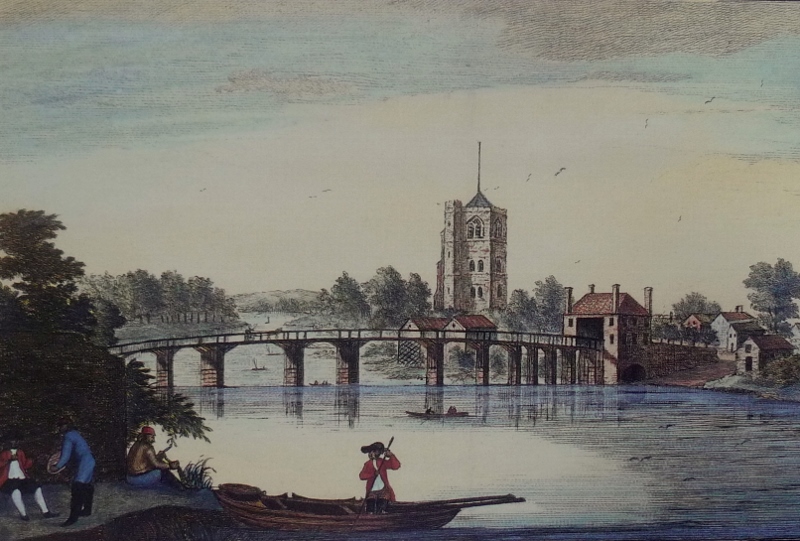 Fulham Bridge in 1742, with Fulham Church in the background (via https://lbhflibraries.wordpress.com/2014/10/15/the-building-of-fulham-bridge/). The bridge was pulled down and replaced with Putney Bridge.

Thomas Gerrard, brush-maker, of Fulham, stated that he knew the deceased; she lived at Wandsworth; on Sunday last he was in company with a young man named Jones, at the Golden Lion, Putney; witness went to the door about nine o’clock at night, and saw the deceased come along the road; he took her to have som ebeer in the house with him and Jones; they drank several pints of beer, and she drank some spirits; he remained drinking with them till eleven o’clock at night, when he left the deceased with Jones; he went home to Fulham; the next morning he heard a report that the deceased had been pushed off Fulham-bridge by a young man.

The old Golden Lion near Fulham Bridge, where Maria Cooper spent the evening drinking with Thomas Gerrard and William Jones. The pub was rebuilt in 1836. Via https://rbkclocalstudies.wordpress.com

William Jones, tailor, at Putney, stated that he was in the company of Gerrard at the Golden Lion, Putney, on Sunday night; Gerrard went out of the room, and shortly after returned with the deceased, who sat down and drank some spirits; they remained drinking till eleven o’clock when Gerrard went home; witness sat drinking with the deceased until twelve o’clock and left the house with her; they walked together along Wandsworth-lane, and called at another public-house, and got a pint of beer and a glass of gin; they were both rather intoxicated; the deceased asked him to take a bed at a public-house; this he refused; she called him ill names; and being both tipsey, they began to quarrel; they had then got to the end of Fulham-bridge; he gave the deceased a shilling to pay for a bed for herself; he told her that he was resolved to go straight home; at that moment two gentlemen came up, and she informed them that he was ill-treating her; he denied it; they said that they would take her part; he paid the toll for her to pass over the bridge; he and the strangers walked together; the deceased kept behind about 10 yards; he heard one of the strangers call out “stop, stop;” he turned round and saw the deceased on the railings of the bridge, and before they could go to her, she had thrown herself into the water; they endeavoured to get a boat, but no one could be got; he saw her rise to the top of the water several times, and then sink; he went home immediately.

Coroner: “Do you think she drowned herself from your ill treatment?”

Coroner: “You refused to stay with her; what was your reason for that?”

A: “Because I had an idea she was pregnant, and thought she only wished that she might have an opportunity of swearing the child to me.”

Mr. Henry Gyde stated that he was walking towards Fulham-bridge on Sunday night, about twelve o’clock; a stranger was behind him a few yards, walking the same way, and overtook him close to the turnpike, at the end of Fulham-bridge; they heard two persons (the deceased and the last witness) quarrelling; they went up to them; the deceased said that Jones had struck her, but he denied it; they walked with the deceased, and promised her that they would prevent Jones from striking her again; Jones paid the toll for her, and walked over the bridge with them; the deceased purposely lagged behind; as witness, Jones, and the stranger got about twenty yards beyond the middle of the bridge: on a sudden he turned round to look for the deceased, and saw her in the act of getting on the railings of the bridge: he called out “stop, stop,” and ran towards her, but she had thrown herself into the Thames before he got to her; he went in search of a boat, but could not get one any where; it was high tide, and the force of the water carried her through the centre arch; he saw her struggling on the other side, and then sink; he went to the turnpike house and informed them of the circumstance; he was certain that she was not thrown in the water, but threw herself in, when no person was within twenty yards of her; it was a moonlight night. 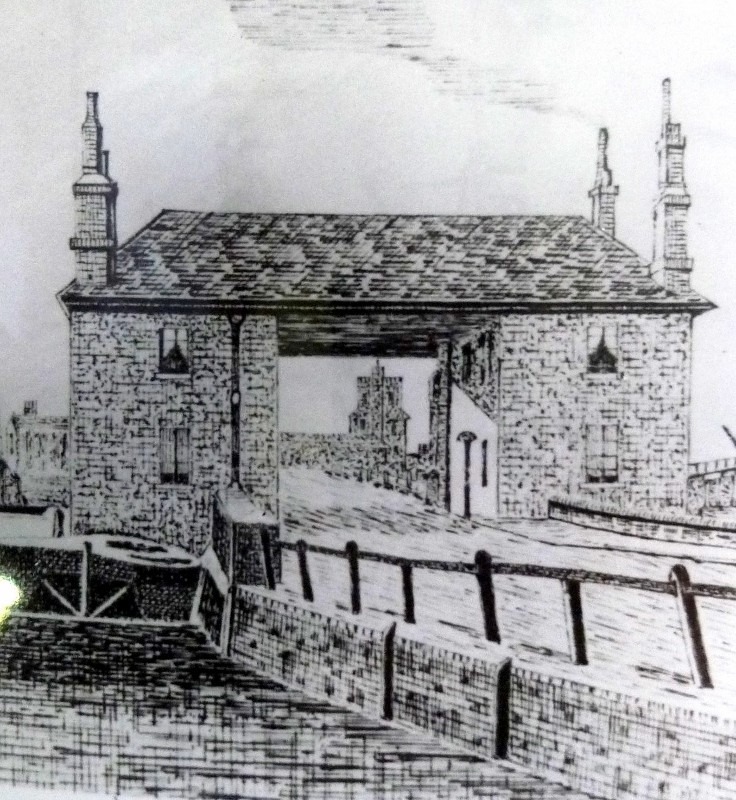 William Humphreys, toll-keeper, Fulham-bridge, said, that he saw the party go through the gate; they appeared to be quite intoxicated and quarrelling; he heard something fall into the water, and went towards the centre of the bridge; he met last witness & informed him that the deceased had jumped over the railings into the Thames.

The Garden of the Swan Inn, Fulham, by Thomas Rowlandson.

Thomas Phelps, waterman, Fulham, stated, that on Monday morning last, he was informed that a person had been thrown into the Thames off the bridge; he took his boat and rowed about, and at length found the body about twenty yards from the centre arch, covered with about two foot of water: he got her out and conveyed her to the Swan.

The Coroner said that there was not the remote grounds for supposing that she died from the act of any person: the only thing they had to consider was, whether she was sane or not at the time. Verdict: “Drowned herself, being at the time in a state of insanity.”