In 2001 the media broke the story that medical staff at Alder Hey hospital were routinely removing organs from the bodies of dead children without seeking appropriate permission from the parents. Plus ça change.

This sad tale is from The Observer, 13 December 1818 and vividly illustrates the frustration of an impoverished mother who has lost her child and finds herself pitched against the seeming indifference of a middle-class surgeon. 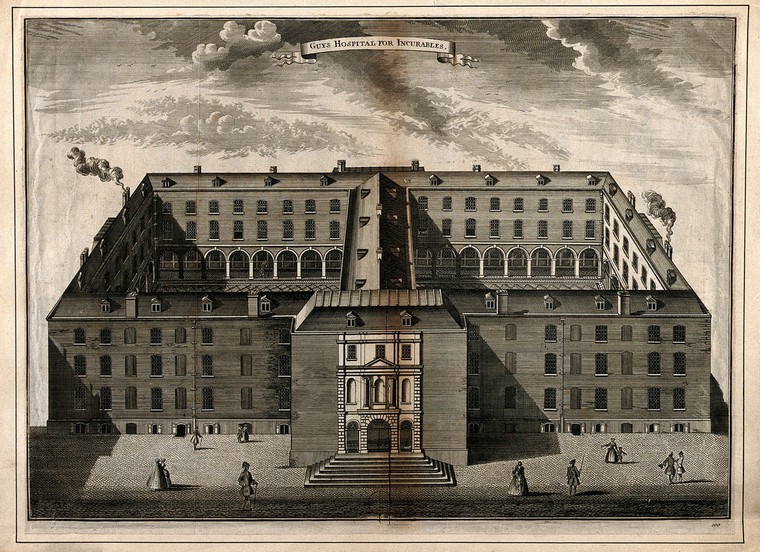 A quick trawl of Google throws up nothing about Dr. Chumley of Guy’s Hospital nor, of course, anything about the bereaved mother, Mary Redmond. Mr. Stocker was the well-known Apothecary to Guy’s.

Joshua Jonathan Smith, the hero of the story, was Alderman of Castle Baynard Ward from 1803 to 1831, Sheriff, 1806–9, and Lord Mayor, 1810–11.  He was also a judge at the Old Bailey and was known and applauded for his fair dealings and upright defence of civil liberties. He died on 15 July 1834. His kind-heartedness is also shown in his support for Emma Hamilton; he aided her flight from her creditors to Calais and bought a substantial number of relics from her, including the Trafalgar coat and many of the letters to her from Lord Nelson, in order to provide her in  funds.

A case of a very uncommon description has been heard at Guildhall before Alderman Joshua Jonathan Smith. It has seldom happened that the feelings of a number of spectators have been more strongly expressed, and never has a higher compliment been paid to an alderman than was paid upon this occasion. An Irish woman, named Mary Redmond, was brought by an officer before the Alderman, upon the charge of having threatened to destroy Dr. Chumley, of Guy’s Hospital, and of having attempted to extort money from him under the strange circumstances undermentioned.

Dr. Chumley stated, that the prisoner had gained admission for her child into Guy’s Hospital about three weeks ago, on a Wednesday. He saw the child upon its admission, but was obliged to out of town the next day, and stay till Friday. Upon his return he learned that the child had died on Thursday in his absence. There was, he observed, a privilege existing in Guy’s Hospital, as well in all others, which authorised the medical practitioners, if any thing extraordinary appeared to have attended the decease of a patient, to open the body in order to ascertain the nature of the appearance. Mr. Stocker, of Guy’s Hospital, thought it necessary to examine the child. Some time after it had been buried, the prisoner came to Dr. Chumley, upon whose bed ticket the child had been received, and accused him of having butchered her child, in consequence, he said, of his refusal to comply with an improper and unwarranged demand of two guineas. The consequence was, a mob got round him, and the charge having been made with great vehemence, there unavoidably arose a strong rejudice against him. The answer he returned to the woman was, that he had not examined the child in a manner which called forth such language, and in fact that he had not given orders to that effect, nor seen it after the decease. He offered her, as she was a poor woman, five shillings; but at the same time resolutely resisted all attempts at extortion. Still she continued her noisy applications in the streets, at the hospital, and at his house, the door of which she was constantly assailing. The alarm of Dr. Chumley increased with her increasing violence. She called out to him upon many occasions, in a furious tone, that he had murdered her child, and that she would butcher him in the same manner, namely, but cutting his throat and ripping up his belly. The Doctor, under such circumstances, felt hat if the woman was not restrained from the power of doing him an injury, his life was in danger.

Alderman Smith: What was the nature of the complaint of which the child died?

Doctor Chumley: It died of fever. The body was opened, but not dissected.

Alderman Smith: Do you consider it necessary in cases of fever to open the body?

Doctor Chumley: There was in this case some difficulty about the glans of the throat; which, it was considered, rendered it necessary.

Alderman Smith: The reason I ask is, that there is a strong feeling in parents against the practice, and whenever the necessity did not exist, there is a palpable impropriety in the experiment. The parents are, I suppose, consulted before the examination takes place.

Alderman Smith: What! not asked?

Dr. Chumley: It is not generally done. There is a printed form in the hospital, which is handed to the friends of the patient when he enters the hospital, and which informs them of the privilege, and is an authority for our dissection.

Ald. Smith: The neglect to make a communication to the parents of this child is not to be justified. Anyone who has feelings must know that a mother feels dreadfully in such a case.

Dr. Chumley: She did not make a complaint for three weeks.

The poor woman called God to witness that she had complained from the moment her mangled child was given to her. She said the physician had determined not to give up her babe till they had cut the throat and belly, and taken out the bowels; that proper attention had by no means been paid to it in the hospital, where it had died in her arms; that thought she was in great poverty, and should be obliged to send her children to the parish; and though the body had been so cut and hacked, those in the hospital refused to let her have it till all the dues were paid. She was also, she declared, refused a shell in the hospital, and was consequently obliged to buy one to take her child away. As soon as she came to the hospital on the Friday evening, it was delivered to her cut as she described, partly sewed up, but without any intestines. The doctor had, she said, when she applied to him for two guineas, to which she thought herself entitled, offered her five shillings, and said at the same time, that was well for her her child had died.

Doctor Chumley: To prevent any wrong impressions from being made upon the public mind, I think it necessary to state, that the gentleman appointed to enter into the necessary examination, take special care that nothing more is done than is absolutely necessary. This child died of a disease which is frequently fatal to children, perhaps more so than any other. The examination was necessary.

Alderman Smith: If she had refused to take away the body, as is the case with some parents, the operation would not be improper; but this mother seemed most anxious to get away the body as soon as possible. She was prevented, and nothing can justify the conduct of those who had disfigured it. When she addressed you in the language of which you complain, Dr. Chumley, she spoke from no premeditated intention to injure you. It was merely giving vent to her tortured feelings.

A medical friend of Dr. Chumley here interposed: It cannot be denied, Sir, that a very violent outrage has been committed against Dr. Chumley.

Alderman Smith: I answer that this thing ought not to have been done. If it gets before the public that such practices prevail what must the feeling? A serious injury has been done this poor woman, and I think, Doctor, that it woudl have been much better of you to have paid the two guineas than to have brought her here.

Doctor Chumley’s friend: It would be a most dangerous precedent, and cannot been acceded to. I assure you, Mr. Alderman, that the examination of the human body is attended with admirable effects known only to medical men. It is the most prolific source of improvement imaginable, and nothing can take place to give the examination a character unnecessary or barbarous.

Alderman Smith: I am aware of the strong necessity but nothing should have been done without the authority of the mother, who if she has any feeling at all, must be wounded most deeply by the exhibition just described. I shall discharge this poor creature – (A murmuring applause, which was with difficulty restrained from being very noisy, was frequently heard during the observations of the Alderman.)

The prisoner said she should not have asked a half-penny if her child had been given to her as she went out of the world.

Still the necessity of security the Doctor was urged. Upon its repetition, Alderman Smith said, “Doctor, if you are not satisfied with my decision, you may apply for redress to the Sessions.”

The Alderman then told Mary Redmond that he had made allowance for her irritated feelings, but must censure her application for money where there was no claim. He desired her not to repeat it; but if she thought she had a claim upon the hospital to apply to the treasurer, who would, he trusted, see the propriety of complying with her demand.