Our children are grown up and have left home but I keep out some of their toys just in case a child visits us. I miss shopping for children’s playthings. Perhaps, as we head for Christmas, that is why my thoughts turned to images of children playing in the 18th and early 19th centuries.

Health and safety standards have changed since this image from 1818: no one would let their child buy a whip. Skipping ropes and hobby horses still have their place, though. The children look lively and real, and on page 32 are clearly being quite naughty. It was published by John Harris (1756–1856), who operated out of 21 Ludgate Street, in the corner of St Paul’s Churchyard between 1805 and 1843. 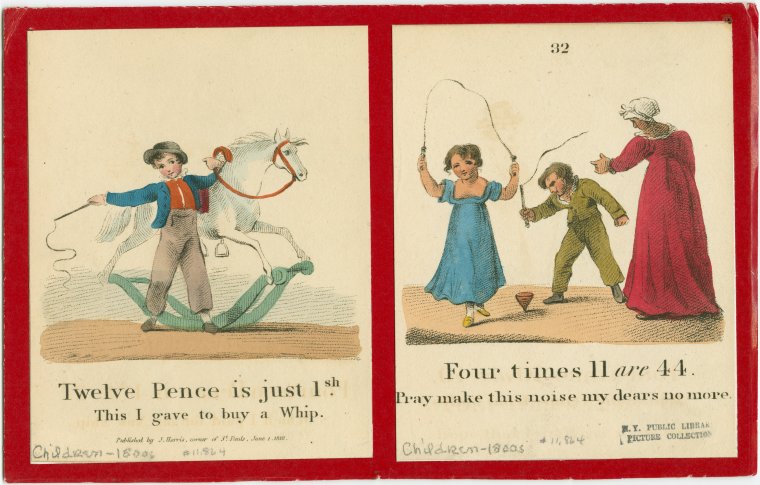 By contrast, a high society scene by Johann Zoffany, who introduced this genre of relaxed group portraits to England. John Peyto-Verney, 14th Lord Willoughby de Broke, his wife Lady Louisa North and three children. The toddler standing on the table taking her first step while one brother sneaks some bread and butter from the table  and another rushes about with a toy horse. 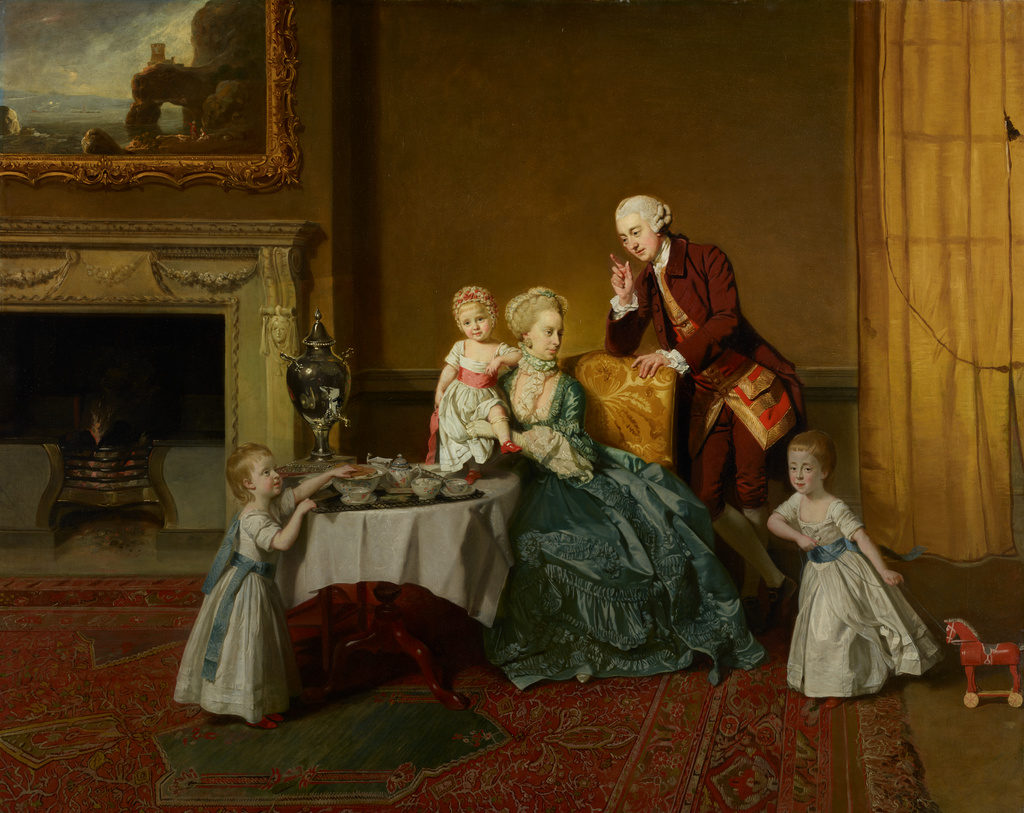 There are scant details about this next image, catalogued in the Wellcome Library only as ‘Children are playing a game with a bat and ball, others are skipping in the background’ (looks like early 18th century to me). The game is obviously cricket. Before the 18th century bats bats were often the shape of a modern hockey stick. One theory is that the game was first played using shepherds’ crooks.

Children are playing a game with a bat and ball, others are skipping in the background. Courtesy of the Wellcome Library

Ah, the joys of a summers day: naked bathing in the river (boys only). This peaceful scene, of the banks of the Wensum in Norfolk was painted by John Crome (1768–1821), the son of a Norfolk weaver and, apart from fleeting visits to London, was based in Norfolk for his working life. He was employed as drawing master at Norwich grammar school. 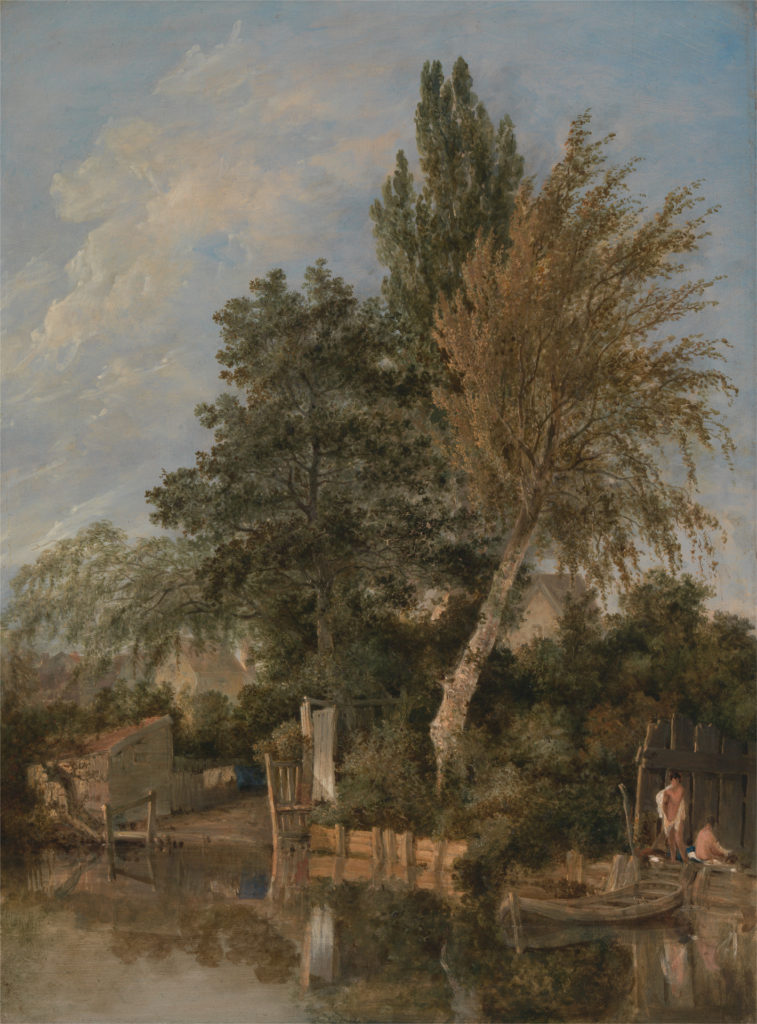 Finally, my favourite, by Benjamin West (1738–1820). Families at the seaside on a blustery day at Margate, complete with children playing or paddling in the water, a toddler in the arms of its stalwart dad, bathing machines and aloft a mother looking (anxiously?) down at the scene. 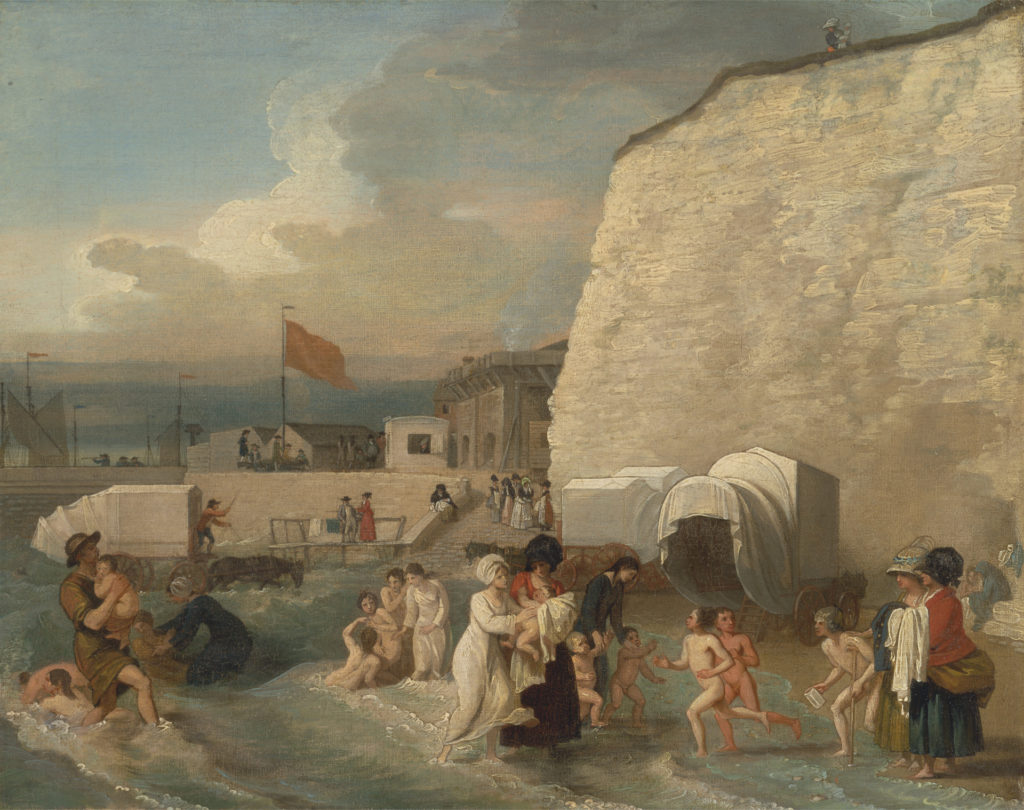