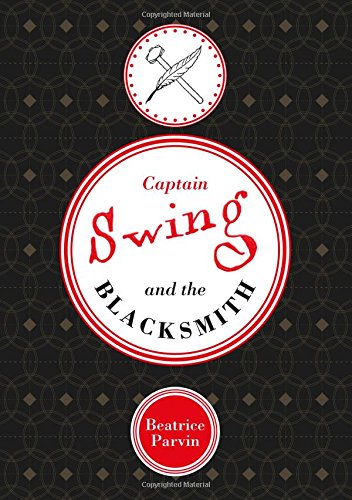 It’s nearly 200 years since the ‘Captain Swing’ riots – a spate of machine-breaking and arson in pockets of rural England in protest at the use of mechanised threshing during harvests. The incidents were often preceded by a warning letter to the farmer from a ‘Captain Swing’ that he was about to be targeted. (Read the post I wrote about the Captain Swing riots.)

The riots were a symptom of deep social changes: the increasing industrialisation of farm production led to the fracturing of traditional obligations between farmers and their workforce and the contributed to the creation of a new class of poorly-paid day-labourers.

Beatrice Parvin uses this backdrop to relate the fictional fortunes of Sue Trindall, who grows up in a Wiltshire village, works as an ironer of linen and occasional seller of buttons and lives with her alcoholic depressed father. She is practical, affectionate, loyal and intelligent but she is also vulnerable to the charms of the local blacksmith of the book’s title who falsely promises marriage. Aged seventeen she finds herself pregnant and is banished from home.

Her search for safety and stability takes her first to her sister, whose husband Sue suspects of being involved in the betrayal of her father to the authorities during the riots. She is ejected once more and now, her baby at her breast, she is homeless and desperate. Chance brings her temporary help and later on she is able to establish herself, in the village of Imber on Salisbury Plain.

There are so many layers to the novel: it describes both a real journey – Sue’s travels from her unhappy home to Imber – and a metaphorical one – the journey of a young woman from ignorance to confidence and independence. There are other threads too: Sue’s discovery that she can be in control of her own sexual behaviour rather than at the mercy of another’s depredations, as well as a plethora of historical detail: the best way to carry washing in a yoke, the work of a village scribe, life in a notorious workhouse. The writing is deft and assured and the history, whether it is detail about how people lived or the impact of profound social changes, never gets in the way of the narrative. Indeed, although the book is quite long the plot is well paced without becoming breathless.

Parvin was inspired by the traditional song ‘The Blacksmith’, a ballad of love betrayed, and the book is divided into eight ‘verses’ which reflect the lyrics, but she moves the story on so that Sue leaves her victimhood behind and takes the helm of her ship on the rocky sea of life. A CD featuring a beautiful rendition of this song, and other traditional music, is included with the volume.