After a mostly illustrious career in Ireland and England appearing as Miss Walstein or Lavinia Walstein, actress Eliza Edwards’ star waned. She fell on hard times, drank heavily and died of a pulmonary disease. 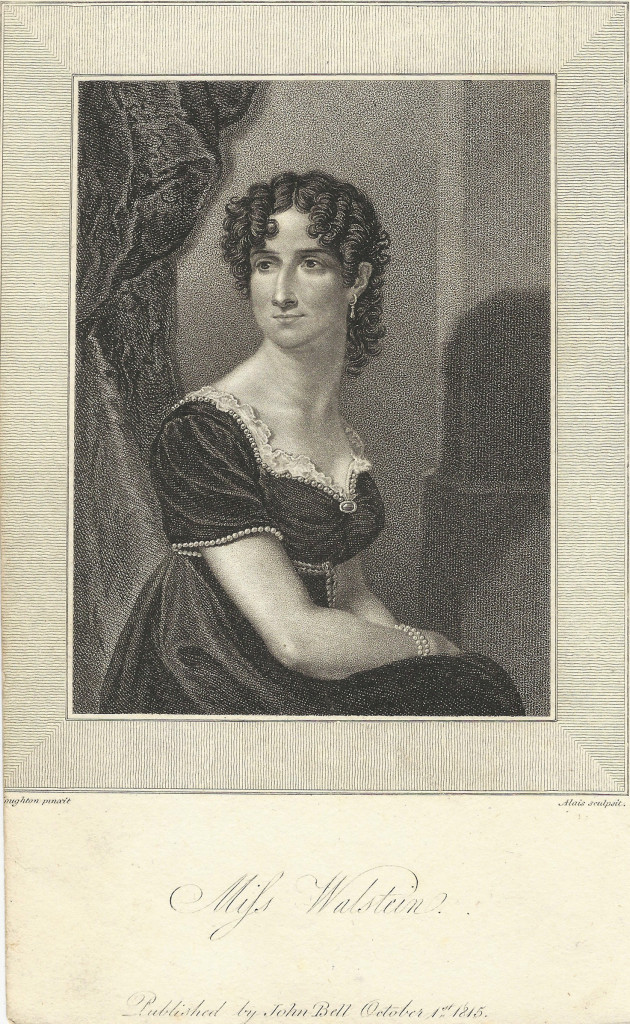 When no one claimed her body for burial, it was sent to Guy’s Hospital on the south bank of the Thames for dissection by doctors. To their amazement they discovered that Eliza was not what she had seemed. 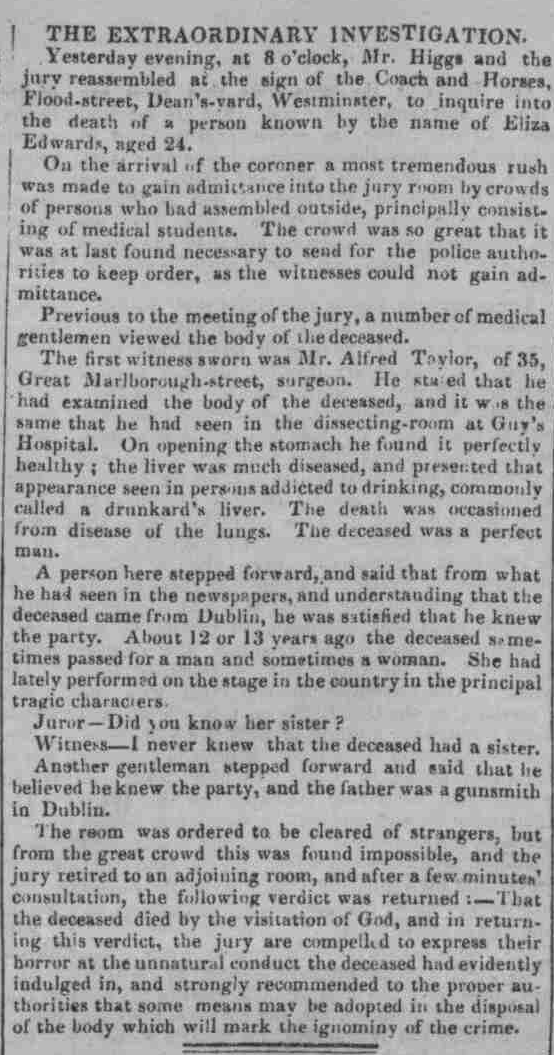 Yesterday evening, at 8 o’clock, Mr. Higgs and the inquest jury reassembled at the sign of the Coach and Horses, Flood-street, Dean’s-yard, Westminster, to inquire into the death of a person known by the name of Eliza Edwards, aged 24 [she was actually probably around 44].

On the arrival of the coroner a most tremendous rush was made to gain admittance into the jury room by crowds of persons who had assembled outside, principally consisting of medical students. The crowd was so great that it was at last found necessary to send for the police authorities to keep order, as the witnesses could not gain admittance.

Previous to the meeting of the jury, a number of medical gentlemen viewed the body of the deceased. The first witness sworn was Mr. Alfred Taylor, of 35, Great Marlborough-street, surgeon. He stated that he had examined the body of the deceased, and it was the same that he had seen in the dissecting-room at Guy’s Hospital. On opening the stomach he found it perfectly healthy ; the liver was much diseased, and presented that appearance seen in persons addicted to drinking, commonly called a drunkard’s liver. The death was occasioned from disease of the lungs. The deceased was a perfect man.

A person here stepped forward, and said that from what he had seen in the newspapers, and understanding that the deceased came from Dublin, he was satisfied that he knew the party. About 12 or 13 years ago the deceased sometimes passed for a man and sometimes a woman. She had lately performed on the stage in the country in the principal tragic characters.

Juror — Did you know her sister?

Witness — I never knew that the deceased had a sister.

Another gentleman stepped forward and said that he believed he knew the party, and the father was a gunsmith in Dublin. The room was ordered to be cleared of strangers, but from the great crowd this was found impossible, and the jury retired to an adjoining room, and after a few minutes’ consultation, the following verdict was returned:— That the deceased died by the visitation of God, and in returning this verdict, the jury are compelled to express their horror at the unnatural conduct the deceased had evidently indulged in, and strongly recommended to the proper authorities that some means may be adopted in the disposal of the body which will mark the ignominy of the crime.

An investigation of a very extraordinary nature took place yesterday evening before Mr. Higgs, the Coroner, at the Coach and Horses, Flood-street, Deans-yard, Westminster, on the body of a person who has been known for several years by the name of Eliza Edwards. We abstain from entering into particulars, further than merely to state that it had been discovered, after the death of the deceased, that a long-continued and successful deception had been practised with respect to his sex, and that, in the assumed character of a female, he had been living with several Gentleman in  succession, all of whom were said by the witnesses to be now abroad.

The Jury, on viewing the body of the deceased, which lay at St. Margaret’s workhouse, found that it was of very effeminate appearance, no sign of a beard beyond that of a boy of 17, and the whiskers seemed as if they had been plucked out with a pair of tweezers. The hair of the head was light brown, and upwards of two feet long behind, of a soft glossy texture, and the whole appearance of the countenance was that of a female.

The Coroner said it appeared to him to be one of the most horrible cases of depravity he had ever met with. The body, in consequence of its not being claimed, had been taken to Guy’s Hospital for dissection, where the astounding discovery was made, and the investigation was adjourned until this evening, in consequence of the non-attendance of the medical Gentlemen of that establishment. Some letters were read from one of the Gentlemen with whom the deceased had lived, and from his father.

The deceased was stated to have performed female characters under the name of Miss Walstein at several provincial Theatres, and among others at Tewkesbury and Norwich.