These two pieces, run together on page 4 of The Observeron 26 May 1816, give detailed accounts of food riots in the east and south-west of England. The high price of bread and other commodities was, in part, due to the terrible weather of 1815 and 1816. Unbeknownst to anyone was that the climate had been severely affected by a string of volcanic and seismic events, starting in 1811 with an earthquake in the Mississippi Valley and ending with the devastating eruption of Mount Tambora in the Dutch East Indies. 1816 came to be known as the Year Without a Summer. 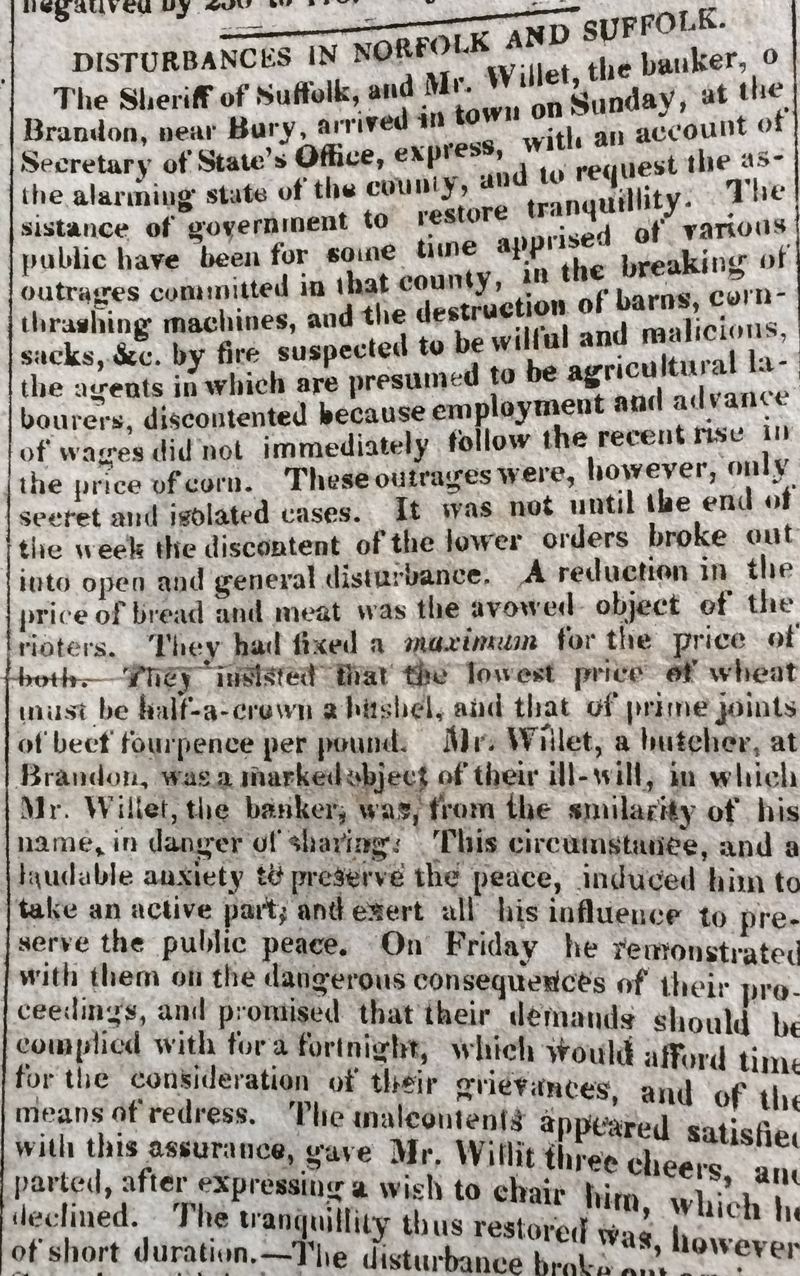 DISTURBANCES IN NORFOLK AND SUFFOLK

The Sheriff of Suffolk, and Mr. Willet, the banker, of Brandon, near Bury, arrived in town in Sunday, at the Secretary of State’s Office, express, with an account of the alarming state of the county, and to request the assistance of government to restore tranquillity. The public have been for some time apprised of various outrages committed in that county, in the breaking of threshing machines, and the destruction of barns, cornsacks, &c, by fire suspected to be wilful and malicious, the agents of which are presumed to be agricultural labourers, discontented because employment and advance of wages did not immediately follow the recent rise in the price of corn. These outrages were, however, only secret and isolated cases. It was not until the end of the week the discontent of the lower orders broke out into open and general disturbance. A reduction in the price of bread and meat was the avowed object of the rioters. They had fixed a maximum for the price of both. They insisted that the lowest price of wheat must be half-a-crown a bushel, and that of prime joints of beef fourpence per pound, Mr. Willet, a butcher, at Brandon, was a marked object of their ill-will, in which Mr, Willet, the banker, was, from the similarity of his name, in danger of sharing. This circumstance, and a laudable anxiety to preserve the peace, induced him to take an active part; and exert all his influence to preserve the public peace. On Friday he remonstrated with them on the dangerous consequences of their proceedings, and promised that their demands should be complied with for a fortnight, which would afford time for the consideration of their grievances, and of the means of redress. The malcontents appeared satisfied with this assurance, gave Mr. Willet three cheers, and parted, after expressing a wish to chair him, which he declined. The tranquillity thus restored was, however, of short duration.

—The disturbance broke out again on Saturday with increased violence, and the malcontents shewed themselves in considerable force. Their whole number amounted to 1,500, divided into several parties, & marched in several directions, for the purpose of attacking houses of those persons who were obnoxious to them. At Brandon they destroyed several houses, including Mr Willet’s the butcher; that they completely levelled to the ground. Another party of them proceeded to the village of Halesworth, it is supposed, for the like purpose; and the Sheriff of Suffolk, and Mr. Willet, the banker, saw on their way to London, about ten o’clock on Saturday night, a fire near Ely, which they apprehend was the mischievous work of another party of the rioters. They were armed with long heavy sticks, the ends of which, to the extent of several inches, were studded with short iron spikes, sharp at the sides and points. Their flag was inscribed “Bread or Blood!” and they threatened to march on London. The Sheriff of Suffolk, and Mr. Willet having laid this representation before the Secretary of State, received from him a promise of every possible protection, and with this assurance they left town on Sunday night on their return home.

The following has been communicated to us relative to the riot in the town of Brandon: – It being impossible to comply with the first request made by the rioters, a meeting was called at 12 o’clock on Monday, when they made a very formidable appearance, being assisted by numbers from the adjoining parishes. The inhabitants of Brandon have taken the subject into consideration, and have guaranteed the price of flour at 2s 6d. for a fortnight: and unless the millers reduce their prices by that time the officers of the parish will purchase their grain at the cheapest rate, and furnish the poor with provisions at prime cost. The rioters were perfectly satisfied, and tranquillity was completely restored. There is not a doubt but the occasion of this disturbance was the high price of beer [ref]Weak beer was very often drunk in place of water by most of the population, children included. It was altogether a safer option as it was less likely to contain dangerous microbes[/ref], bread, and meat and low price of labour, want of employment, &c.

Monday last, a great number of persons of the labouring class (owing to the late advance in corn and the lowness of wages) assembled at the village of Southrey in Norfolk, and immediately proceeded for Downham, between which place about seven miles distance) they forced the labourers from their houses and work to join them, and every person they met was compelled to return with them. When arrived at the latter place, the number amounted to nearly 1,500; they immediately commenced their scene of action, by entering the shops of the millers and bakers, and taking away flour, bread &c. The Upwell troop of cavalry were called out, and ten men and four women were taken and put into confinement; the rest gradually dispersed. The next day the rioters again assembled, when an agreement was made by the gentlemen to allow them an advance of wages, and to release those persons already taken, which induced them to return peaceably  to their homes.

In the Isle of Ely, also, an immense body of armed fen men are said to have attacked the house of the Rev. Mr. Vachel, a Magistrate resident at Little Newport, which they destroyed, after despoiling it of its most valuable property, having brutally turned Mrs. Vachel and her daughters out of the house, to seek asylum at twelve o’clock on Wednesday night.

NORWICH, MAY 22. —A Court of Mayoralty was, held on Friday morning, when strong measures to preserve the peace were determined on. At sun-set a Captain’s guard of the West Norfolk militia were marched into the Hall; the Norwich Yeomanry cavalry under Capt. Hudson, assembled at the Swan Inn; a detachment of the 1st Royal Dragoons were under arms at the Horse Barracks; and the magistrates,constables, and a number of the respectable inhabitants, at the same time were assembled at the Hall. These demonstrations had, to a considerable degree, the desired effect; nevertheless a large mob collected, who shewed a bad disposition, by breaking a number of lamps, windows, &c. The Magistrates and their assistants therefore proceeded in a body to the Market-place, and the Riot Act was read: several of the mob having surrounded them and behaved in a disorderly manner, three were taken into custody, and the rest refusing to disperse, after some had been allowed to do so, the military were called in, and were on their appearance received with volleys of stones, and their horses alarmed by throwing a large fire ball; they, however, succeeded in driving their assailants out of the market and dispersing them in every direction; several who resisted were committed to the gaol, and before eleven o’clock, every thing was quiet. We are sorry to add, that several of the Yeomanry Cavalry received cuts and bruises from the stones, and one gentleman was thrown from his horse, and the animal falling upon him he was severely injured, but is now in a convalescent state. On Saturday the Magistrates issued a Proclamation, and having the same forces ready for preserving the peace, the market and streets were cleared at an early hour, without any damage being sustained. On Monday morning the persons who had been taken into custody were brought up for examination, when two were committed to gaol, and several bound over to take their trials at the Sessions and Assizes.

In consequence of a cargo of potatoes being about to be shipping at the quay of Bideford, a great number of people collected, armed with bludgeons and other weapons, to prevent the exportation taking place. The police of the town apprehended three of the ringleaders, and confined them in the town prison. Immediately on the event being known, an immense number of shipwrights and others beat off the police, broke down the prison doors, and released the prisoners. An express was then sent off to the North Devon Yeomanry, who promptly assembled: the mob was immediately dispersed. The cavalry remained under arms, and patrolled the town during the night. On Saturday several of the rioters were apprehended, and four of them sent off to Exeter, under an escort of the North Devon Yeomanry cavalry. On information being given that a great number of disorderly people were collecting at Appledore and Clew-houses, the cavalry proceeded to the latter, in order to secure about 30 or 40, who were arming themselves with various weapons. Immediately on the troops appearing, the offenders went on board a ship, which was surrounded by the tide, lowering down the boats, and went off to the Braunton side of the water, and made their escape. We are happy to say no lives have been lost. Too much praise cannot be bestowed on the North Devon Yeomanry, for their exertions and behaviour in quelling the progress of the mob in its infancy. Soon after which forty of the Enniskillen Dragoons arrived, and relieved the Yeomanry, who had been on duty during two nights.