Some time after 6pm, 13 March 1816, a house in Shabbington Wood, Buckinghamshire. It was when she saw him snatch up the candle and head for the stairs that Bet Hawes took her chance. She was bleeding from the throat and her hand was gashed where she had grabbed Raisin’s knife, and she was dazed from the blow to the head he had given her, but she knew she had to get help or die trying – and that Elizabeth Yorke’s six-year-old grandson asleep upstairs might be his the next victim. There was no hope for the old lady bleeding on the stone floor. She was probably dead or would be soon. 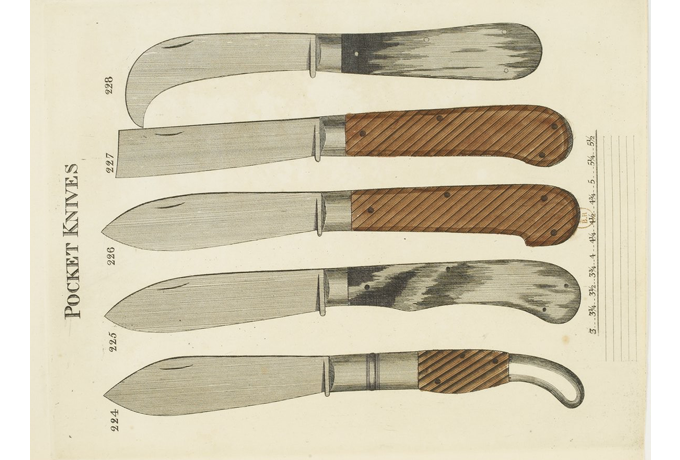 Illustration of clasp knives from Smith’s Key, or “Explanation or Key, to the various manufactories of Sheffield: with engravings of each article designed for the utility of merchants, wholesale ironmongers and travellers,” published in 1816. The catalogue is available as a free download at http://gallica.bnf.fr/ark:/12148/btv1b8529037p

As quietly as she could she crept towards the door, unbolted it and turned the lock.

Out in the cold night air, she was running and stumbling through the woods and fields, climbing through hedges towards Farmer Griffin’s place, half a mile away at Oakley. As she got near, a light from the windows told her that the family was still up. Then she was rattling the front door, shaking the latch, willing someone to come quickly. She could hear the voices inside but no one opened the door. Instead, when she went to the window, she saw his servant staring through it, round-eyed and terrified. Then Farmer Griffin and his brother appeared. But Bet had no words. Wildly, she passed her hand across her neck, miming throat-cutting.

It was like some ghoulish game of charades. Still they did not open the door.

Turning, Bet headed for a hedge to rest against. As her knees buckled, she knew she would have to try once more. She headed for the front door and shook it, but again the inhabitants shouted at her to identify herself.

“You are strong enough to go to the door and shake it. Therefore you may tell who you be, and what is the matter with you. If not, here you shall not be!” they said.

It was useless. She could not speak; they could not understand her. She turned and fell to the ground.

Minutes later, the door opened and Griffin and his brother came out. They hauled her inside and put her before the fire. Only at the last minute had they seen who she was and that she was covered in blood.

Sarah Brown, the Griffins’ servant, took a handkerchief from Bet’s dress and tried to stem the bleeding.

“My dear, could you tell me who this was that done this?” she said gently.

That eighteen-year-old Bet Hawes lived was seen by her family and neighbours as nothing short of miraculous. Her head was badly gashed but when Raisin’s knife sliced across her throat, it must have just missed the jugular. The doctor came swiftly and dressed her wounds.

That Raisin had not harmed little Thomas Hawes Yorke was equally astonishing. A party of local villagers who came to search the house for the felon found him still asleep upstairs.

But no one was surprised that his grandmother, Mrs. Yorke, did not survive. Her throat had been cut in four places and the upper part of her skull was “literally split in two”. She had been the first object of Raisin’s fury and desperation.

Why Thomas Raisin was in such desperate need of money that he came to Widow Yorke’s house on the evening of 13 March to borrow some is not known. He must have known that she would probably refuse him. Elizabeth Yorke was described by Richard Field, a former servant, as a “passionate” woman, a euphemism for strong-willed and stubborn. Just a few days before the murder, Field had had words with her about wages owing, although in the end they had settled amicably. Perhaps Raisin, who came to the house armed with a clasp knife, predicted that she would resist and planned to take money by force. If so, he knew he would have had to commit murder. Living witnesses would ensure that he swung.

He was found easily enough, hiding in the chimney at his father’s house. He pointlessly denied the murder and claimed he knew who had done it.

The witnesses against him were utterly consistent and Bet Hawes’ account was clear and shocking. Raisin had gone to Mrs. Yorke’s at 6 or 7 in the evening, tried for over an hour to persuade her to lend him money, and, when she asked him to leave so that she could go to bed, locked the front door and slit her throat with a clasp knife, throwing her to the floor. Bet Hawes, who had been at her needlework, jumped up and tried to intervene but Raisin cut her throat too. She had managed to get the knife from him, close it and throw it somewhere in the gloom. Raisin then grabbed the bar of the door and struck her around the head. He went to the dresser and found another knife, again slit her throat and left her for dead.

As she lay on the floor she could hear him riffle through the drawers looking for money. Then he took the candle and went upstairs to look for more. That was when she unbolted the door and made her escape.

By the time of the trial,1 Raisin had had time to consider his position. He knew he would would be executed but he appears not to have been truly contrite. On his behalf his lawyer Maurice Swabey read out a statement in which he accepted that his crime called for “the heaviest indignation of the law” and expected to appear before a “more awful tribunal” (God) but pleaded for the sake of “those, who innocent themselves, have already suffered to much from their connexion with me” (his father, his wife and his about-to-be-born child) that there would not be “any unusual exposure of my person”. There was no mention of the victims of his violence.

Raisin’s phrase “unusual exposure” referred to a local petition calling for his body to be hanged in chains near the crime scene. Hanging in chains, also known as gibbeting, was the practice of leaving a criminal’s dead or dying body on public display in order to deter others. Here, however, the motive seems more vengeful, as if hanging alone was too good for Raisin.

Raisin died on 2 August 1816. The Windsor and Eton Express called him “a most hardened wretch” 2 who died without remorse. His body was not left hanging in chains but given to doctors for dissection.

“A Barrister” published an account of Raisin’s trial3, including affidavits, and donated the profits to Bet Hawes.