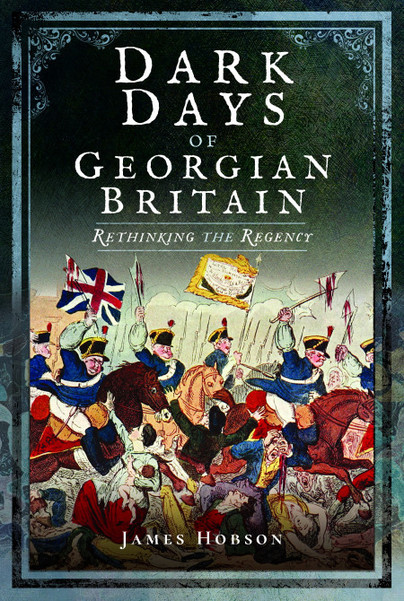 Oh, how I wish James Hobson had been my school history teacher. I loved history, naturally, and indeed my history teachers (shout out to Mrs Woodings and Miss Piachaud, wherever you are) but still, if I had had Mr Hobson to take me through what it meant to live during the Regency the whole era would have been so much more vivid and my O-level so much more of a pleasure. As it was, I duly learned about the Congress of Vienna but never properly understood what the end of the Napoleonic Wars did to British politics.

James Hobson, a fellow Pen & Sword writer and indeed a history teacher for 25 years, writes the excellent About 1816 blog and is on twitter as @about1816. Our interests, in bringing forth the forgotten voices of late Georgian Britain, overlap a great deal, and I certainly learned a great deal from the insights this book offers, which is presented in an accessible style full of information about real lives. It’s an excellent read, apart from anything else.

What Hobson does is look at the lives of the poor and relate them back to the actions and attitudes of the rich and the effect of political events. It is a welcome antidote to the standard branding of early 19th century as somehow mostly peopled by lovely ladies in gorgeous frocks and handsome men in military garb. In general, the privileged do not come out of the book well: selfish, bullying, snobbish. So what’s new?, I hear you say, and indeed many have compared the dynamics of our 21st-century political landscape to those of the Georgian era. Hobson does this himself with both grace and force.

Every chapter gave me new perspective on familiar issues and fascinating, and often appalling, stories to go with them. I was particularly impressed by the chapters on currency, child labour, the Irish in Britain and suicide. Other topics covered include attitudes to the Prince Regent, the Peterloo Massacre, Arthur Thistlewood, the Cato Street conspirator, bodysnatching – and much more besides.

There is a bias towards the stories of male people, and I would have liked to have seen a chapter on prostitution, for example, in the mix, but otherwise, in all respects this is excellent, lively history, written with both passion and compassion.