In the summer of 1807 Byron, then aged 19, boasted of swimming from Lambeth Bridge to London Bridge. In a letter to his friend Elizabeth Pigot, he wrote: “Last week I swam from Lambeth through the 2 Bridges Westminster & Blackfriars, a distance including the different turns & tacks made on the way, of 3 miles!! You see I am in excellent training in case of a squall at Sea.”

The first time I saw Lord Byron, he was rehearsing the part of Leander, under the auspices of Mr. Jackson the prize-fighter. It was in the river Thames, before he went to Greece. I had been bathing, and was standing on the floating machine adjusting my clothes, when I noticed a respectable-looking manly person, who was eyeing something at a distance. This was Mr. Jackson waiting for his pupil. The latter was swimming with somebody for a wager. I forget what his tutor said of him; but he spoke in terms of praise. I saw nothing in Lord Byron at that time […] so, contenting myself with seeing his Lordship’s head bob up and down in the water, like a buoy, I came away. Leigh Hunt, Lord Byron and Some of His Contemporaries: Recollections of the Author’s Life and of His Visit to Italy, 2 vols (London: Henry Colburn, 1828), 2, p. 1.1

Byron, who had a deformed foot, loved swimming, whether in the sea or river, as it was both an opportunity to demonstrate his physical strength and a symbol of personal freedom. He cannot have minded the filth he encountered in the water, which was a dumping ground for the many dwellings and manufactories on the banks.

In the 17th century swimming was popular with the noblemen whose palaces fronted the Thames and by the 18th was considered a sport, but for upper-class men only. It was not anything like bathing and was definitely not for ladies. Working men did not generally swim. They rarely had time for leisure activities, and those whose occupations were river-based saw the Thames primarily as a highway for transporting people or goods from one place to another.

With that in mind (as well as the recent warning to people considering wild swimming), I searched out these three Georgian-era images of men swimming in the Thames. 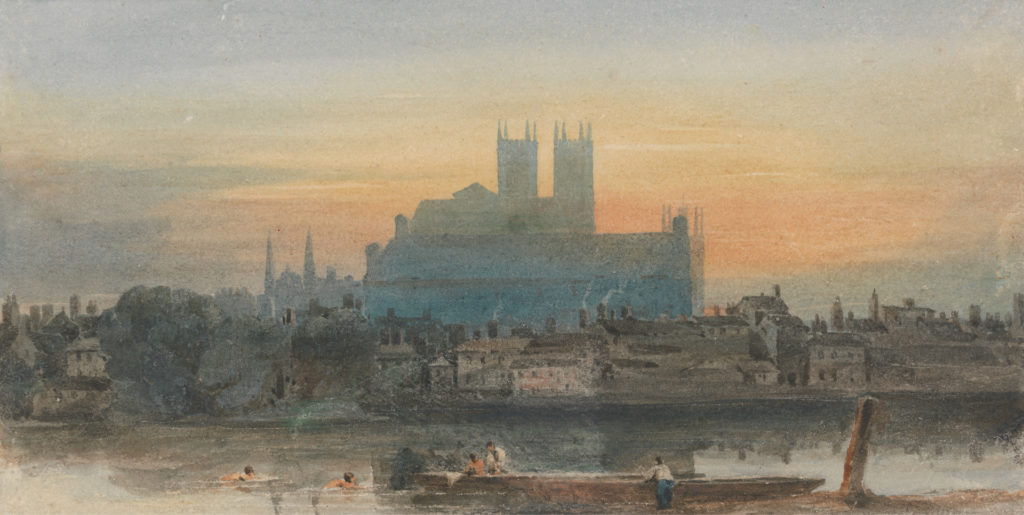 David Cox’s watercolour Westminster From Lambeth features naked male swimmers on the Lambeth side of the Thames, attended by boatmen. The view shows the double spires of Westminster Abbey in the background, with St Margaret’s Church to the left and Westminster Hall in front. Cox’s artistic career was initially in the commercial sector: he was apprenticed to a miniature painter and later employed as a scene-painter at Astley’s Theatre (which was close to the spot where Cox sat to paint – on the walkway behind St Thomas’s Hospital), but by his mid-20s he was travelling around England and Wales painting watercolour landscapes. From 1805 he was exhibiting regularly at the Royal Academy and hired himself out as a drawing-master to the aristocracy, eventually becoming a grand old man of the watercolour scene. 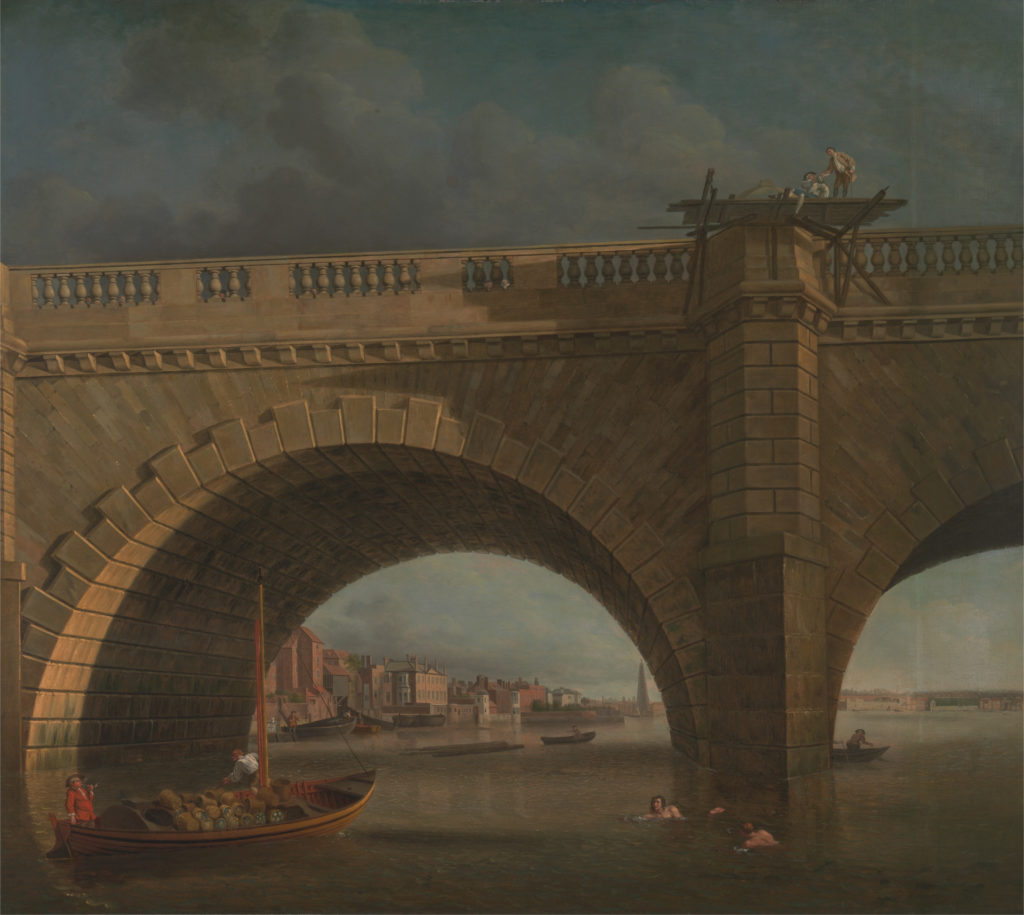 Over sixty years before David Cox painted this, Samuel Scott chose to depict a couple of muscular swimmers in the water near a pier of Westminster Bridge. In the distance, approximately where Gordon’s Wine Bar in Villiers Street is now, stands the 21-metre-tall octagonal York Buildings Water Tower, which was built in the late 17th century  (it was gone by the time Victoria Embankment was redeveloped in the 1860s).2 Scott, who started his career as a maritime artist painting ships, was sometimes called the ‘English Canaletto’; he often painted river scenes, especially Westminster Bridge. 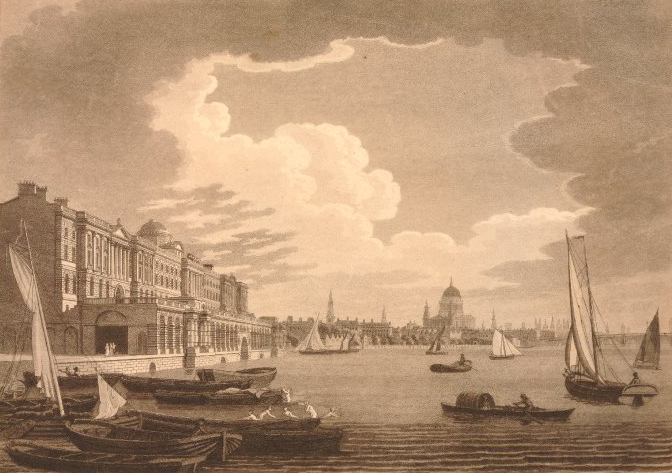 View on the River Thames; illustration to the Picturesque Tour. 1796 Etching and aquatint. © The Trustees of the British Museum.

This print showing Somerset House on the left and St Paul’s in the background to the right of centre, with Blackfrairs Bridge on the right, has naked figures swimming off barges moored in foreground. As in the previous image, public nakedness – at least in males – seems to have been accepted.

For lively posts on Regency swimwear and bathing machines visit my friends Sarah Murden and Joanne Major at All Things Georgian blog.