The children have left home… (almost). I need to do more exercise… (too inclined to be at my desk). Our dear cat has ascended to feline heaven… All this means we are now, apparently, contemplating Getting a Dog. I am a dog virgin so this is a whole new world for me.

Naturally, this topic set me to thinking about the depiction of dogs in the Georgian era.

I’ve chosen five breeds to look at, starting with the Labrador and the Poodle, only because should we acquire The Aforementioned Dog, it will likely be a Labradoodle, bred, I am assured, to combine the Lab’s good nature and the Poodle’s intelligence.

Despite its name the Labrador is not from Labrador but from Newfoundland. One school of thought says that before the arrival of Europeans, there were probably no dogs in the area and that the first settlers, most of whom were fishermen from south-west England, brought their own dogs with them. These dogs had short oily coats and were ancestors of the Newfoundland, a large dog interbred with the Mastiff in order to haul carts in the inhospitable climate, and the St. John’s Water Dog, the forebear of the Labrador. The St John’s was adept at retrieving nets, lines and ropes and diving underwater to get fish that had slipped from their hooks. The breed has died out but traces of its white chest, feet, chin, and muzzle can be seen in the occasional white patches on modern Labs. 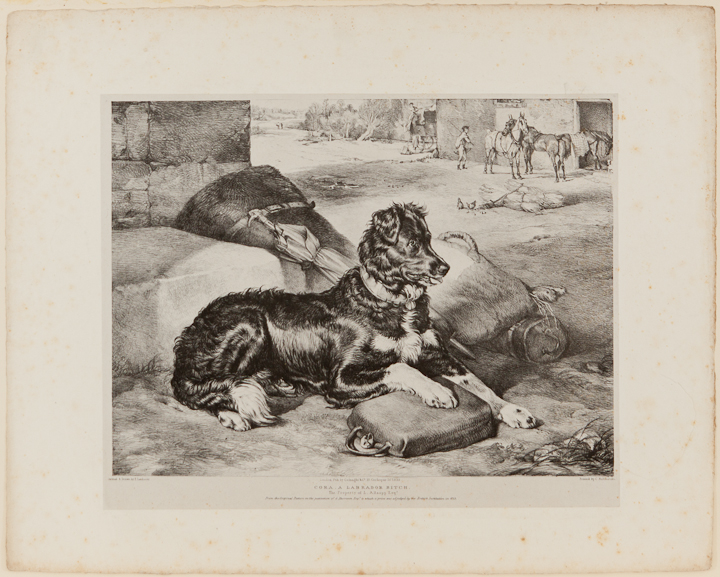 The poodle is thought to have originated in Germany and been introduced to France by German soldiers. Prized for its elegance and therefore much favoured in the royal courts of Europe, appearing to Louis XVI as his pampered companion, it was also a working dog of high intelligence and with a strong hunting instinct. The oldest variation, the Standard, was used as a water retriever and, from the 17th century, a military dog. 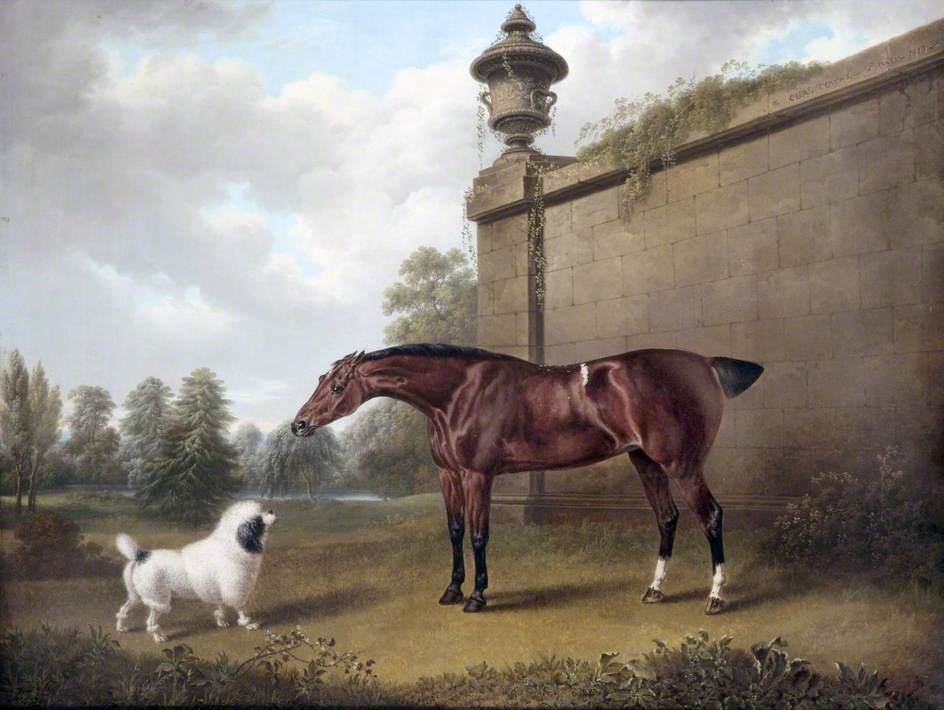 Hogarth’s Pug looks rather stringy and long-limbed compared to modern, compact versions and does not display the characteristic three winkles and a vertical bar on the forehead that resemble the Chinese character for ‘prince’. The breed originated in China and came to Britain through trade links. 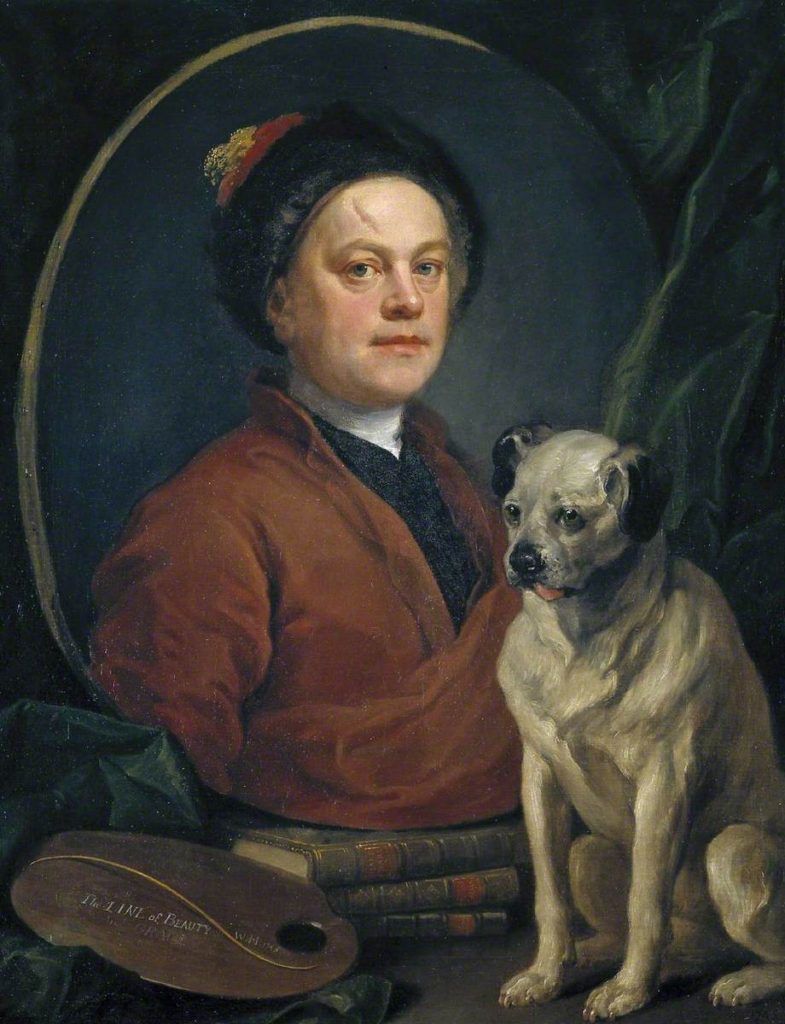 William Hogarth, The Painter and his Pug (1745). Photo credit: Tate

The Pug’s small size made it popular as a lapdog for genteel ladies. Hogarth owned several Pugs, of which Trump was probably the most well known. Possibly the Pug was not popular with Jane Austen, who assigned one to the appalling Mrs Norris in Mansfield Park. Henry Bernard Chalon, A favourite Pug bitch; A Pug dog (one of a pair). Sold at Bonhams 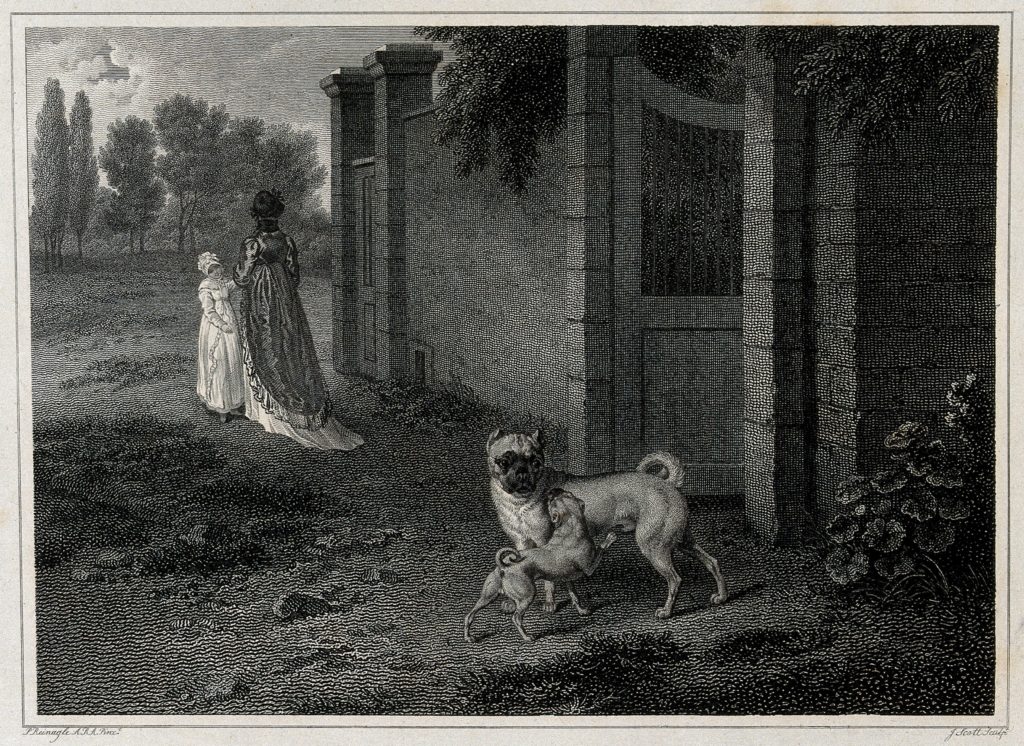 J. Scott after Philipp Reinagle, A small and a large pug are standing outside the gate of a walled garden (1804). Wellcome Images, London.

The English Bulldog, whose tenaciousness is viewed by some as an embodiment of the spirit of the nation, was originally used by butchers to hold wild bulls, its powerful jaws able to lock on to the bull’s nose long enough to allow a rope to be put round its neck. The Bulldog was also used for ‘sport’ – to bait bulls and to fights other bulldogs. After the 1835 Cruelty to Animals Act outlawed bull- and bear-baiting the Bulldog developed into a shorter, squatter dog with a notably kind nature. 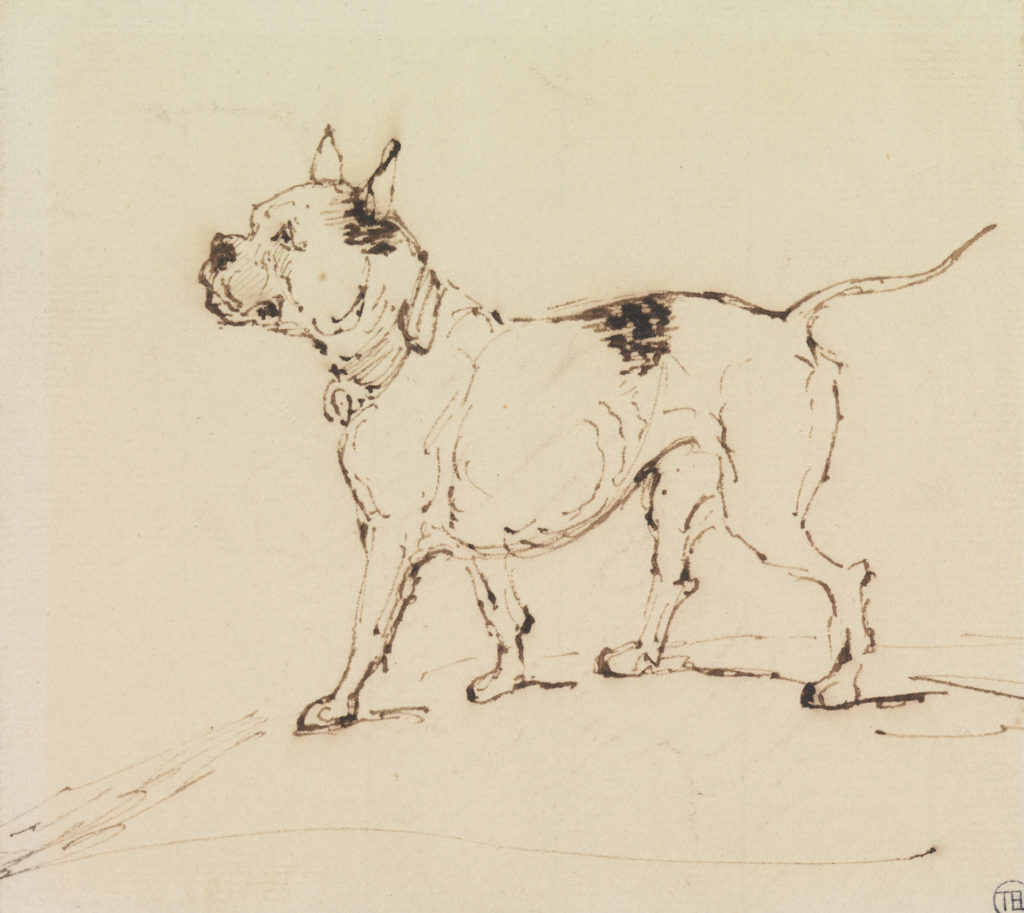 Finally, the Greyhound, whose origins stretch back 4,000 years to Egypt where its ancestors were depicted on the walls of a tomb. The Greyhound has long been associated with royalty and aristocracy and was traditionally used in the hunting of game and in coursing (two hounds chasing a flushed rabbit or hare in an open field). 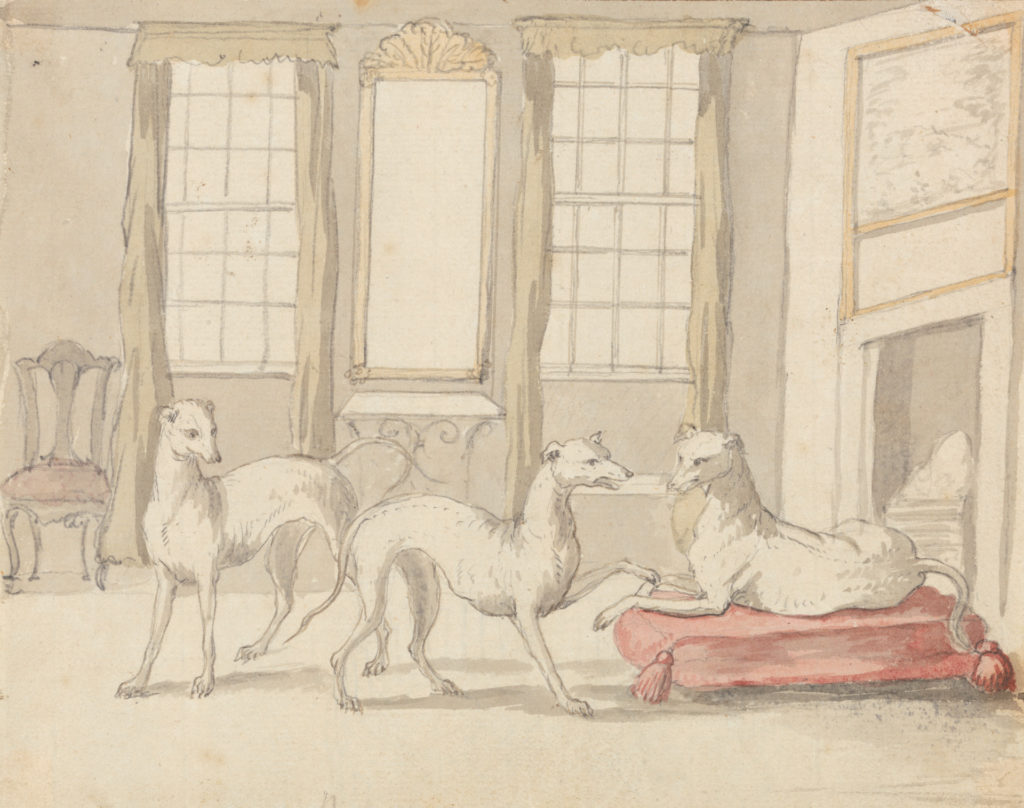 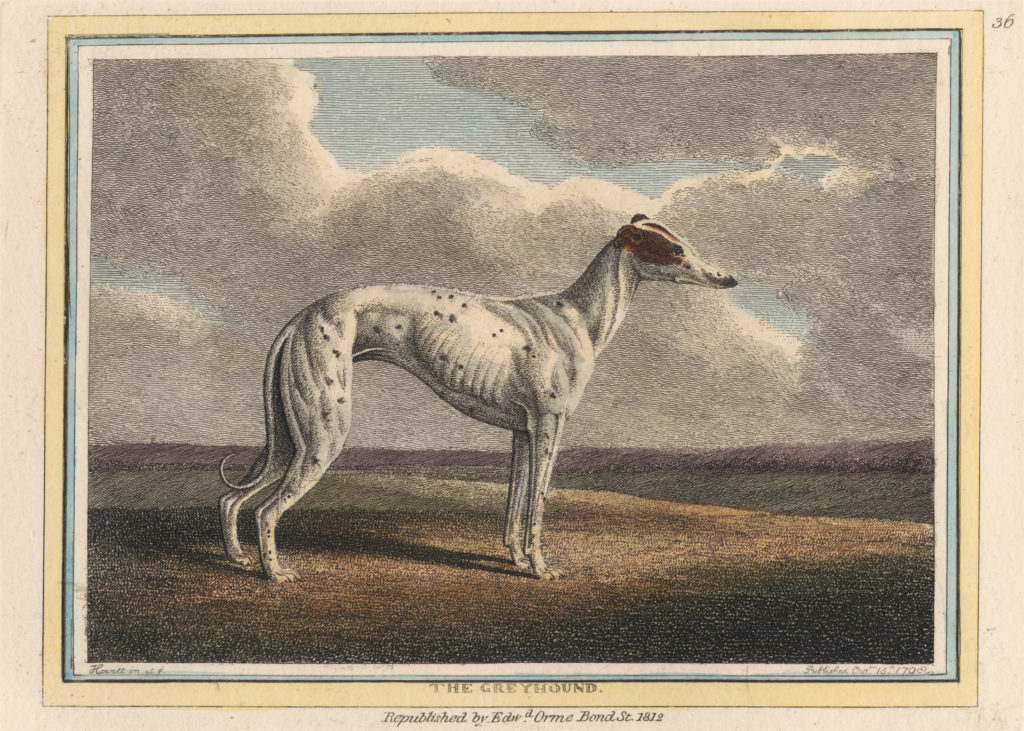