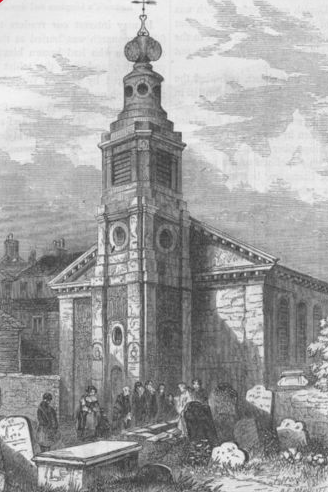 This story, whose tragic subject’s name caught my eye, illustrates a pitifully sad way to depart what must have been a hard and comfortless life. It was not a particularly unusual death but what does stand out, to me at least, is the compassion of those who tried to help her, even as they were trying to encourage her into her home parish in order to avoid a financial burden on their own. 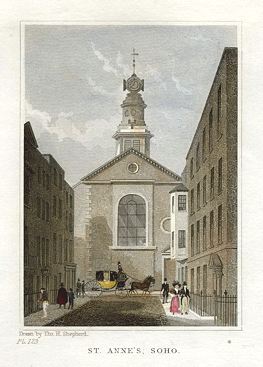 Margaret Thatcher lived in St. Giles, the notorious “rookery” between the church, Russell Street and Seven Dials. It would probably take you or me 10 to 15 minutes to walk from there from Soho Square but she was mortally sick and never made it.

While starvation seems to have played a part in her death it is by no means certain that poverty was the direct cause. A wasting disease or any of several types of cancer could also account for her emaciated condition. There would have been no cure and scarcely any treatment for those diseases, whether you were rich or poor.

There is no indication of Thatcher’s age, only she was of “respectable appearance” and seems to have “seen better days”.

CORONER’S INQUESTS. — An inquisition was taken on Monday, at the Golden Lion, Dean-street, Soho-square, before Hugh Lewis, Esq. upon the body of Margaret Thatcher, who was found in a state of starvation on the steps of Mr. Parkes, corner of Carlisle-street, Soho-square, on Friday last by a watchman, who assisted in taking her to St Ann’s Watchhouse; she died before she arrived there.

—John Peart, watchman of St. Ann’s, 3, Haydon street, Swallow-street, said that on Friday night, about 9 o’clock, he was going his rounds, and saw the deceased sitting upon the steps of Mr. Parkes’s door in Carlisle-street. He asked her what was the matter, and she answered that she was very ill and very cold: she begged to be taken to a fire. He asked her if she knew the people, who lived at the house where she was sitting; she replied no: he knocked at the door, and the servant gave the deceased some warm water, at her request. She drank it, and he gave her a glass of gin at a wine-vaults near Mr. Parkes’s house; he was obliged to assist her to walk, she was so weak; when she got opposite Mr. Joseph Bank’s house1 she could not go any further: he called the next watchman, to take her to her own parish; she complained of being very ill, but did not say what was the cause of her illness. He gave her a piece of bread, which he had in his pocket: she ate part of it: she appeared to be too ill to eat. She was quite sober; and, by her respectable appearance, she appeared to have seen better days. He delivered her into the care of Chapman, the watchman of Soho-square.

—Wm. Chapman, watchman of Soho-square, said, that on Friday night, about ten o’clock, the former witness gave the deceased into his care, to take her to St. Giles’s where she lived: he said that the deceased was very ill; he assisted her to Greek-street, Soho-square, and she grew so very weak that she could walk no farther. He called several watchmen, and they carried her to St. Ann’s [known more usually as St. Anne’s] watch-house2 He thought she was tipsey, as she could not walk. When they arrived at the watch-house, the deceased was apparently quite dead. He left her to the care of the night constable.

—Joshua Ively, beadle and constable of the night at St. Ann’s watch-house, said, that the deceased was brought into the watch-house on Friday night, about ten o’clock by four watchmen. Her face was in a cold death sweat: he had no idea of her being dead, though he thought she was dying. He sent for the parish doctor, Mr. Jennett, who came and examined the deceased, and bled her: he also used other methods to recover her, but without effect. He said that she was dead, and he could not do any more for her. He (witness) searched her pockets, and found one penny, and 54 duplicates [counterfeits] in them.

—The Coroner said, that he was certain the jury would return a verdict in a conscientious manner; and if it was their opinion the deceased died for want, they would return their verdict accordingly, and not care about throwing a slur upon the parish.

—Died by the visitation of God.