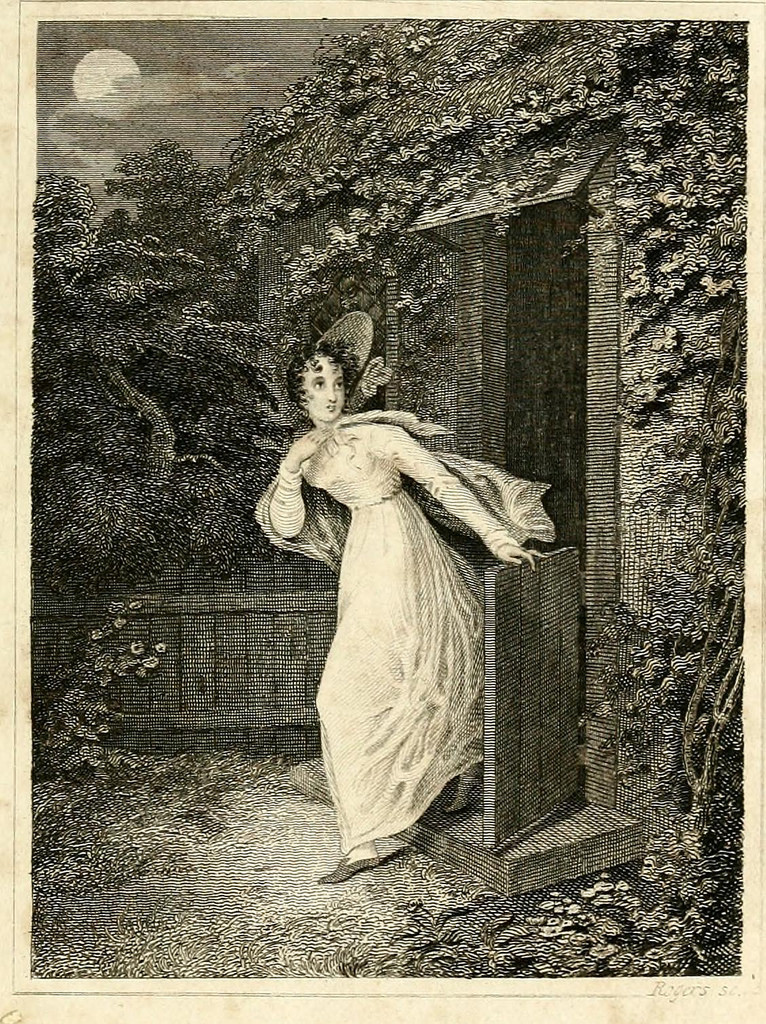 Illustration from Emily Moreland, the Maid of the Valley by Hannah Maria Jones. London, 1829

In November 1809 Augusta Nicholson who, through the death of eight relatives, was due to inherit a fortune of  £14,000 on her 21st birthday, ran away with John Giles. Giles was a ‘comedian’ (we would call him a comedy actor) performing with Mrs. Baker’s Company at Tunbridge Wells, where Augusta was staying with her widowed stepmother.

Mrs. Nicholson was told of the attachment and tried to stop it by confining her stepdaughter to the house, but Augusta carried on the romance by exchanging letters with Giles through the keyhole of the street door and talking to him at the window early in the morning. This went on for 5 weeks before Augusta and John eloped to London.

Giles was “destitute of the most needful article, money, for carrying on such an exploit,” so he persuaded his friend, Mr Smith, also a performer, to lend him some £30 (which was all he had). He and Smith walked from Tunbridge Wells to Sevenoaks, where they hired a chaise and four, and returned to Tunbridge Wells, stopping outside the town while Giles collected Augusta. She took with her only one change of clothes.

A day later Mrs. Nicholson wrote to her daughter’s trustees and employed the Bow Street runner Harry Adkins and his brother to trace the fugitives. They discovered that the couple had reached the White Hart Inn at Bromley, where they had changed horses and then proceeded at full gallop to Marshgate Turnpike on Westminster Road and got in a Hackney coach. They traced the couple to 47 South Molton Street, where Augusta lodged for two days while Giles visited.

The officers then lost the scent but they later received information that the couple were at 37 Westmorland Place, City Road, lodging with a Mrs. Steele. Adkins knocked and asked for Giles; the landlady said he was eating. Adkins then entered and addressed Giles by name. He answered but denied he had ever been at Tunbridge Wells. Dr. Cardale, solicitor and trustee to the Nicholson family, arrived and identified Augusta.

Both lovers rushed to each other’s arms and swore attachment, beating their heads and running round the room. Augusta agreed to go with the officers but said she must first go upstairs to collect her wedding ring. It seems that the couple were on their uppers. They had been due to marry at Marylebone but had spent the £30 and owed their landlady for board and lodging.

At the Court of Chancery Giles’s friend Smith at first denied involvement but was told he must produce Miss Nicholson to the court on pain of punishment for conspiracy if he failed to do so. Mr. Giles, Mr. Stubbs of South Molton Street, and Mrs. Steele, of Westmoreland-place, received notices to appear before the Lord Chancellor the same day and Giles was briefly imprisoned in the Fleet.

It is somewhat surprising that despite the opposition of Augusta’s family, the couple married in April 1810. Augusta must have been pregnant or the weight of her scandalous elopement was too much for the Nicholsons to bear. Tragically, Augusta died soon after giving birth to a son, leaving her husband and child with nothing – she was four days short of her 21st birthday, when she would have come into her fortune. That money was now her brother’s. He was a naval captain and promptly sailed back to England to claim it. However, he died in September 1811 en route, and as there were no other legatees, it reverted back to Augusta’s son.

On Wednesday se’ennight Miss Augusta Nicholson, daughter of Colonel Nicholson, a ward of Chancery, with a fortune of £14,000 eloped with Mr. Giles, the comedian, from Tunbridge Wells. The family reside at Worcester; the Colonel is, we understand, at the Isle of Wight: the young lady’s mother is dead and the Colonel is married to a second wife. Miss Nicholson has become entitled to the large fortune of £14,000 when of age, in consequence of the death of eight relatives since 1803. During the Colonel’s absence, Miss Nicholson and her mother-in-law [stepmother] visited Tunbridge Wells, at which fashionable place the parties first became acquainted. Mr Giles’s first introduction to the lady was by an offer to carry some books for her from the library.

On the following evening she went the theatre accompanied by her mother-in-law, and sat on the front seat of the stage-box; and while Mr. Giles was performing close to the box, Miss N. contrived to drop a letter to him unobserved, which he picked up also unperceived by the mother-in-law. In that letter she acknowledged her attachment to him, and gave him encouragement to pay his addresses to her, and that she would marry him. From that time, a mutual intercourse and correspondence took place, in which the warmest affection was expressed.

They married in the end…

but…
DEATHS.
On the 24th of September last, in Plymouth Sound, on his return from Portugal, Captain Nicholson, brother to the late Miss Nicholson, who married Mr. Giles, late of Mrs. Baker’s Company of Comedians, of Maidstone, and who died four days previous to her attaining the age of 21, leaving an infant son; – by her death the brother became entitled (as the only surviving legatee) to her portion; it is understood his return to England was to take possession of this funded property, leaving the father and infant under many pecuniary and unavoidable embarrassments, but by his sudden and immediate death, the infant becomes intitled to the whole of his mother’s portion.