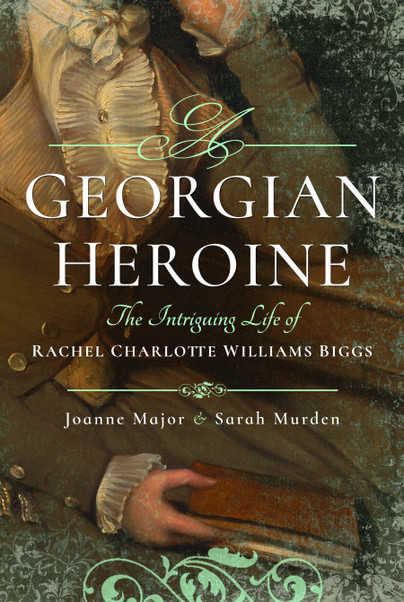 For their third book, Joanne Major and Sarah Murden, who specialise in bringing out obscure personalities from the hidden folds of history, have chosen Rachel Charlotte Williams Biggs (1760s–1827), who was born in respectable ‘middling’ circumstances, suffered severe trauma in a series of shockingly brutal events, and went on to build a new life as a political commentator, propagandist and playwright and more.

As the authors point out, few would have guessed on meeting the middle-aged Charlotte (her preferred moniker), who was attractive and somewhat serious, that she hid such a traumatic past. As a teenager she had been targeted by a psychologically disturbed neighbour, Richard Heaviside, who with the aid of accomplices kidnapped, imprisoned and brutally raped her. The baby that resulted was removed from her and died. Charlotte managed to escape from Heaviside with the help of friends but, after a few months respite hiding in Wales, he came for her again, and was returned to his control. Now, however, he proposed marriage. The similarities to the plot of Samuel Richardson’s Clarissa are unavoidable.

It is little wonder that when Charlotte was finally released from Heaviside’s clutches, having refused marriage, she looked to France, where she had been educated as a young girl, for refuge. Here allied herself to Benjamin Hunt Biggs, one of the many peripheral characters in the tale, with whom she appears to have made some kind of marriage arrangement (no proof of actual marriage has been found), possibly of the lavender kind. However, ironically, they ended up imprisoned at the behest of the Revolutionary government of France. Charlotte’s life at this point seems to have been a sequence of confinements.

What is amazing is that on her return to England Charlotte chose not to sink into obscurity but instead sought to give voice to her thoughts and ideas. She published her experiences in France and wrote What Is She?, a comedy of errors which was performed for six nights at the Theatre Royal the stage.

Charlotte’s reinvention of herself did not stop there. She was determined to propose a solution to starvation amongst the poor, who were threatened by the rising price of bread, and published it as a pamphlet, A Maximum; or, the Rise and Progress of Famine, addressed to the British People. She managed to get William Wilberforce to mention it in the House, although he credited it to ‘a gentleman’.

It is a telling moment. All women lived in a man’s world. They could be politically engaged but had no agency. They had no property rights, reduced legal rights and minimal human rights. Rape laws were stacked against them. Heaviside built a career in the law and made a respectable marriage. He was not ‘ruined’ by his appalling behaviour. No wonder Charlotte seems never to have regularised her relationship with Mr Biggs. In her will she was described as neither wife, nor widow, nor spinster, indicating perhaps that she refused to be defined by her marriage status.

Charlotte kept herself busy, and among other projects proposed and organised the nationwide celebration of George III’s jubilee, with festivities held in villages and towns across the country, which she insisted should include collections for the relief of the poor.

Charlotte’s literary works are largely now forgotten but it is her extraordinary and dramatic story that intrigues. It is not for nothing that Major and Murden have used this word in the subtitle, for there remain a number of unanswered, and unanswerable, questions. While endorsing the essential truth of Charlotte’s account of her French imprisonment, they are sceptical about various details, and indeed prove some of it to have been impossible. Charlotte’s description of her double abduction is similarly forensically examined. It is possible that she glossed parts of it. Georgian understanding of rape was simplistic. Rape involved an unexpected attack, screaming and violent resistance. It was a fate worse than death, and indeed the reputation of a dead rape victim was easier to defend than a live one. Ideas of grooming or Stockholm Syndrome were unknown.

Previous subjects covered by Major and Murden, a well-known blogging duo (their website All Things Georgian is hugely popular for the breadth of subject and the deft way they tackle complex topics), were Grace Dalrymple, aristo and courtesan, and the two extraordinary marriages within the Bentinck family. As genealogists, they have a great facility for picking apart and exposing the family and social networks that connect Georgians, however obscure. The book includes tangential portraits of some well-known Georgian personalities: the architect John Nash plays a role as a friend of Heaviside, as does Richard Brinsley Sheridan; Henry Addington, General Sir David Ochterlony, Nicholas Vansittart, William Cobbett also feature.