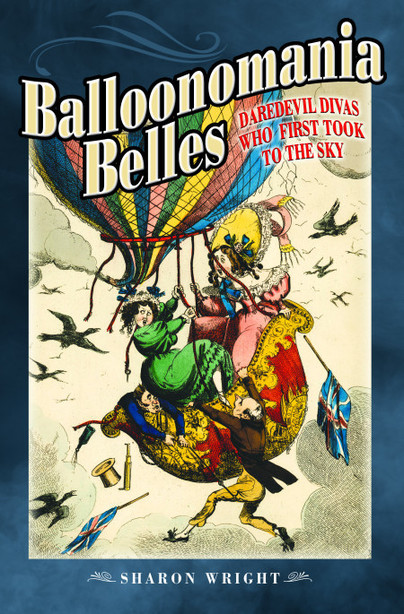 Who knew? Not I. I had never heard of these myriad brave female aeronauts, who have been written out of history, their perilous escapades all but forgotten. But they are sidelined no longer. Sharon Wright has restored them to their rightful place, not as pretty (and mostly conveniently light) assistants to male balloonists but as the main event. Two hundred years ago, it seems, the world could not get enough of female balloonists.

This lively account relates the stories of the most prominent of them. And what a bunch they were!  My favourite is Mrs Letitia Sage, an actress of old-fashioned proportions, whose refusal in 1785 to disembark from one of Lunardi’s balloons ensured that she was the first English woman to fly.

But Mrs Sage has several contenders. The diminutive Sophie Blanchard, almost pathologically shy but also utterly fearless, was appointed Napoleon’s Aéronaute des Fétes Officielles, with responsibility for organising ballooning displays at all major public events in Paris. She specialised in night-time ascents involving fireworks, until she pressed her luck for the last time. In 1819 the gas in her balloon ignited and she made a dramatic and fatal descent. But there are plenty others: the plucky teenager, Jane Stocks, who survived her companion’s fatal fall in 1825; Dolly Shepherd, who popularised an act in which she ascended several thousand feet hanging on to a trapeze, from which she released herself and dropped back to earth by parachute…

The book covers the period from the first female ascent in 1783 right up to the beginning of the 20th century – that is before the advent of airplanes changed everything aeronautical – and spans Britain, Europe and America.

Wright has presented her material well, and has an assured and readable style, with lots of colourful detail.